By
Nathan Schmidt
|
October 6, 2021
Three interns share what they learned this summer at Argonne, and how they grew as future science, technology, engineering and mathematics (STEM) leaders.

Each year, the U.S. Department of Energy’s (DOE) Argonne National Laboratory hosts a variety of undergraduate internships in the fall, spring and summer. Over the course of 10-15 weeks, the students gain a wealth of real-world research experience and leave with newfound understanding of and passion for science, technology, engineering and mathematics (STEM).

Three students who participated in the Lab’s internship programs this summer shared their stories about their summer research experiences:

When University of Florida student Colton Ginter first started searching for internships, he was unsure whether he wanted to pursue research as a career. Although he had multiple internship opportunities available, Argonne’s SULI program appealed to him the most. ​“When Argonne extended the offer, I felt like this was an organization that thought that I was worth it,” he explained. ​“I wanted to go somewhere where I feel accepted for my STEM research interests, and that’s what I felt here.”

“SULI has had the biggest impact on what I want to do. Here, I was able to both work and attend lectures on so many different topics. I loved what I got to do, and it was the best way I could have spent the summer.” — Colton Ginter, SULI intern

Unlike Ginter, fellow SULI intern Prani Nalluri already knew she wanted to enter a research-driven career, and she desired to develop her professional research skills through an internship. She applied for numerous internships, but she was surprised to receive an offer from Argonne. ​“It was the first offer I got, and I didn’t expect to get it, because I thought it was such a long shot to get an internship at a national lab. I was never going to say no if I got that offer. I’m glad it worked out.”

For returning intern Guadalupe Medina, coming back to Argonne was an easy choice. She first visited Argonne in high school on a field trip for the Science Careers in Search of Women conference, and since then, she has wanted to work at Argonne. Last year, Medina was selected to be part of the Lab’s CCI program. ​“I loved the environment and the people at the lab so much, and I learned a tremendous amount, so I wanted to apply again for another year,” she said.

Nalluri entered the internship without fully understanding what she would be working on, and she was surprised that the research project involved more coding than she anticipated. ​“Initially I became a little discouraged, and I thought, ​‘Where is the math? When do I get to apply this to something bigger?’” she said. ​“But then I realized the bigger picture. Research isn’t always groundbreaking — you have to lay foundations first.”

Ginter struggled through lots of trial and error before he successfully learned key skills like X-ray photoelectron spectroscopy for his research work. ​“The first three or four weeks, I was just learning, learning, learning, but I applied myself fully into the research,” he said. ​“When you devote 40 hours a week to learning something — courses in college only took up nine hours each week — you learn it really fast.”

Medina’s start was smoother than that of other interns, as she built on what she had already developed during her first internship at Argonne. Even so, at first, she was unsure where to lead her project, but she gradually figured out a path forward. ​“I kind of had an idea already of what it would look like, but then it began to shift in a new direction,” she said. ​“I was kind of glad it took that shift, because it allowed me to go into more detail in my project and look more into it than I thought I would be able to the first year.”

Over time, Ginter settled into a productive routine each week, as he steadily progressed through his data work. ​“It was really satisfying,” he said. ​“It was nice and fulfilling to start a week with raw data and at the end of the week see that I’ve processed all of it and can present my findings. I loved that workflow.” Ultimately, he found that the battery membranes they tested weren’t stable. However, they were conductive, and he began looking at other lithium salts as alternatives. ​“In the end, I put a lot of work into this, and things came out really well,” he said.

Although Nalluri’s progress with her coding was slow at first, her excitement built once she completed a module for the programs she had decoded. ​“The closer I got to making this module into a comprehensive replacement, the more excited I got,” she said. ​“An intern after me can pick up my research and make a lot of progress, because I definitely laid the foundations.”

“Just being able to get back into my project was a really nice feeling, because it’s something I developed myself,” Medina said. ​“To contribute to the science and to education was wonderful, as I was getting something done every day.” Although she was disappointed to discover that current educational coding STEM toys for 3-5-year-olds are less effective than she hoped, she believes her research can improve computer science education. ​“To me, the real value of the internship was getting to help the future computer science generation in learning more about STEM.”

In addition to her main project studying the effectiveness of educational toys for kids, Medina also created technical puzzles called anomalies for Argonne’s CyberForce Competition. ​“I enjoyed the creativity that comes with it,” she said. ​“Creating my vision of an anomaly was really cool to me.”

The summer internships finished with the annual Learning Off the Lawn event, where students gave virtual presentations on their internships. For many interns, the process of writing their final reports and preparing for the presentations took much of the remaining two weeks, but through their mentors’ support and perseverance, they were able to present their findings.

“Learning Off the Lawn is one of the most important components of the summer internships, as it helps the students realize just how far they have all come with their research,” said Argonne’s university student program coordinator Robert Schuch. ​“It’s not uncommon for mentors to later use parts of their interns’ work in their own publications, with the students’ names featured in the published works. So through these professional STEM presentations and reports, the interns are doing real-world research and contributing to Argonne’s science and technology.”

After two years at Argonne, Medina still loves the lab. She graduated from Joliet Junior College this spring, and she is transferring to Northern Illinois University to study computer science.

Nalluri is currently completing her undergraduate studies in Computational and Applied Mathematics and in Mechanical Engineering at Rice University, but now, thanks to her mentors’ encouragement, she also plans to go to graduate school and earn a PhD.

Ginter also plans to go to grad school thanks to his internship with Argonne, with his mentor providing advice on what to look for in potential schools, and he plans to apply for more internships at Argonne. ​“SULI has had the biggest impact on what I want to do,” he said. ​“Here, I was able to both work and attend lectures on so many different topics. I loved what I got to do, and it was the best way I could have spent the summer.”

This work was supported in part by the U.S. Department of Energy, Office of Science, Office of Workforce Development for Teachers and Scientists (WDTS).

A summer of growth: three interns’ summer experiences at Argonne

Next generation of STEM leaders present their work at Argonne 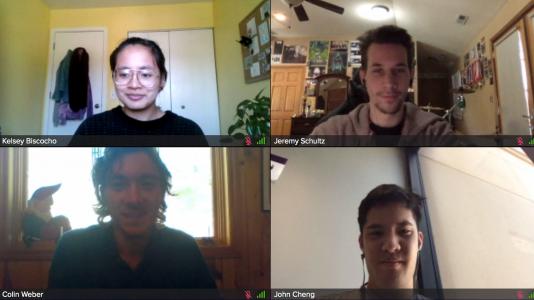