Scientists at the U.S. Department of Energy’s (DOE) Argonne National Laboratory are exceptional in many respects. Working in collaboration with the Imperial College London, for example, they have conducted research on a phenomenon in information processing systems called ​“exceptional points.” This phenomenon has found applications in microwave, optical and mechanical technologies.

“Our team experimentally detected an exceptional surface, a continuous three-dimensional curving surface of exceptional points,” said Xufeng Zhang, who led this international research project and works as an assistant scientist at the Center for Nanoscale Materials (CNM) at Argonne, a DOE Office of Science User Facility. Past research by others had detected exception points, and subsequent researchers had plotted lines of measured exceptional points, but this is the first time researchers have plotted surfaces.

“Our original contribution is to have mapped three-dimensional surfaces of exceptional points based on experimental measurements, and the result is strikingly beautiful graphs.” — Xufeng Zhang, assistant scientist at the Center for Nanoscale Materials

“Think of two systems, each of which has its own loss of energy to the environment,” explained Zhang. ​“Also imagine that these systems are coupled so that they can exchange energy between them.”

When these systems are far apart, little interaction occurs between them, and energy-related calculations yield two independent solutions tied to their interactions with the environment alone. As they approach each other and interact together, the systems enter a transition phase where there is only one solution. That is considered an exceptional point. As the systems move even closer, the exceptional point vanishes, and the calculations yield pairs of ​“hybrid solutions,” a mixture of the solutions for each system.

A possible application of exceptional points is sensors with greatly enhanced sensitivity to disruptions such as slight fluctuations in a magnetic field. Another application is mode conversion, which allows, for example, the signals from the two parties in a telephone call to be kept in separate modes, thereby essentially eliminating any undesired interference.

“Magnons are quantized quasiparticles associated with spin waves, a collective excitation of the magnetic ordering in a crystal lattice,” Zhang explained. ​“What is important here is that changing the magnetization at one point in the lattice affects the neighboring sites like a wave rippling through the surface of a placid pond.”

The team used a magneto-electro-optical spectrometer at the CNM to measure the response to different tunings of the photon-magnon coupling strength and position in their apparatus, then plotted the results in three-dimensional graphs of an exceptional surface.

While highly abstract and mathematical, this pivotal discovery could have real world impact in information processing. As one of several possible examples, information transfer demands that noise not corrupt the zeros and ones being transmitted, and exceptional surface mapping could help provide much greater protection for this process.

The researchers’ work described above appears in Physical Review Letters and is entitled ​“Experimental observation of an exceptional surface in synthetic dimensions with magnon polaritons.” In addition to the corresponding author Zhang, co-authors include Kun Ding at Imperial College London, and Argonne CNM researchers Xianjing Zhou, Jing Xu and Dafei Jin.

This work was supported by the DOE Office of Basic Energy Sciences and was performed in part at Argonne’s Center for Nanoscale Materials.

Analysis from a team led by Argonne researchers reveals never-before-seen details about a type of thin film being explored for advanced microelectronics.
January 06, 2020 | Chemistry, Crystallography, Materials Science and Engineering 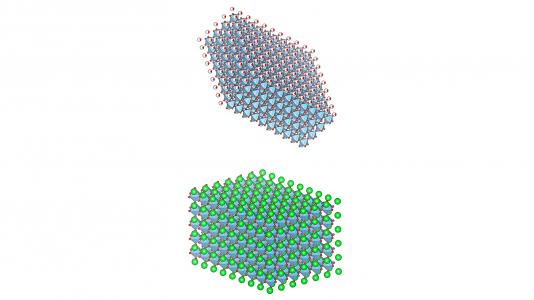