By
John Spizzirri
|
July 19, 2019
Celebrating the 50th anniversary of the Apollo 11 moon landing, Argonne explores its early lunar research as it anticipates studies at the Advanced Photon Source of pristine moon rocks from the final lunar landing missions.

In an epic year for pop culture, 1969, an estimated 400,000 young Americans enjoyed three days of peace and music at the Woodstock Music and Arts Fair in Bethel, New York; PBS and the Pontiac Firebird Trans Am made their debuts; and the struggle for civil rights was taking shape in many forms across the country.

Yet one event may have captured the hearts and imaginations of more Americans, if not much of the world, than any other — the Apollo 11 moon landing of July 20, estimated to have been watched by some 600 million people worldwide. In addition to its primary mission to successfully land astronauts on the moon and return them safely home, Apollo 11’s science objectives included the recovery of the first lunar surface samples.

In a little more than three years, five more Apollo moon landings would follow, each with more sophisticated equipment and broader objectives, but each with the same goal of bringing back more material — moon samples in the form of rock and soil specimens.

Nearly 50 years after the last lunar mission, some of those original materials, which have remained unopened until now, will soon land at the U.S. Department of Energy’s (DOE) Argonne National Laboratory, allowing a select group of researchers an unprecedented look at samples unsullied by Earth’s atmosphere. Unlocking the chemical composition of the samples will provide a clearer understanding of the moon’s origins and determine material resource availability — like water, iron and titanium — for potential habitation on the lunar surface.

The Spectroscopy Consortium Addressing Redox Acquired by Beads (SCARAB) project was among the nine recently selected by the Apollo Next Generation Sample Analysis (ANGSA) Program at NASA to analyze samples of the specially curated materials.

A joint effort between researchers at the Planetary Science Institute (PSI), the University of Chicago (UChicago), the University of Tennessee (UT), and the University of Massachusetts in Amherst (UMass), SCARAB plans to study them using the high-energy X-rays produced at Argonne’s Advanced Photon Source (APS), a DOE Office of Science User Facility.

“The idea is to try to maximize the science return from the Apollo program in preparation for the next suite of missions expected to go there in 2024,” says SCARAB team member Steve Sutton, a UChicago research professor with joint appointments in the Geophysical Sciences Department and the Center for Advanced Radiation Sources, which operates multiple X-ray facilities at the APS.

Considered the most pristine samples ever made available by NASA, these select materials from Apollo missions 15, 16 and 17 have remained hermetically sealed since their collection, either vacuum sealed on the lunar surface, frozen or exposed only to helium and then sealed.

“Leave it to NASA to appreciate that they should store samples unopened because 40–50 years down the line there would be new ways to study them that weren’t available back then,” says Tony Lanzirotti, associate research professor at UChicago’s Center for Advanced Radiation Sources and a project member.

We Have a Go

As it turns out, NASA was right on the mark.

“Leave it to NASA to appreciate that they should store samples unopened because 40-50 years down the line there would be new ways to study them that weren’t available back then.”   — Tony Lanzirotti, associate research professor at UChicago’s Center for Advanced Radiation Sources and SCARAB project member

Facilities like the APS — sources of ultra-bright, high-energy X-ray beams — came online in the mid-1990s, exponentially enabling greater insight into a host of materials, including the lunar samples.

“The improvement in light sources like the APS and our ability to characterize samples like these, has increased tremendously over the last 40 to 50 years,” says Stephen Streiffer, director of the APS and associate laboratory director for Argonne’s Photon Sciences directorate. ​“And they have improved at a much faster rate than computer technology, which we think of as improving at a phenomenal rate.

“That the APS can contribute to something that captures the imagination, like the composition of moon rocks, speaks to the advanced capabilities of facilities like the APS and the breadth of discoveries made by researchers using it.”

Lanzirotti and Sutton have been using the APS to delineate the concentration of elements as well as the oxidation states within previously available lunar soils, expanding understanding of the chemistry and the oxygen content in the environments from which the samples originated.

As members of the collaborative access team (CAT) GeoSoilEnviroCARS (GSECARS) at the APS, they now hope to utilize beamline 13-ID-E to study volcanic glass beads believed to be preserved in the soil samples NASA will provide the SCARAB team in the coming months.

One of the big questions they want to address relates to the volatile composition of the moon when it was forming. The discovery of oxidation state gradients in lunar volcanic beads by collaborators Darby Dyar of PSI and Molly McCanta at UT are driving the study.

“The oxidation state gradients on the beads are telling us what the environment was like when they were formed,” notes Sutton. ​“They were produced by small volcanoes that were spitting out magma which was solidifying in space. But their surfaces were exposed to whatever gases were present and recorded on the beads over three billion years ago.”

The group uses microprobe X-ray fluorescence to help determine the oxidation states of specific elements and their distributions throughout the material. And that chemical snapshot gives a pretty accurate picture of the oxygen content in the ancient lunar magma.

“And knowing what the oxygen content was tells you what minerals might be stable under those conditions,” explains Lanzirotti. ​“So, if there’s a little oxygen, iron will be metal. If there’s a lot, iron will be found in a very oxidized form, as in rust,”

Not only is the information important for understanding the moon’s origins — thought to be the collision of a Mars-sized object with the early Earth — but knowing what mineral resources are available and their characteristics could potentially inform the construction of a station on the moon’s surface.

The idea of a moon base is not new or altogether far-fetched. Argonne’s interest in lunar studies began well before Apollo 11, and includes, more notably, the publication of Argonne Bulletin 6261, ​“A Lunar Power Plant.” Produced by scientists from Argonne’s Reactor Engineering Division, the group drafted plans for a nuclear power plant to support the electrical energy needs of a lunar expedition.

The power plant never made it off the ground, but Argonne’s earliest successful endeavors to understand the chemistry and evolution of Earth’s only satellite appear to have begun in earnest in the mid-1960s.

A collaboration between Argonne, the University of Chicago and NASA’s Jet Propulsion Laboratory produced an alpha scattering instrument for chemical analysis of lunar material, the results aimed at detecting safe landing sites for the Apollo missions. The technique was later used to analyze material brought back on Apollo 11.

From those very first lunar landings, Argonne scientists worked on a variety of lunar research, from the effects of cosmic rays on the moon’s surface to determining mercury contamination levels in potential lunar water resources.

In particular, researchers Stanka Jovanovic and George W. Reed Jr., of Argonne’s early Chemistry Division, were heavily involved in trace element analysis of samples from many of the landings, producing dozens of papers well into the 1980s.

With the advent of X-ray light sources like the APS, the mantle for the study of lunar elements seems to have shifted. Sutton and colleagues from SCARAB have been publishing on the oxidation states of various elements since the early 1990s, often analyzing epoxy-resin-embedded sections of some sample sliced to micron thickness by curation scientists at NASA in the early 1970s.

Now, a batch of pristine samples are within reach.

Streiffer sums up the excitement and significance of studying these samples at the APS and those first steps on the moon, 50 years later.

“This ties back directly to my childhood,” he says. ​“The moon landings are my first memories of the way in which science and technology could break the bounds to which mankind has traditionally been subject.

“It is the seminal event for people of my generation in terms of what it meant to be a scientist. So now it’s amazing to think that I’m sitting here at the APS and we’re actually going to get pristine lunar material and be able to study it.”

The APS is funded by the Scientific User Facilities Division of Basic Energy Sciences in DOE’s Office of Science. The ANGSA program is funded by NASA; The University of Chicago will subcontract through the lead institution, Planetary Science Institute. GSECARS is supported by a grant from NSF-Earth Sciences with additional development grants from NASA-LARS, DOE-Geosciences and NSF-Geophysics.

(Top of page) The far side of the Moon is rough and filled with craters. By comparison, the near side of the Moon, the side we always see, is relatively smooth. Since the Moon is rotation locked to always point the same side toward Earth, humanity has only glimpsed the lunar farside recently — last century. (Image courtesy of NASA.) 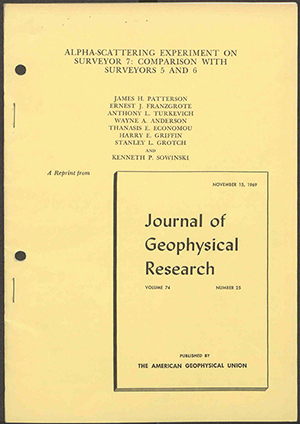 Cover of the 1969 article reprint titled ​“Alpha-Scattering Experiment on Surveyor 7: Comparison with Surveyors 5 and 6″ from the Journal of Geophysical Research, vol. 74, no. 25 (1969). 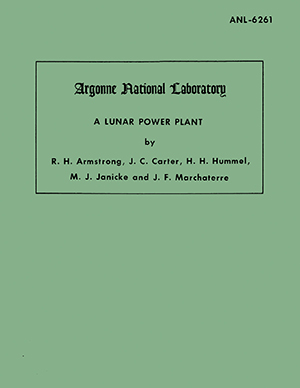 Cover of the 1960 Argonne bulletin documenting ​“A Lunar Power Plant.” 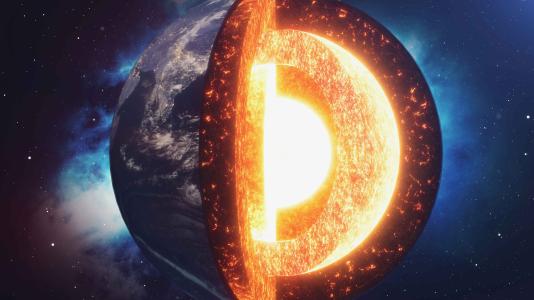 Sliding into place: Study shows how cartilage interacts with the joints in our bodies

Slugging it out: Scientists find material that mimics the intelligence of sea slugs 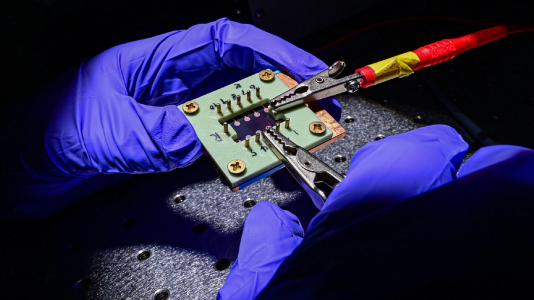