Diversity, inclusion and internships with premier researchers were the topics that attracted about 100 undergraduate students during the the U.S. Department of Energy’s (DOE) Argonne National Laboratory’s First Look@Argonne: A Minorities in STEM Conference.

The students engaged with researchers during panel discussions, question-and-answer sessions and lunch. They also toured Argonne’s facilities, learned how they could pursue their scientific interests at a national lab, met professionals connected to their areas of interest and obtained valuable advice on how to apply and get noticed for the internships.

“The students feel more comfortable in an environment where other people look like them,” said Raelyn Burns, a junior majoring in physics at Jackson State University, who interned last summer at Argonne and returned as a student ambassador to help guide other students.

“Instead of just having a tour, they were able to talk more and learn more, especially while having lunch with a researcher, which gave them the opportunity to ask questions,” she said.

Caleb Xavier Bugg, a third-year graduate student majoring in industrial engineering and operations research at the University of California at Berkeley, was an undergraduate at Morehouse College in 2017 when he met an Argonne researcher during a conference in Denver. He kept in touch with that researcher, which ultimately led to an internship at Argonne this past year. He is now a student ambassador at Argonne and reinforced the value of networking.

Yaresma Zaval Lina, a senior majoring in mathematics at Northeastern Illinois University, wanted to explore careers. By the end of the day she decided to apply for an internship.

“There was just so much information and knowledge here that I didn’t know about before,” said Lina. ​“It was a unique experience.”

Solomon Sodipe, a sophomore majoring in computer science at Prairie State University, plans to apply for an internship.

“I wanted to get out of my comfort zone and advance my career, that’s why I came today,” Sodipe said. ​“I learned so much more than in the classroom and I believe that can help my career.”

Argonne Lab Director Paul Kearns told the students that while he was a Purdue University graduate student, he organized a field trip to Argonne, where he first learned about the national lab’s capabilities. He didn’t realize that one day he would return to help lead the lab.

Argonne hosted 800 students last year, with 600 of them interning over the summer, Kearns said. ​“I am always excited to welcome more,” he added.

Chris Botanga, director of the Center for STEM Education and Research at Chicago State University and Principal Investigator for the Illinois LSAMP program, offered tips on filling out the internship applications.

“You can just see the light bulbs going off with these students because they know what will come next for them,” Botanga said.

Argonne aims to further diversify its workforce and the best way to do that is by encouraging the next generation of scientists and researchers while they are undergraduates, said Meridith Bruozas, manager of Argonne’s Educational Programs and Outreach.

“We hope we gave them an experience today where they see themselves walking the halls of Argonne,” Bruozas said. ​“In the summer, I hope to bump into them around campus and learn about the great STEM experience they are having. Events like ​‘First Look’ provide the inspiration for students to take that first step and fill out the application.”

The First Look@Argonne event was sponsored by the U.S. Department of Energy’s Office of Science, Office of Workforce Development for Teachers and Scientists.

Argonne marks Pride Month with initiatives as it continues to work with LGBTQIA+ employees and community.
June 01, 2021 | Diversity and Inclusion , Gender, Diversity 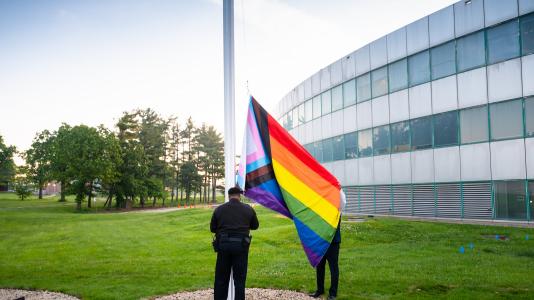