On Noemy Escamilla’s first day as an intern at the U.S. Department of Energy’s (DOE) Argonne National Laboratory, her supervisor, Mike Kaminski, mentioned some outreach work he does through the Lab’s Hispanic/Latino Club. As he described the club’s college scholarship for graduating high school seniors in Joliet Township, Escamilla had a realization.

It was a gratifying moment for Kaminski, an Argonne scientist who helped establish the scholarship as the club’s co-founder.

“The look on my face — I was amazed,” he said. He couldn’t have known that Escamilla, a 2015 scholarship recipient, had gone on to the University of Illinois’ Morrill Engineering Program (MEP), which later referred her to Argonne for the internship.

Escamilla is one of several students who together have received a total of more than $35,000 in education funds through the Argonne Hispanic/Latino Club over the past decade. The club has established four scholarships: one for college undergraduates in engineering, one aimed at graduating high school seniors, and two to help incoming high school freshmen. The club also contributes to the Chicago Hispanic Heritage Organization’s scholarship program.

The Hispanic/Latino Club began at Argonne in 2003 with a mostly social focus. It gathered people together to enjoy authentic food from different regions, or to mark occasions such as Cinco de Mayo.

“We found that there were a lot of non-Hispanics who were really interested in learning about the culture,” Kaminski said. ​“We also wanted the Laboratory to recognize that there is a Hispanic community here, and it’s important.”

Since then, the Argonne Hispanic/Latino Club has become a Lab employee resource group that has more than 70 members, from both Hispanic and non-Hispanic backgrounds. The club still holds regular social events, but the mission has expanded beyond Argonne and out into local communities via the scholarships, food and clothing drives, holiday toy drives, charitable donations and guest speaking at school career fairs.

This year, Kaminski expanded these efforts even further by asking his contacts at MEP, which supports minority engineering students, to recommend summer internship candidates. Escamilla, a college senior who is studying chemical engineering, was one of two students the university recommended.

A Sense of Connection

Escamilla has liked science for as long as she can remember. ​“It’s never been one of those subjects where you dread it, or you know you’re not going to like it,” she said. Her parents encouraged her to pursue a STEM field, and in her senior year of high school, she won the Argonne scholarship, which helped defray costs at the University of Illinois.

In college, she found mentors in MEP Dean Ivan Favila and Victor Cervantes, assistant director of recruitment and retention, who matched her with the Argonne internship opportunity.

“I have this internship I think you’d be really great for,” Cervantes told her, and encouraged her to apply, based on her study track and other qualifications.

For Escamilla, whose parents are both immigrants who weren’t able to go to college, the support from both MEP and Argonne is critical.

The support can come down to small things, like the fact that her mentors call her by her preferred nickname, Mimi. ​“They’re great people,” she said of the MEP staff. ​“They really make an effort to get to know you.”

Cervantes himself was a graduate student at the University of Illinois, and he remembers what a transition it was to come from his native California to the Midwest. For him, involvement in the Society of Hispanic Professional Engineers helped smooth that transition by providing ​“a social network based on professionalism.”

MEP aims to foster a similar sense of connection among its students. ​“Building community is the foundation on which we build everything,” Cervantes said. ​“We want to make sure that our students feel like [the University of Illinois at Urbana-Champaign] is their home.”

A Track from School to Scientist

Kaminski’s own student experience inspired him to give back to the community from his position at Argonne, where he is a principal materials engineer in the Strategic Security Sciences division. His Mexican mother was the only person of color on the block where he grew up in Chicago’s south suburbs, and neither of his parents went to college.

“We were lower middle class,” he said. ​“Going to college was not an option for me unless I had the scholarships to cover it.”

He remembers one of his scholarship awards came as a check directly to him every year, which meant he might have the freedom maybe to buy lunch in addition to paying off bills. Establishing the Argonne scholarships, which are funded by the Hispanic/Latino Club’s fundraising efforts, was one way for him to give back.

“I wish I could find the person who started my scholarship to let them know how much I appreciate it,” he said. ​“I still think about it today.”

Escamilla, who is interested in focusing on water engineering after she graduates in December, is working on a number of projects at Argonne, including one to prevent the fouling of membranes used for wastewater treatment and other liquid separations. She has already extended her appointment at the Lab so she can continue her research while finishing her last semester of school.

Kaminski and MEP are planning more internships and also discussing ways to foster student visits to the Lab. The scholarship money is important, Cervantes said, but so is the opportunity for college students to envision a next step.

“It’s that ​‘see one, be one’ model,” he said of MEP’s students. ​“Having the ability to see someone similar to them who is doing something that they would want to do is amazing.” 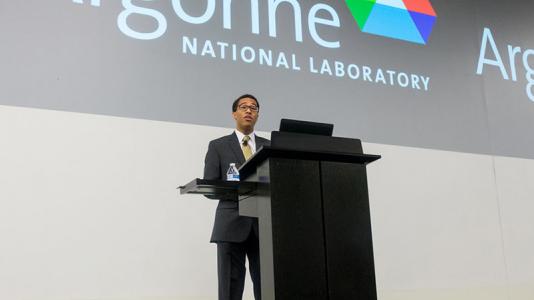 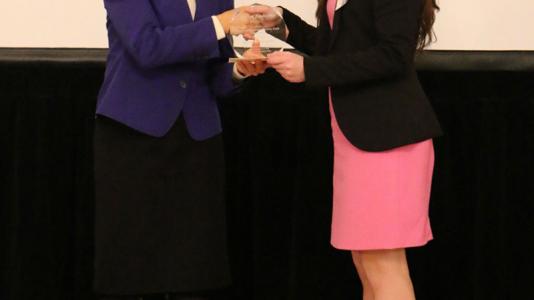