By
Christina Nunez
|
March 28, 2019
Adaptable and easy to use, Argonne’s GTMax and other analytic tools have become an integral part of grid planning.

Every country or region has its own unique electricity system. But no matter where you are in the world, energy decision makers are faced with a similar challenge: how best to plan for current and future energy needs. Scientists at the U.S. Department of Energy’s (DOE) Argonne National Laboratory are developing tools that help governments and grid operators plan for electricity delivery and look for power exchange opportunities within regional markets.

Power system analysis and electricity market modeling tools developed at Argonne are being used in more than 40 countries around the world. One of them, the Generation and Transmission Maximization Model, or GTMax, simulates regional or national electricity systems, helping grid operators to study complex electricity market and operational issues.

“Planning is a regular and recurrent exercise. Once a power system plan is established, the assumptions that plan was based on continuously change. That’s why we focus on building energy planning capabilities in countries around the world by transferring energy planning tools, information and know-how.” — Bruce Hamilton, Global Energy Solutions manager at Argonne National Laboratory

First developed at Argonne in the 1990s, GTMax began as an effort to determine optimal hydropower levels at Arizona’s Glen Canyon Dam, given operating constraints designed to protect the surrounding ecosystems in the Grand Canyon National Park downstream. The model has since been deployed in Africa, Central and Southeast Asia, Southeast Europe and the Black Sea region.

While Argonne’s power system analytics have been used to perform studies for specific markets, their aim is not just to deliver one-off reports to decision makers. Adaptable and easy to use, Argonne’s advanced analytical tools are becoming an integral part of planning on the ground, building capabilities among grid professionals at the local level.

“GTMax is a useful tool that sheds light on economic, reliability and sustainability aspects of possible future energy pathways,” said Tom Veselka, lead developer of GTMax at Argonne. ​“It is also a usable tool that runs on desktop computers with an intuitive graphical user interface and it is widely used to develop a common understanding of transmission and generation technical issues and market conditions.”

Argonne researchers have built on the capabilities of GTMax to create a next-generation power system analysis tool called CHEERS (the Conventional Hydroelectric and Environmental Resource Systems model), a hydropower day-ahead and real-time scheduling program that has the unique ability to simultaneously optimize water, power and environmental performance. CHEERS is a component of the Water Use Optimization Toolset project (WUOT), which is funded and supported by DOE’s Office of Energy Efficiency and Renewable Energy (EERE) Water Power Technologies Office.

Like GTMax, CHEERS was designed from the outset for use in both research and actual grid operations in electricity markets that are constantly evolving.

“Planning is a regular and recurrent exercise. Once a power system plan is established, the assumptions that plan was based on continuously change,” said Bruce Hamilton, manager of the Global Energy Solutions group at Argonne, citing fuel prices, government policies and technology innovation as examples. ​“That’s why we focus on building energy planning capabilities in countries around the world by transferring energy planning tools, information and know-how. These enhanced capabilities can help local governments in charting an economically optimal and sustainable development path, which ultimately contributes to improved quality of life.”

Creating a cloak for grid data in the cloud 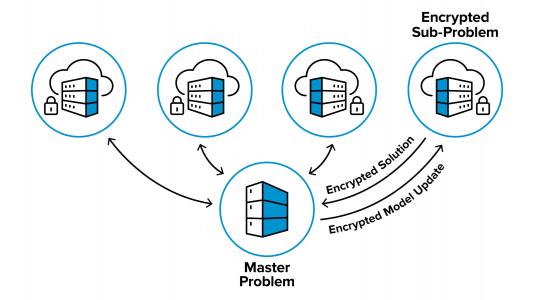