When water turns to ice, whether it’s in your freezer or on a sidewalk on a very cold day, a complicated dance slows down on the molecular scale. Scientists are interested in the energetics of water molecules during these phase transitions.

In one recent study, Argonne postdoctoral researcher Daniel Moberg, in conjunction with colleagues from the University of California San Diego (UCSD), the University of Utah, the Universität Göttingen, and the Max Planck Institutes for Solar System Research and Dynamics and Self-Organization in Göttingen, identified the smallest number of molecules of water that are needed for ice to form. The study, published in the Proceedings of the National Academy of Sciences, received a 2019 Cozzarelli Prize as the journal’s top publication for that year in physical and mathematical sciences.

Using theoretical modeling that was confirmed by complementary spectroscopic experiments in Germany, Moberg and his colleagues saw that it only takes approximately 90 water molecules for ice to form. ​“We mainly thought about it in terms of ice formation in the atmosphere, including how and at what size water can freeze and be stable,” Moberg said. ​“This question has been asked a lot, and many of the answers in terms of the cluster size don’t agree, with experiments and theory not always being paired together or matching up.”

The model that helped them achieve better accuracy with their molecular dynamics simulations is called a ​“many body” potential energy function for water, developed by his UCSD principal investigator, professor Francesco Paesani. ​“The model is very versatile, as it can be used for any form of water,” Moberg said. They also used similar machine-learned methods to model the infrared spectrum of water.

“In our spectra, we could identify an ​‘ice peak’ and a ​‘liquid peak,’ indicating more water molecules in the clusters were in the ice phase or liquid phase, respectively, and these synced up very well with what our colleagues observed experimentally,” Moberg said. The experimental side of the study required new advances developed by the team in Göttingen in cooling the water clusters slowly enough to prevent a less ordered form of ice, known as amorphous ice, from forming.

According to Moberg, these small ice clusters that form can eventually make up the seeds that create larger ice clusters. This ​“pure ice” can create a platform for new chemical reactions to happen, because it gives other molecules a solid surface to attach to and initiate reactions.

The researchers also identified a mixed-phase region between 90 and 150 water molecules in which the water undergoes an oscillation between liquid water and ice states. ​“There may be a similar oscillation mechanism in nanoconfined water or other substances as well at these small cluster sizes,” Moberg said.

Moberg moved from UCSD to Argonne in June 2019, and since then has been conducting research in gas-phase chemistry. Although his current research is not directly related, Moberg believes that there is the potential to connect his work on atmospheric water with questions in combustion and gas-phase dynamics.

Argonne-developed high-resolution models predict the effect of climate change on the extratropical storms that bear down on the Northeast in the winter.
October 20, 2021 | Computational Science, High Performance Computing, Modeling and Simulation 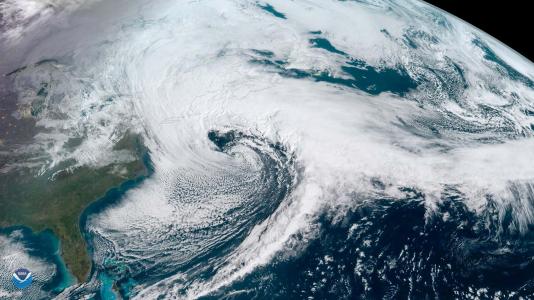