By
Mary Fitzpatrick
|
May 10, 2021
Like detectives, Argonne scientists are studying clues from the release of carbon in thawing permafrost regions, piecing the clues together to create detailed maps to predict the impact of rising global temperatures on future greenhouse gas emissions.

Webster’s Dictionary defines a vicious cycle as ​“a reciprocal cause and effect in which two or more elements intensify and aggravate each other, worsening the situation.”

The release of carbon from thawing soils in permafrost regions represents just such a cycle.

“Overall, this new picture of how the vast amounts of organic carbon stored in permafrost-affected soils are distributed across much of the world’s coldest land areas will help to improve the ability of Earth system models to predict the impact of rising global temperatures on future emissions of greenhouse gases from these rapidly changing regions.” — Julie Jastrow, terrestrial ecologist

Permafrost-affected soils — where subsurface temperatures remain below freezing for two or more consecutive years — contain vast amounts of organic carbon that decompose and enter the atmosphere. The rate of such release has accelerated with climate change as the regions rapidly grow warmer and surface soils thaw to greater depths in summer. The release of stored carbon as greenhouse gases (e.g., carbon dioxide and methane) into the atmosphere causes further warming and more carbon emissions.

To help understand the cycle, scientists need to carefully examine the potential for these carbon stocks to speed global warming rates by measuring how much of the greenhouse gases are emitted from decomposing permafrost carbon. A team of researchers led by Julie Jastrow and Roser Matamala, terrestrial ecologists at the U.S. Department of Energy’s (DOE) Argonne National Laboratory, is contributing to that effort through an integrated set of research approaches.

Their work, recently published in Science Advances, focused on quantifying how much carbon is stored in permafrost-affected soils and, more specifically, where it is stored in the soil layers.

Because soils hold more than two-thirds of the Earth’s terrestrial carbon pool — more than twice the amount of carbon present in the atmosphere — they play a significant role in the global carbon cycle. Much of the carbon in soils is organic matter formed as dead plant materials decompose and microbial debris accumulates over periods ranging from decades to thousands of years.

The team employed big data — a huge volume of data that grows with time — and geospatial analysis methods to develop the first high-resolution maps of soil carbon storage and distribution at multiple depths for permafrost regions in the Northern hemisphere.

Like detectives, geospatial analysts gather and pick through a mountain of data that are sorted geographically, finding the most relevant data and using visualization and statistical techniques to identify and analyze trends. The team also identified which environmental conditions — such as temperature, precipitation, topography or vegetation — best predict soil carbon quantities in permafrost regions.

Their detective work provides a baseline that is critical to scientists who develop the Earth system models used to predict the amount and type of greenhouse gas emissions released as permafrost-affected soils begin to thaw.

In the rarified air present at high latitudes and altitudes, where most permafrost-affected soils occur, climate extremes lead to greater temperature increases than in other parts of the world. Permafrost is already warming, thawing and disappearing from some portions of these cold regions, but the progressive rate of permafrost loss predicted by future climate warming scenarios could release substantial additional greenhouse gases to the atmosphere before and beyond the end of this century.

Measurements of soil organic carbon used to produce earlier circumpolar estimates were combined with large amounts of new soil data contributed by scientists from Canada, Russia, South Korea and Sweden. The data were organized by depth — 0 to 1, 1 to 2, and 2 to 3 meters — to calculate profiles of soil organic carbon stocks at each sampled location. These collaborative efforts increased sample numbers by 42 percent — to 69 percent — compared with previous studies, depending on depth.

The team then compiled newly available high-resolution maps of environmental factors that influence soil formation and scaled them to a uniform resolution of 250 square meters. Correlating these relationships with the environmental maps, they generated estimates of soil organic stocks for both the northern circumpolar and Tibetan permafrost regions.

One important finding suggests that more carbon occurs closer to the surface — within a meter — than scientists previously believed, making more of the region’s carbon vulnerable to thawing, decomposition and release as global air temperatures rise, potentially feeding the warming cycle.

The researchers found that the distribution of carbon stocks in both permafrost regions depends on complex relationships among multiple environmental factors. Temperature, precipitation, topographic properties and vegetation type were significant predictors of carbon stocks. The analysis also pinpointed topography as a major factor in prediction uncertainties; this information can be used to prioritize where additional samples of soil carbon profiles are most needed.

​“Overall, this new picture of how the vast amounts of organic carbon stored in permafrost-affected soils are distributed across much of the world’s coldest land areas will help to improve the ability of Earth system models to predict the impact of rising global temperatures on future emissions of greenhouse gases from these rapidly changing regions,” said Jastrow.

This work was supported by the U.S. Department of Energy Office of Science. 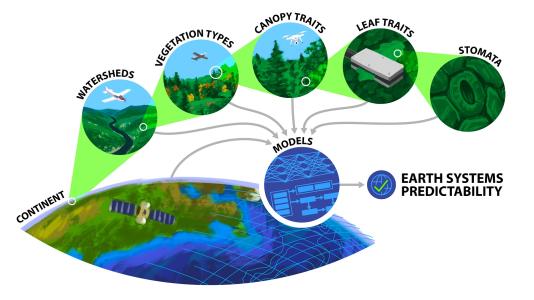 The Geospatial Energy Mapper is an interactive online mapping tool that can help identify areas across the country that are suitable for wind, solar, and other clean energy infrastructure projects.
January 10, 2023 | Power Systems, Grid Modernization, Renewable Energy 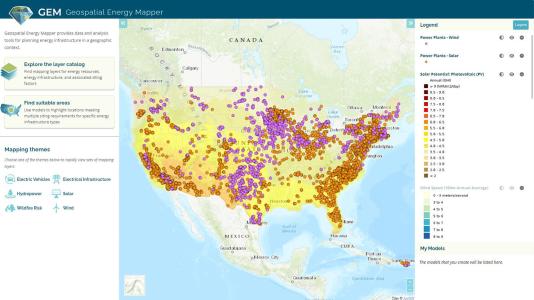