By
Dave Bukey
|
June 30, 2020
Researchers at Argonne will share advances in offshore drilling safety and technology in the Eastern Mediterranean with a new five-year grant from the U.S.-Israel Energy Center.

The U.S. Department of Energy’s (DOE) Argonne National Laboratory is part of a U.S.-Israeli research and industry partnership that was awarded $10.1 million over five years by the U.S.-Israel Energy Center to improve the safety, efficiency and sustainability of offshore natural gas production.

Tulane University and Hebrew University will direct the project, which will apply lessons learned from safety initiatives in the Gulf of Mexico to the Eastern Mediterranean. Researchers on the project will also help develop and deploy energy technologies.

The project, known as GoMed, is one of three U.S.-Israel Energy Center programs announced recently to enhance energy security in the Eastern Mediterranean region. The group will create new technologies and methods to:

Argonne’s role is to strengthen the safety of offshore natural gas operations with innovative methods to analyze risk, assess safety and manage processes.

“Argonne pioneered use of a safety evaluation technique called Success Path Analysis for offshore oil and gas operations,” said Bruce Hamilton, who will lead Argonne’s role and is also manager of the Global Energy Solutions group in the lab’s Energy Systems division. ​“This approach leverages over 50 years of expertise in promoting nuclear industry safety but was adapted by Argonne to other industries.”

Argonne engineers developed and tested this approach as part of a seven-year agreement between the U.S. Bureau of Safety and Environmental Enforcement (BSEE) and DOE that included a range of technical assistance projects.

The GoMed program’s goal, said Hamilton, is to:

“We aim to create one-of-a-kind technologies that will allow industry to explore offshore natural gas reservoirs in a safe and sustainable manner, and develop new technologies for natural gas upgrading. We are thrilled to have Argonne participating with us in this very exciting effort,” said Tulane University’s Daniel Shantz, a lead principal investigator for the project.

A second U.S.-Israel Energy Center program will focus on developing water technology and includes Argonne’s Seth Darling, director of the laboratory’s Center for Molecular Engineering, and Aaron Packman, who directs Northwestern’s Center for Water Research and has a joint appointment at Argonne. A third U.S.-Israel Energy Center program will address energy storage challenges. The U.S. Energy Center is managed by the Binational Industrial Research and Development Foundation.

Argonne to advance energy security and safety with funds from U.S.-Israel Energy Center

Utility player: How hydropower can help get more wind and solar on the grid

A white paper from the International Energy Agency details how hydropower can help ease the global addition of wind and solar to the resource mix on power grids. Argonne’s Audun Botterud offered his expertise as a co-author.
February 17, 2020 | Hydrology, Aquatic Science, Hydropower 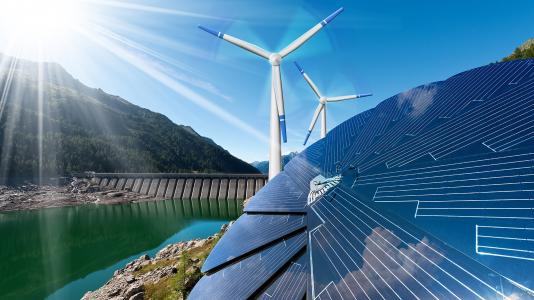