By
CARLA REITER
|
May 26, 2016
Friction is the enemy of efficiency, and since the days of the Egyptian pharaohs, people have sought ways to get rid of it.

The ancient Egyptians used animal fat and olive oil to lubricate the rollers that moved stones and statues for their colossal monuments. Anirudha Sumant, a nanoscientist at the U.S. Department of Energy’s (DOE’s) Argonne National Laboratory, and his collaborators are using graphene, a one-atom-thick sheet of carbon arrayed in a honeycomb-like lattice, coupled with nanodiamonds.

Although it sounds expensive, the graphene-nanodiamond lubricant is cheaper than existing products and a good deal more effective than olive oil. Using miniscule diamonds wrapped in graphene, the group can reduce friction to almost zero. They call the effect superlubricity, and it is a very enticing prospect for industries making everything from computer hard drives to wind turbines.

Industries spend tens of billions of dollars annually on lubricants to mitigate friction effects. The market for new graphene-based lubricants will be a significant niche of that larger market and is projected to reach over $2 billion by 2025.

On May 22, the new lubrication technology received a TechConnect National Innovation Award at TechConnect’s annual World Innovation Conference and Expo, a gathering that allows inventors to present their work to potential funders and commercial partners. The TechConnect Innovation Awards select the top 15% early-stage innovations submitted from around the world through an industry-review process. 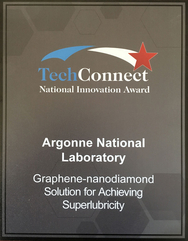 “The prize recognizes technology that has shown a state-of-the-art innovation that will have a positive impact on consumers and the environment,” said Mostafa Beik, a business development executive in Argonne’s Technology Development and Commercialization Division (TDC). Beik and fellow business development executive CJ Guron are working closely with Sumant and his team to develop the commercial possibilities for this technology.

“The story started almost five years back with an informal discussion with my colleague Ali Erdemir from Argonne’s Energy Systems Division,” Sumant said.

Sumant and Erdemir started their initial investigations on graphene with funding they earned through Argonne’s Laboratory Directed Research and Development program. The early results stunned them.

In order to get further insight into the mechanism of superlubricity, Sumant approached in-house theory expert Subramanian Sankaranarayanan from the theory group at Argonne’s Center for Nanoscale Materials (CNM), a DOE Office of Science User Facility. The team marched forward and published a series of seminal papers, including one that was recently published in Science.

“This is really a team effort, and I am lucky to have such a great team, including postdoctoral fellow Diana Berman, who did the experimental work, and Sanket Deshmukh, who did the theory work,” Sumant said.

Friction is produced when two surfaces rub against each other, generating heat and causing a loss of material and dissipation of energy. Industries spend tens of billions of dollars annually on lubricants to mitigate friction effects. The market for new graphene-based lubricants will be a significant niche of that larger market and is projected to reach over $2 billion by 2025, according to Beik.

The process that reduces friction to zero involves coating one of the surfaces with an amorphous form of carbon. The other surface is sprinkled with a mixture of graphene  and nanodiamonds.

“When the two surfaces slide against each other, the graphene makes a kind of blanket around the nanodiamond, and these nanodiamonds encapsulated in graphene act as nanoscale ball bearings between the two contact surfaces” Sumant said.  ​“If you do it in an atmosphere like dry nitrogen or dry argon gas, you can reduce the friction down to almost zero: superlubricity.”

The mixture is extremely long-lasting. Two surfaces can slide almost four kilometers on a single drop before the drop needs replenishing. And the process is inexpensive. Most lubricant coatings in current use must be deposited in a vacuum, requiring costly apparatus and limiting the process to parts that fit into it.

“Our coating is a solution,” Sumant said, ​“so you just spray it in the air. There is no question about the size of the part, the geometry of the part. That’s a huge advantage.”

The nanodiamond process requires a dry environment, with humidity below 30%. But the group has also developed a graphene-only spray for situations in which dryness is impossible. It doesn’t achieve superlubricity, but it reduces friction between two sliding steel surfaces by six times and wear by ten thousand times.

“Compared with any other solid lubricant out there right now in the market, this is the best possible solution, since it works in dry and humid air equally well,” Sumant said.

Sumant envisions using the graphene-nanodiamond lubricant in some specialized applications, such as rotating seals or wind turbines where maintaining dry atmosphere could be possible. The same concept could be extended to other systems, such as turbines used for power generators.

There are other intriguing applications of both the nanodiamond and graphene-only technologies. Computer hard disks are lubricated between the disk itself and the magnetic head that sits a few nanometers above it. The atomically thin graphene will not only prevent the disc from corrosion-induced damage, it will also allow the read/write head to fly at nanometer level above the surface, helping increase the storage density of the disk, Sumant said.

Eventually, the team envisions designing a variety of solid lubricants based on graphene and other 2-D materials that could be used in different environments for specific applications.

“We want to develop a lubricant genome database where one can pick the appropriate lubricant for their application,” Sumant said.

Sumant and his collaborators are already working with several companies to develop the superlubricant for industrial use.

“We are working collaboratively so the technology will be available for adoption by others,” Beik said.

Graphene has only been around for a decade, and the nanodiamond-graphene technology is still in its infancy, but it is growing fast.

“There is a tremendous potential market opportunity for this technology,” Beik said. ​“This is exciting.”