By
John Spizzirri
|
December 19, 2018
Researchers from Argonne’s Environmental Science division participated in one of the largest collaborative atmospheric measurement campaigns in Antarctica in recent decades.

On May 13, 1887, the journal Science published a brief history of Antarctic exploration in which it outlined scientific achievements thus far and expressed a hope that new exploration would soon be undertaken. The article makes apparent that, by the late 19th century, scientists already understood the importance of the region’s geography on meteorology and the regulation of ocean currents.

While the hope for further exploration of Antarctica has come to fruition, such exploration has come in fits and starts, due in part to the huge investment in time and money required to transport, install and maintain delicate instrumentation and a small host of scientists. The primary reason, perhaps, is what atmospheric research engineer Maria Cadeddu delicately refers to as the region’s ​“prohibitive conditions.”

In 2015, Cadeddu and colleagues from the U.S. Department of Energy’s (DOE) Argonne National Laboratory participated in a collaborative atmospheric measurement campaign to understand the impact of regional and large-scale events on Antarctic warming. The team was comprised of a number of academic institutions and national laboratories, including Argonne, Los Alamos and Brookhaven. The research focused on the micro- and macro-physical properties of Antarctic clouds, like the average size of droplets or the total amount of liquid or ice contained in a cloud. The goal was to determine the amount of radiation the clouds will transmit based on such parameters.

Based at McMurdo Station and on the West Antarctic Ice Sheet (WAIS), the campaign was part of the DOE Atmospheric Radiation Measurement (ARM) West Antarctic Radiation Experiment (AWARE), led by Principal Investigator Dan Lubin from the Scripps Institution of Oceanography. The one-year study deployed the largest assemblage of instrumentation for ground-based Antarctic atmospheric measurements since 1957, and details from that study are emerging in a number of scientific journals, including Nature Communications and the Journal of Geophysical Research: Atmospheres.

“The whole idea was to try to figure out how atmospheric dynamics, like air masses that come from the sea, for example, can affect cloud properties and how changes in cloud properties affect the energy balance of the region,” said Cadeddu, who works in Argonne’s Environmental Science division. ​“And understanding how clouds affect a system can help with future climate projections.”

Antarctica is an important region for climate models, she noted, but models rely on data, the more accurate the better. To date, Antarctic climate models have been less than accurate because science lacks quantitative observations of the region; the observations that are available come from satellites, which have issues in very high and low latitudes. But given the time and the instrumentation provided by AWARE, researchers have begun to fill in many missing pieces in Antarctica’s overall climate puzzle.

At home, where temperatures are less frigid, Cadeddu is part of the Argonne cloud and radiation research team that includes Virendra Ghate, a radar meteorologist, and Donna Holdridge, the ARM mentor for the radio-sounding systems. The cloud and radiation research team contributed their expertise in remote-sensing equipment, including LiDAR (light detection and ranging) and radar devices, short-wave spectrometers and microwave radiometers for measuring radiation, and radiosondes (balloon-elevated apparatuses that measure upper atmospheric conditions).

Because remote sensors transmit raw data, researchers must process and interpret the information to obtain direct measurements or physical quantities. For example, signals sent from LiDAR and radar devices return as scattered signals that correlate to cloud-altering mechanisms like radiation.

“These sensors use knowledge of how radiation propagates through a medium, as well as how cloud and rain drops interact with radiation. When we examine these signals, we can estimate specific cloud properties, such as particle sizes or the amount of vapor, liquid water or ice they contain,” explained Cadeddu.

Cloud phases are relevant to radiative property, or how much radiation the clouds transmit, absorb or scatter. Argonne researchers used this information, in part, to understand differences between cloud conditions in the Arctic and Antarctic and their effect on regional climate.

Among the major differences, Antarctica exhibits much less anthropogenic pollution than the Arctic. While this offers more pristine conditions for studying clouds, the lower pollution levels also affect the amount of liquid water present in clouds at very low temperatures.

Models convert all the liquid to ice when clouds reach temperatures near -20 oC. But the team found that the liquid layer persists in temperatures as low as -35 oC in the clouds above McMurdo. Even small amounts of liquid can have a warming effect on the surface of the Arctic, so the team is trying to determine what climate-related effects these liquid-saturated clouds might have in the south.

The AWARE campaign made headlines in 2016, when scientists conducting measurements along the West Antarctic Ice Sheet Divide captured one of the largest surface melt events on record. Traditionally, surface melt events at the ice sheet are attributed to warm ocean water beneath coastal ice shelves, but extensive observations showed external factors at work, as well. Scientists attribute some of the melting to a strong El Niño event combined with regional conditions, some of which related back to liquid-bearing clouds.

“Clouds exert an important influence on the balance of incoming and outgoing energy at the surface, and these low-level optically thin clouds can have a determinant role in either causing or prolonging melting conditions over ice sheets,” said Cadeddu.

Cloud characteristics may not have been part of the larger consideration of ​“meteorological phenomena of the southern hemisphere” when the Science article appeared in 1887. Whatever the factors, the author made clear that 19th century science was looking at a larger, more forward-thinking picture that left room for the potential role of clouds when they wrote the following:

“ … The important bearing of these problems on practical questions cannot be overrated. The seaman cannot dispense with the knowledge of the currents, winds, and magnetic elements, and there is hardly a class of people who will not be benefited by the progress of meteorology.” 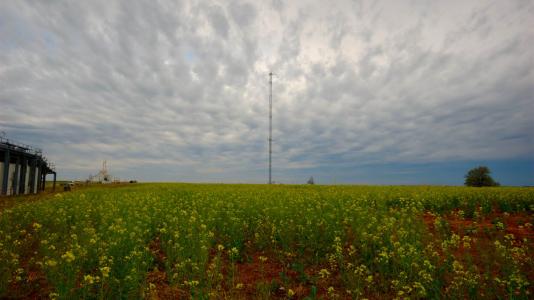 Clouds with a chance of warming