The Great Lakes have a profound impact on the country’s identity, economy and its climate. But the long-term influence of the Great Lakes on regional weather patterns, especially under a changing climate, has not been well understood. That’s because most climate models don’t realistically consider how the temperature or movement of six quadrillion gallons of lake water interact with the atmosphere.

A project called Coastal Observations, Mechanisms, and Predictions Across Systems and Scales (COMPASS), funded by the Office of Biological and Environmental Research in the U.S. Department of Energy’s (DOE) Office of Science, is working to address this knowledge gap. In a new study, a team of collaborators including Jiali Wang of DOE’ s Argonne National Laboratory used high resolution regional model experiments to explore how lake surface temperatures may affect the climate of the Great Lakes region. The team found that a small difference in lake surface temperatures — just 1.4 °C of warming — can have a big impact on summer climate, including:

“Much of the work we do at Argonne National Laboratory involves making the country more resilient to the impacts of climate change,” said Wang, ​“but we can’t talk about becoming resilient until we truly understand the risks.”  — Jiali Wang

This warming is equivalent to the potential warming of the lake water surface temperatures predicted to occur by mid-century. Rising lake surface temperatures have the potential to destabilize regional climate conditions throughout the Great Lakes basin. This could increase extreme weather events, causing larger storms and flooding in an area that is home to 30 million people. With so many lives and so much infrastructure in the potential path of storms, accurate predictions are essential. That’s where Wang and her team come in.

“Much of the work we do at Argonne involves making the country more resilient to the impacts of climate change,” said Wang, ​“but we can’t talk about becoming resilient until we truly understand the risks.”

Scientific speed and accuracy are crucial to climate resilience

Climate scientists need highly accurate climate models that will allow them to make projections for the long-term — the next 20 to 30 years.

To inform the global climate model development on their more accurate representation of the Great Lakes, Wang’s new study used more precise measurements of the lakes’ surface water temperature to design numerical experiments. Instead of looking at regional climate from a global perspective, their study uses local and regional simulation output to ​“zoom in” on the Great Lakes region. Rather than seeing a resolution down to an area of a few hundred miles, the models can look even closer — down to an area of about two miles.

Another breakthrough of the COMPASS project will come from its two-way coupled, atmospheric and 3D hydrodynamic model with atmosphere-lake feedbacks. Here’s why this is a game-changer in climate modeling:

These improvements are key to a highly accurate climate model, but they amount to an extremely large number of data points that need to be processed. This is where another essential tool comes in: the supercomputer.

Wang credits her team’s success to their strong collaboration and their use of the Argonne Leadership Computing Facility (ALCF) and the National Energy Research Scientific Computing Center (NERSC), which are home to some of the world’s fastest and most powerful supercomputers. ​“These simulations would not be possible without supercomputers,” Wang said. ​“The calculations would have taken people years to complete on a laptop. However, with the supercomputing facilities at Argonne and NERSC we can scale up our science and test big, complex data sets very quickly.” The ALCF and NERSC are DOE Office of Science user facilities.

Thanks to these computing facilities, the team is now running improved climate models to understand how climate change will impact water levels in the Great Lakes.

Wang stressed that when it comes to climate resilience, speed of discovery is key. ​“We can’t wait. We need reliable data right now to prepare to meet tomorrow’s challenges.”

A paper based on the study was published in The Journal of Geophysical Research: Atmospheres, on May 17, 2022. In addition to Wang, other authors include Pengfei Xue, Argonne; Michigan Technological University, Houghton; William Pringle, Argonne, and Zhao Yang and Yun Qian, PNNL, Richland, Washington.

The research was funded by the U.S. Department of Energy’s Office of Science, Office of Biological and Environmental Research.

The Great Lakes by the Numbers: 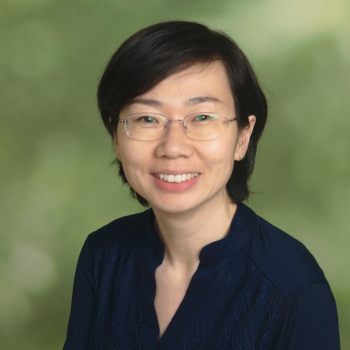 I like quiet time. I like to read psychology books to better understand and communicate with my child, my husband, and with younger students and researchers. It’s helped me see that different personality types can be a gift.

I also enjoy nature and hiking. This spring, my family went to the Smoky Mountains and every day we got to hike. Sometimes we need some rest to be able to generate new ideas.