By
Savannah Mitchem
|
September 17, 2018
When it comes to designing and optimizing mechanical systems, scientists understand the physical laws surrounding them well enough to create computer models that can predict their properties and behavior.

However, scientists who are working to design better electrochemical systems, such as batteries or supercapacitors, don’t yet have a comprehensive model of the driving forces that govern complex electrochemical behavior.

After eight years of research on the behavior of these materials and their properties, scientists from the U.S. Department of Energy’s (DOE) Argonne National Laboratory, DOE’s National Renewable Energy Laboratory and the University of Colorado-Boulder have developed a conceptual model that combines existing theories to form a more general theory of electrochemistry that predicts previously unexplained behavior.

The new model, called the Unified Electrochemical Band-Diagram Framework (UEB), merges basic electrochemical theory with theories used in different contexts, such as the study of photoelectrochemistry and semiconductor physics, to describe phenomena that occur in any electrode.

The research began with the study of alpha manganese oxide, a material that can rapidly charge and discharge, making it ideal for certain batteries. The scientists wanted to understand the mechanism behind the material’s unique properties so that they could improve upon it.

“There wasn’t a satisfying answer to how the material was working,” said Argonne scientist Matthias Young, ​“but after doing a lot of calculations on the system, we discovered that by combining theories, we could make sense of the mechanism.”

Extensive testing of several other materials has helped the scientists develop the model and demonstrate its usefulness in predicting exceptional phenomena.

“The model describes how properties of a material and its environment interact with each other and lead to transformations and degradation,” said Young. ​“It helps us predict what will happen to a material in a specific environment. Will it fall apart? Will it store charge?”

Computational models using UEB not only enable scientists to predict material behavior, but can also inform which changes to the material could improve its performance.

“There are models out there that make correct predictions, but they don’t give you the tools to make the material better,” said Young. ​“This model gives you the conceptual handles you can turn to figure out what to change to improve performance of the material.”

Because the model is general and fundamental, it has the potential to aid scientists in the development of any electrode, including those used for batteries, catalysis, supercapacitors and even desalination.

“We are gaining something that is more than the sum of its parts,” said Young. ​“We have taken a lot of brilliant work by many different people, and we unified it into something that yields information that was not there before.”

A review of the research titled ​“The Unified Electrochemical Band Diagram Framework: Understanding the Driving Forces of Materials Electrochemistry” was published on August 21 in Advanced Functional Materials.

The research was funded by the DOE Office of Energy Efficiency and Renewable Energy, Fuel Cell Technologies Office; the National Research Council; the Research Corporation for Scientific Advancement; the National Science Foundation; and National Institute of Standards and Technology and the Joint Center for Energy Storage Research (JCESR), a DOE Energy Innovation Hub.

The continuing quest to find a better battery 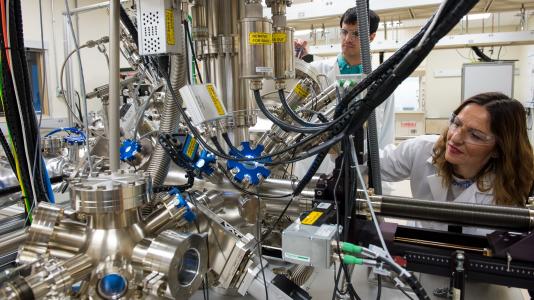