Electricity storage in batteries is in ever increasing demand for smartphones, laptops, cars and the power grid. Solid-state batteries are among the most promising next-generation technologies because they offer a higher level of safety and potentially longer life.

JCESR’s Linda Nazar, a leading professor at the University of Waterloo, and Zhizhen Zhang, her postdoctoral research associate, published their research on enhancing the mobility of Li-ions in solid-state batteries using the paddlewheel effect, which is the coordinated motion of atoms, in a paper entitled: ​“Targeting Superionic Conductivity at Room Temperature by Turning on Anion Rotation in Fast Ion Conductors” on June 3 in Matter, a monthly journal of materials science. JCESR is an Energy Innovation Hub led by the U.S. Department of Energy’s (DOE) Argonne National Laboratory. The University of Waterloo is one of JCESR’s 18 partners.

Solid-state batteries, using solid electrolytes in place of the usual liquid organic electrolytes, have emerged as a promising replacements for today’s Li-ion batteries, according to Nazar.

“They offer the potential of safer and longer-lasting batteries that can deliver higher energy density important to a wide variety of electrochemical energy storage applications, such as vehicles, robots, drones and more,” said Nazar. ​“As the most important component in solid-state batteries, the solid electrolyte determines its safety and cycle stability to a large extent.”

An unwanted chemical reaction, called the thermal runaway reaction, has led to fires and explosions involving today’s Li-ion batteries which continue to burn until they run out of fuel. Because of these hazards, JCESR seeks to eliminate the internal liquid organic electrolyte by replacing it with a solid.

“In fact, it turns out that the anion ​‘building blocks’ that comprise the solid framework are not rigid, but undergo rotational motion,” said Nazar.  ​“Our study addresses this principle to show that anion dynamics in the framework of the solid enhance Li+ cation transport.  The anion dynamics can be ​‘turned on’ even at room temperature by tuning the framework, and the anion dynamics are strongly coupled to cation diffusion by the paddlewheel effect. This is somewhat akin to the transport of people through a multi-person revolving door.”

While new solid electrolytes are still in the developmental stage, the advances are encouraging. A breakthrough would be a game changer and dramatically increase the safety and deployment of Li-ion batteries, according to JCESR Director George Crabtree.

“If you can find a solid-state electrolyte enabling fast Li+ cation motion, it would be a drop-in replacement for liquid organic electrolytes and immediately rid batteries of the thermal runaway reaction, the major cause of fire in today’s Li-ion batteries.” said Crabtree. ​“For its safety advantages alone, there would be a huge market for it in cell phones, laptops, video recorders, autos and the electricity grid.”

The intellectual enthusiasm for solid-state batteries is shared across JCESR. Other collaborators at University of Michigan and MIT also are exploring solid electrolytes and the paddlewheel effect.  Solid-state batteries are one of the most promising and sought-after advances for industry, said Crabtree.

“JCESR wants to understand the atomic and molecular level origins of battery behavior.  With this knowledge, we can build the battery from the bottom up, atom-by-atom and molecule-by-molecule, where every atom and molecule play a prescribed role in producing the targeted battery behavior,” Crabtree said.  ​“The paddlewheel effect is an example of that. This paper is at the very frontier of solid electrolyte behavior, and we want to transfer this knowledge to the commercial sector.”

JCESR is supported by DOE’s Office of Science.

The University of Waterloo has spawned thousands of commercial and social enterprises, is home to the world’s largest co-operative education program and boasts a uniquely entrepreneurial culture that encourages experimentation and risk-taking.  The result is an outstanding learning and research experience for more than 36,000 undergraduate and graduate students in Waterloo, Ontario, Canada — the anchor of Canada’s innovation corridor. 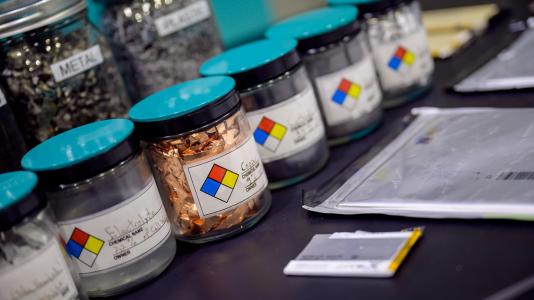