By
Andre Salles
|
March 24, 2022
Kathy Harkay was there at the start of the APS, working to determine the limits of what the machine could do. Now she’s working on upgrading the facility, and is looking forward to test-driving the new APS.

Particle accelerators are powerful engines, built to speed up tiny particles of matter until they are nearly at the speed of light. An accelerator complex, such as the Advanced Photon Source (APS), a U.S. Department of Energy (DOE) Office of Science user facility at DOE’s Argonne National Laboratory, is large enough to fit a major league baseball stadium inside its main ring. It generates X-ray beams a billion times brighter than those used in a typical dentist’s office.

They’re impressive machines, and Kathy Harkay’s specialty is pushing them to the edge, to see what they can do.

“The upgrade is the next level of thrill. I am lucky to be involved in the commissioning of two major machines. It’s a wonderful thing.”  — Kathy Harkay, Argonne National Laboratory

Harkay is an accelerator physicist, who has been at Argonne for nearly 30 years. She laughs about her longevity with the laboratory. ​“When I joined, I saw all these people who had been here for 30 years, and now here I am,” she said.

But she knows there aren’t a lot of places where she can work on an accelerator like the one at the heart of the APS. And now, with a massive upgrade in the works that will increase the brightness of the APS X-ray beams by up to 500 times, Harkay will get the rare chance to help commission both the original APS and its sequel.

“The work is so exciting, very rewarding,” she said. ​“I’m grateful to have the opportunity to work on my passion and be paid for it.”

Initially, Harkay wasn’t sold on the idea of working on particle accelerators, but after some prodding from her mentor, Purdue professor Laszlo Gutay, she entered into a doctoral program supported by DOE’s Fermi National Accelerator Laboratory. She earned her Ph.D. in physics from Purdue University in 1993, and it wasn’t long before she realized she’d found her career.

“Accelerator physics turned out to be the perfect field,” she said. ​“I’m hands on. I like to be in front of the accelerator and doing the experiment. It’s a great combination of theory and applied science. Argonne was looking for someone, and I jumped in.”

Her first project at Argonne wasn’t at the APS, however. For her first two years, Harkay worked on a proposal for a different type of accelerator — a spallation neutron source — which eventually wound up at DOE’s Oak Ridge National Laboratory. By the time she arrived at the APS in 1995, the machine had been built and was in its commissioning phase.

“We were learning how to operate the machine, how to design experiments on it,” Harkay said. ​“Graduate school teaches you physics, but it doesn’t teach you how to do a job. I had the good fortune of having mentors to show me the ropes. It was the early days, and we were still changing and improving the accelerator.”

Eventually, Harkay said, the APS moved to a ​“steady state.” The team knew how it worked and what it could do, and it has kept on doing that, becoming one of the most productive X-ray light sources in the world. But Harkay cannot hide the thrill in her voice when she talks about the APS Upgrade, particularly the chance to take a brand new accelerator for a spin.

“The upgrade is the next level of thrill,” she said. ​“I am lucky to be involved in the commissioning of two major machines. It’s a wonderful thing.”

Before the upgraded APS can be commissioned, it needs to be built. Harkay has been involved in the design of key parts of the new accelerator. Her first project for the APS Upgrade was to improve the existing system that injects electrons into the main storage ring. The original APS works on a top-up principle, adding new electrons into the ring to replenish ones lost at each bend in the track. But the upgraded APS will swap out entire groups of electrons, called bunches, from the beam at once, replacing particles with freshly accelerated bunches.

This required a new approach to the injector systems, with an added challenge. Harkay and her team had to improve the existing components without building entirely new ones. This means that the changes to the system had to be made while the APS was operational — or, more specifically, during the scheduled one-month maintenance periods that occur three times a year.

“We needed a solution that was the least disruptive and the most effective within the constraints of what is practical,” she said. ​“That’s what kept me up at night. What is the optimal set of upgrades to get to the goal? Which ones will have the impact we want within those constraints?”

Harkay led a team for three years, developing a plan to update the injector systems and eventually carrying it out, completing the updates in the summer of 2021. The systems are currently being commissioned. Harkay is proud of the work her team has done. She noted that the process included everything she loves about accelerator physics: making predictions, designing solutions and testing them out.

Now Harkay leads a different team updating the radiation safety systems for the upgraded APS. There’s a time limit on this work as well — the APS is currently scheduled to shut down in April 2023 for a year, so the upgraded accelerator can be installed. Harkay’s team includes people from safety groups across the laboratory. They are checking calculations on radiation shielding in many of the new APS’s systems. It’s important work, she says, and good progress is being made.

For Harkay — whose accelerator operations group will work on the smaller accelerators in the APS complex while the storage ring is being upgraded — the real charge will come from finding out just what the new APS is capable of. She knows that her work has helped to make important discoveries possible over the past three decades and will help to enable the next generation of breakthroughs at the fully upgraded APS.

“I feel like this is a tool that makes a difference in people’s lives,” she said. ​“I get to work on things that matter to the everyday person, and I’m so thankful for it.” 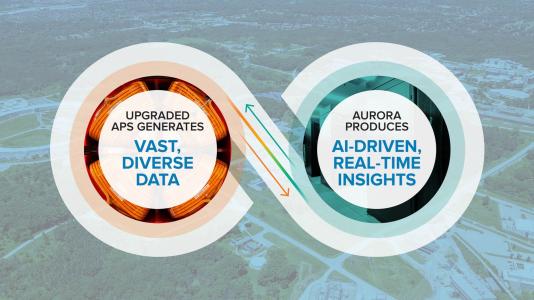