By
Andre Salles
|
April 14, 2021
Exploring and manipulating the behavior of polar vortices in material may lead to new technology for faster data transfer and storage. Researchers used the Advanced Photon Source at Argonne and the Linac Coherent Light Source at SLAC to learn more.

Our high-speed, high-bandwidth world constantly requires new ways to process and store information. Semiconductors and magnetic materials have made up the bulk of data storage devices for decades. In recent years, however, researchers and engineers have turned to ferroelectric materials, a type of crystal that can be manipulated with electricity.

In 2016, the study of ferroelectrics got more interesting with the discovery of polar vortices — essentially spiral-shaped groupings of atoms — within the structure of the material. Now a team of researchers led by the U.S. Department of Energy’s (DOE) Argonne National Laboratory has uncovered new insights into the behavior of these vortices, insights that may be the first step toward using them for fast, versatile data processing and storage.

“You don’t want something that does what a transistor does, because we have transistors already. So you look for new phenomena. What aspects can they bring? We look for objects with faster speed. This is what inspires people. How can we do something different?” — John Freeland, senior physicist, Argonne National Laboratory

What is so important about the behavior of groups of atoms in these materials? For one thing, these polar vortices are intriguing new discoveries, even when they are just sitting still. For another, this new research, published as a cover story in Nature, reveals how they move. This new type of spiral-patterned atomic motion can be coaxed into occurring, and can be manipulated. That’s good news for this material’s potential use in future data processing and storage devices.

“Although the motion of individual atoms alone may not be too exciting, these motions join together to create something new — an example of what scientists refer to as emergent phenomena — which may host capabilities we could not imagine before,” said Haidan Wen, a physicist in Argonne’s X-ray Science Division (XSD).

These vortices are indeed small — about five or six nanometers wide, thousands of times smaller than the width of a human hair, or about twice as wide as a single strand of DNA. Their dynamics, however, cannot be seen in a typical laboratory environment. They need to be excited into action by applying an ultrafast electric field.

All of which makes them difficult to observe and to characterize. Wen and his colleague, John Freeland, a senior physicist in Argonne’s XSD, have spent years studying these vortices, first with the ultrabright X-rays of the Advanced Photon Source (APS) at Argonne, and most recently with the free-electron laser capabilities of the LINAC Coherent Light Source (LCLS) at DOE’s SLAC National Accelerator Laboratory. Both the APS and LCLS are DOE Office of Science User Facilities.

Using the APS, researchers were able to use lasers to create a new state of matter and obtain a comprehensive picture of its structure using X-ray diffraction. In 2019, the team, led jointly by Argonne and The Pennsylvania State University, reported their findings in a Nature Materials cover story, most notably that the vortices can be manipulated with light pulses. Data was taken at several APS beamlines: 7-ID-C, 11-ID-D, 33-BM and 33-ID-C.

“Although this new state of matter, a so called supercrystal, does not exist naturally, it can be created by illuminating carefully engineered thin layers of two distinct materials using light,” said Venkatraman Gopalan, professor of materials science and engineering and physics at Penn State.

“A lot of work went into measuring the motion of a tiny object,” Freeland said. ​“The question was, how do we see these phenomena with X-rays? We could see that there was something interesting with the system, something we might be able to characterize with ultrafast timescale probes.”

The APS was able to take snapshots of these vortices at nanosecond time scales — a hundred million times faster than it takes to blink your eyes — but the research team discovered this was not fast enough.

“We knew something exciting must be happening that we couldn’t detect,” Wen said. ​“The APS experiments helped us pinpoint where we want to measure, at faster time scales that we were not able to access at the APS. But LCLS, our sister facility at SLAC, provides the exact tools needed to solve this puzzle.”

With their prior research in hand, Wen and Freeland joined colleagues from SLAC and DOE’s Lawrence Berkeley National Laboratory (Berkeley Lab) — Gopalan and Long-Qing Chen of Pennsylvania State University; Jirka Hlinka, head of the Department of Dielectrics at the Institute of Physics of the Czech Academy of Sciences; Paul Evans of the University of Wisconsin, Madison; and their teams — to design a new experiment that would be able to tell them how these atoms behave, and whether that behavior could be controlled. Using what they learned at APS, the team — including the lead authors of the new paper, Qian Li and Vladimir Stoica, both post-doctoral researchers at the APS at the time of this work — pursued further investigations at the LCLS at SLAC.

“LCLS uses X-ray beams to take snapshots of what atoms are doing at timescales not accessible to conventional X-ray apparatus,” said Aaron Lindenberg, associate professor of materials science and engineering and photon sciences at Stanford University and SLAC. ​“X-ray scattering can map out structures, but it takes a machine like LCLS to see where the atoms are and to track how they are dynamically moving at unimaginably fast speeds.”

Using a new ferroelectric material designed by Ramamoorthy Ramesh and Lane Martin at Berkeley Lab, the team was able to excite a group of atoms into swirling motion by an electric field at terahertz frequencies, the frequency that’s roughly 1,000 times faster than the processor in your cell phone. They were able to then capture images of those spins at femtosecond timescales. A femtosecond is a quadrillionth of a second — it’s such a short period of time that light can only travel about the length of a small bacteria before it’s over.

With this level of precision, the research team saw a new type of motion they had not seen before.

“Despite theorists having been interested in this type of motion, the exact dynamical properties of polar vortices remained nebulous until the completion of this experiment,” Hlinka said. ​“The experimental findings helped theorists to refine the model, providing a microscopic insight in the experimental observations. It was a real adventure to reveal this sort of concerted atomic dance.”

This discovery opens up a new set of questions that will take further experiments to answer, and planned upgrades of both the APS and LCLS light sources will help push this research further. LCLS-II, now under construction, will increase its X-ray pulses from 120 to 1 million per second, enabling scientists to look at the dynamics of materials with unprecedented accuracy.

And the APS Upgrade, which will replace the current electron storage ring with a state-of-the-art model that will increase the brightness of the coherent X-rays up to 500 times, will enable researchers to image small objects like these vortices with nanometer resolution.

Researchers can already see the possible applications of this knowledge. The fact that these materials can be tuned by applying small changes opens up a wide range of possibilities, Lindenberg said.

“From a fundamental perspective we are seeing a new type of matter,” he said. ​“From a technological perspective of information storage, we want to take advantage of what is happening at these frequencies for high-speed, high-bandwidth storage technology. I am excited about controlling the properties of this material, and this experiment shows possible ways of doing this in a dynamical sense, faster than we thought possible.”

Wen and Freeland agreed, noting that these materials may have applications that no one has thought of yet.

“You don’t want something that does what a transistor does, because we have transistors already,” Freeland said. ​“So you look for new phenomena. What aspects can they bring? We look for objects with faster speed. This is what inspires people. How can we do something different?” 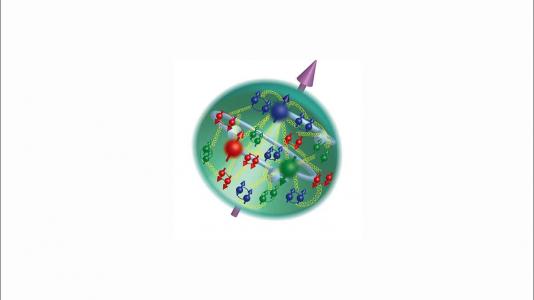 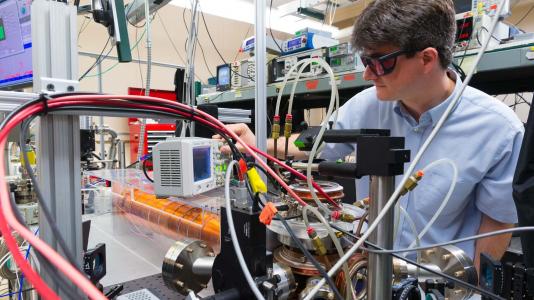