Fuel injector nozzles might be tiny fixtures but make no mistake, they have a huge impact on how engines run.

Their task is to convert fuel into miniscule droplets as it mixes with air and ignites, a process involving complex spray dynamics scientists are still trying to understand today.

Even small changes in fuel injection can alter engine performance and fuel efficiency. But if manufacturers could anticipate fuel injection behavior, they could more accurately predict what goes on inside the engine.

Researchers at the U.S. Department of Energy’s (DOE) Argonne National Laboratory are focused on building the predictive tools manufacturers need to build engines of the future more quickly and at a lower cost to consumers.

Under a new Cooperative Research and Development Agreement (CRADA), the three organizations, along with DOE’s Sandia National Laboratories, will work together to build more accurate fuel spray models and integrate them into full engine simulations. This effort will build on the fuel spray and combustion modeling work the three organizations have done over the past six years, which Cummins has adopted in its own internal workflow.

“Understanding fuel injection is essential for understanding combustion, which in turn drives engine efficiency and emissions,” said John Deur, director of combustion research at Cummins. ​“Building on our previous CRADA with Argonne and Convergent Science, as well as our ongoing membership in the DOE’s Spray Combustion Consortium led by Sandia National Laboratories, we anticipate this new CRADA will further our knowledge of how fuel injection affects the combustion process, which we can then apply in developing cleaner, more efficient engines.”

Addressing the weak link between injector and fuel spray models

Traditional modeling approaches don’t accurately represent the formation of a fuel spray as it emerges from the nozzle of an injector. But what happens in this region determines how the fuel is distributed further downstream.

In their renewed partnership, Argonne and its collaborators will develop a way to more accurately represent the near-nozzle region by dynamically coupling models that detail internal flow and spray formation, and linking the model to full engine simulations.

Their advanced approach builds on existing methods for modeling fuel sprays, but will require fewer assumptions about how fuel jets form and could therefore yield a more predictive engine modeling tool.

Such a tool would enable manufacturers like Cummins to better understand how fuel and hardware choices impact engine performance and emissions. For engine makers focused on decarbonizing transportation using alternative fuels, this tool can help them make informed decisions on fuel choice and its impacts on injector and engine performance.

Uncovering the relationship between the flow conditions inside the injector and the breakup of the spray is critical to the success of the research team’s approach. To connect the dots, the team will use machine learning, a type of artificial intelligence that uses patterns within data to predict outcomes.

With machine learning tools and existing knowledge of the underlying physics, researchers hope to generate a model that can predict what the spray would look like under a given set of flow conditions.

“Using data from high-fidelity spray simulations and X-ray experiments as our benchmark, we can quantify the errors in the dynamic coupling approach,” said Argonne research scientist Gina Magnotti. ​“If we can learn this discrepancy over a wide range of flow conditions, then we will be able to recover the true solution and build a predictive spray model.”

To support the development of their modeling approach, the team will rely on both high-fidelity simulations as well as X-ray experiments done on fuel injector components. Experiments will be done at the Advanced Photon Source (APS), a DOE Office of Science User Facility located at Argonne.

The APS generates bright X-ray beams researchers use to look deep within materials. The Argonne experimental team will use the facility’s tools to characterize the internal geometry of injectors, fuel flow and spraying characteristics near the nozzle — features most diagnostic tools can’t capture.

Laser diagnostics at Sandia will complement resources at Argonne. These tools will be used to quantify global spray characteristics, like liquid and vapor penetration, as well as combustion and emission parameters.

Experimental data from both sources will ultimately serve to add more knowledge to the injector and fuel spray models Magnotti’s team is developing and validate their dynamic coupling approach. Once proven, Convergent Science, which developed CONVERGE CFD, a widely used platform for engine modeling, can implement the technology into their code, where Cummins and other engine manufacturers can leverage it.

“As a supplier to engine manufacturers around the world, we are constantly investing in improving both the speed and accuracy of our CONVERGE CFD software,” says Kelly Senecal, co-founder of Convergent Science. ​“The enhanced modeling capability developed in this CRADA will give industry the tools it needs to design cleaner and more efficient engines.”

This CRADA is funded by the Vehicle Technologies Office under DOE’s Office of Energy Efficiency and Renewable Energy, and by Cummins and Convergent Science, Inc.

Researchers at Argonne have developed a virtual cooperative fuel research engine that will help probe how a fuel’s chemical kinetics translates into its octane rating.
December 18, 2018 | Computational Science, Modeling and Simulation, Mechanical Engineering 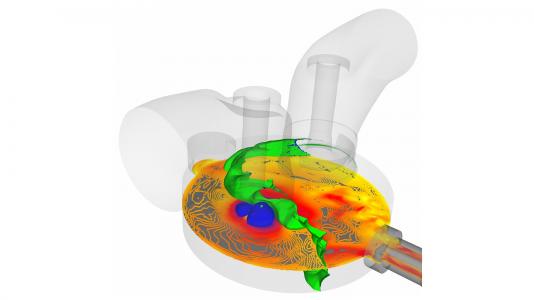