September 13, 2013
Science Behind the Fiction critiques the science portrayed in popular films and literature.

“Theatricality and deception are powerful agents to the uninitiated,” says the villain Bane, Batman’s rather eloquent enemy in The Dark Night Rises. But ironically, Bane’s most terrifying threat—a fusion reactor crafted by a captive scientist into a ​“four-megaton nuclear bomb”—is itself a deception. It wouldn’t work.

Argonne physicist Keith Bradley knows a few things about fusion and bombs: He’s worked both as a weapons designer and in fusion research at Lawrence Livermore National Laboratory. (He also knows a bit about Hollywood: he was born there.)

There are two ways to get enormous energy out of atomic nuclei. One is by splitting heavy atoms apart: a process called fission. That’s what today’s nuclear reactors do. But light nuclei also give off energy when you combine them. This is fusion, and we haven’t mastered it. 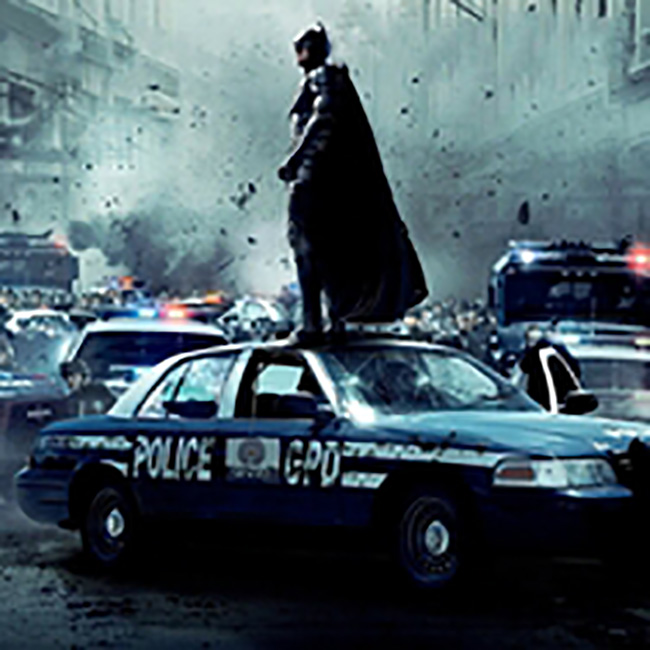 Controlled fusion would be a huge breakthrough, if we could figure out how to produce more energy than we put into the reaction. It’s cleaner than fission and doesn’t require fossil fuels.

That’s why it’s a big deal when Bruce Wayne’s company builds a working fusion reactor in the movie. When Bane gets ahold of the reactor, however, he orders a captured scientist to recraft it into a nuclear weapon.

But an additional attractive thing about fusion energy is that it’s really, really hard to make into a weapon.

“It’s impossible to reconfigure even today’s fission reactors into atomic bombs,” Bradley said. ​“But it’s even more ridiculous to think that one could convert a fusion reactor into a bomb.”

It takes a tremendous amount of energy to combine atoms, even the light hydrogen atoms in fusion research. ​“If you turn off a fusion reactor and walk away, it will just quickly run out of fuel and stop,” Bradley said.

“Think of it like this,” Bradley said. ​“Say you put two matches down on a table next to each other. They’re not going to spontaneously burst into flame, right? That’s like fusion. The matches will just sit there. You have to put an enormous amount of energy into the equation first—that is, you have to strike one of the matches.”

Even though Batman’s reactor-turned-bomb is never detonated, Bane explains that the reactor is ​“decaying” and will go off by itself in five months because it’s so unstable.

As we’ve already learned, fusion reactions are inherently stable. The fuel itself can’t melt down, because it’s in gas form. More importantly, it can’t be reconfigured into an unstable situation.

“Decaying would make a fusion reactor harder to ignite, not easier,” Bradley said. ​“As the tritium fuel sits around, it decays into helium, which is even more difficult to ignite.”

Oh yeah, and the size of the reactor is a bit of a problem, too.

“Though we have yet to actually produce a fusion reactor here on Earth—our Sun is a fusion reactor—when we eventually do, it will be huge,” Bradley said. ​“The most prominent attempt at a fusion reactor in the U.S., the National Ignition Facility, uses lasers which are more than two football fields long. That’s because it takes more than 500 trillion watts to ignite the tiny pellet of fusion gas.”

So much for Bruce Wayne’s reactor, which is carted around in trucks during the movie.

“It is practically impossible to imagine a fusion reactor that size,” Bradley said. ​“It needs way too much energy to get it started.”

Today, Bradley is working in fission research—ways to make current reactors safer, cheaper and more efficient. He manages programs in advanced modeling and simulation for the U.S. Department of Energy’s Office of Nuclear Energy.

“It makes for a great story,” Bradley said of the weaponized reactor, ​“but it does mislead the moviegoer. There are real risks and benefits to this type of technology, but not these. It’s too bad it isn’t more accurate.”