By
Tona Kunz
|
December 26, 2018
Argonne scientists and engineers see their work with interns in the tribology group as an investment. Some of the interns will go on to get Ph.D.s, some will return to Argonne for careers — all of them offer fresh perspectives.

During Sheera Lum’s first week interning at the U.S. Department of Energy’s (DOE’s) Argonne National Laboratory, she wasn’t sure if it would be the right fit. She has interned in industry before but never at a national laboratory, and the terminology in the tribology department was as mystifying as a foreign language.

But by the third week, Lum was sold.

“I definitely want to do research. I hope to pursue a Ph.D. in materials science,” said the mechanical engineering senior from Mississippi State.

Lum was part of the Science Undergraduate Laboratory Internship (SULI) program sponsored by DOE’s Office of Science. During her industry internship the previous summer, she had learned to design hydraulic pumps. At Argonne, she learned how to tie that type of work to her passion for sustainability and optimize biodegradable lubricants to reduce wear and tear on the components of a hydraulic pump.

“This is a great opportunity to do some hands-on experiments rather than just sitting in front of a computer doing modeling,” Lum said.

The interns spend their days preparing samples for testing in grinder-type environments that simulate years of wear on bearings and lubricants. They use microscopes to look for microscopic cracks and the lab’s X-ray machine, the Advanced Photon Source, a DOE Office of Science User Facility, to look for internal defects on the nanoscale.

The field of tribology started in the 1960s and focuses on ways to make materials more energy efficient by reducing friction and wear through design and lubrication, including creating biodegradable lubricants and coatings that are free of harmful additives. Tribology is used in everything from heavy machinery, to contact lens coatings, to next-generation lasers.

Argonne scientists and engineers work with interns as a way of exposing them to what it would be like to work in a national laboratory and in fields they may never have thought about. It takes time for the scientists to train the students, but Maria De La Cinta Lorenzo Martin, a materials scientist who oversees several of the tribology interns, said she views it as an investment. About 25 percent of the interns in the tribology group will decide to go on to get Ph.D.s, and some to return to start careers at Argonne.

Even those who decide to go into industry or other fields pay dividends in the form of fresh perspectives and questions that stir creativity in the Argonne team. Plus, once the students learn about tribology, they take that knowledge with them, allowing them to incorporate it into new applications, such as biologists creating bio tribology for longer-lasting medical implants.

“Exposing students to a variety of career options, scientific disciplines and the diversity of Argonne’s workforce are some of the goals of the SULI program,” said Meridith Bruozas, manager of Educational Programs at Argonne.

Sam Kizlaitis, another SULI intern, spent his previous summers drilling holes at a construction job, but with his transfer from Moraine Valley Community College to the University of Illinois at Urbana-Champaign for chemical engineering, he thought he ought to try to figure out what working in the chemical engineering field would be like. An internship in Argonne’s tribology laboratory has him coating samples with various lubricants and testing them to determine how the physical properties of those coatings and samples change under stress. The goal is to find coatings that reduce wear and extend the life of gears, such as those used in vehicles and wind turbines.

“This internship provides much more insight about my future career,” said Kizlaitis, a junior. ​“I am able to use stuff that I learned in school in the real world rather than just doing math problems. I’m having fun. I can’t criticize (Argonne) one bit.”

The SULI program encourages undergraduate students to pursue science, technology, engineering and mathematics careers by providing research experiences at the DOE laboratories and facilities. Selected students participate as interns appointed at one of 17 participating DOE laboratories and facilities. They perform research, under the guidance of laboratory staff scientists or engineers, on projects supporting the DOE mission. The SULI program is sponsored and managed by DOE’s Office of Science.

Researchers at Argonne have found a way to use tiny diamonds and graphene to give friction the slip, creating a new material combination that demonstrates the rare phenomenon of ​“superlubroisity”.
May 26, 2015 | Computer Science and Engineering, Computational Science, Modeling and Simulation 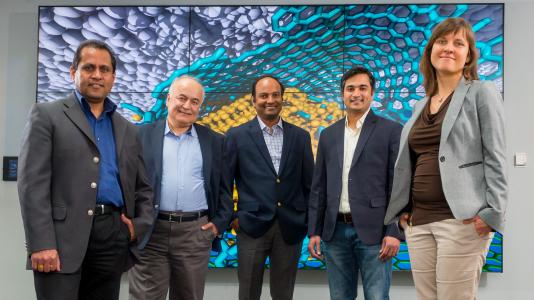