April 6, 2020
Industry, as well as agencies like the U.S. Department of Energy, are gaining insight into the sensitivities and challenges of automation and finding inspiration for new research and development.

Automated driving features, from adaptive cruise control to fully self-driving functionality, can make driving safer and more convenient when compared to manual methods. However, the associated actuators, sensors, and processing units all represent additional electrical loads. Automotive engineers and manufacturers must balance the value of vehicle enhancements against that higher energy draw.

Researchers at the U.S. Department of Energy’s (DOE) Argonne National Laboratory are analyzing how additional electrical loads impact a vehicle’s overall range and fuel/energy consumption. Their findings can help industry as well as agencies like DOE better understand the sensitivities and challenges of automation and inspire new research and development. 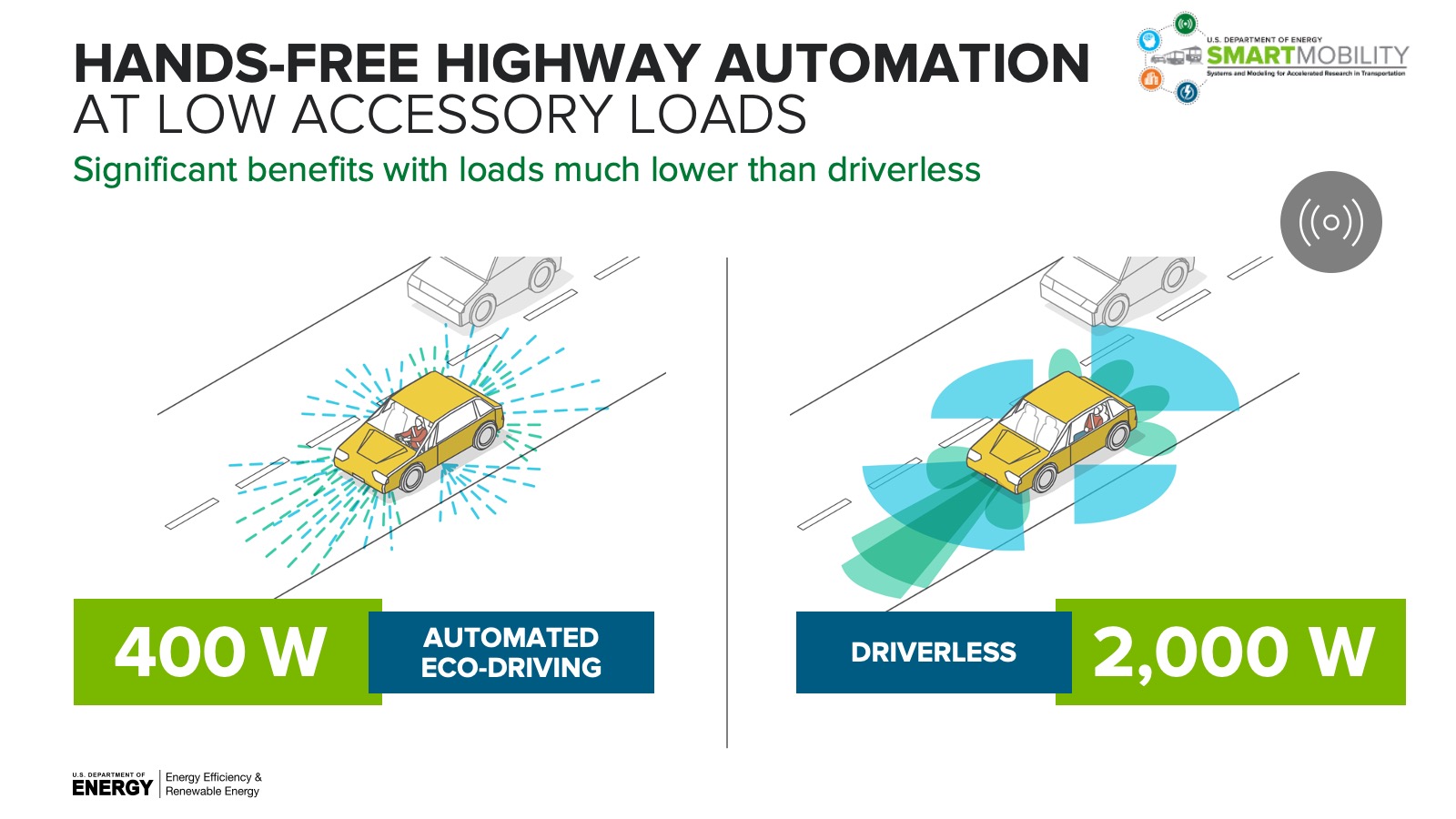 The electricity required by automation constitutes a relatively new piece of a vehicle’s overall energy use. Not sufficiently accounting for the demand of new features puts automakers at risk of dramatically underestimating fuel consumption (particularly in self-driving vehicles) and overestimating range (especially important for battery electric vehicles). Inversely, smaller-than-expected electrical loads can result in exaggerated automation impacts, leading to the over design of other systems such as an electric vehicle’s required battery capacity.

DOE research has indicated there is potential for some higher electrical loads to essentially negate some energy savings of automation-enabled, eco-conscious driving. But understanding and achieving trade-offs is a complex challenge, given that loads vary significantly based on a vehicle’s level of automation and the types of sensors enabling it.

“Automation does not equal a fixed amount of additional load,” said Eric Rask, a principal research engineer at Argonne. ​“The picture is much more subtle, based on the type of functionality you are bringing and how that translates to sensing needs and electrical loads for processing.”

Snapshot across different levels of automation

The team began by isolating the sensors and processing units used on the vehicles, to clarify the exact data and power flows required for operation. They then instrumented different nodes to better understand where automation system power was being used. This included adding current sensors and voltage sensors on components like the alternator, the battery, the braking and steering system, the cameras, radar, and the processing units.

“We put sensors on the key components of each automation system as we were interested in knowing where energy was going,” Rask said.

From there, the research team analyzed and tracked power flows during real-world vehicle operation, and put that data into context leveraging their decades of experience doing infield and laboratory experiments on hundreds of vehicles. Contextualizing the data enabled them to gain a system-level appreciation of the automation-related electrical loads, relative to all other loads within the vehicle during typical operation.

The team’s findings confirmed and provided more context around several hypotheses. First, the study confirmed that electrical loads from automation (particularly higher levels of automation) can have a significant impact on overall vehicle energy or fuel consumption. Moreover, the energy consumption sensitivity related to the additional loads is highly dependent on the vehicle’s propulsion type as well as how it drives.

Second, researchers observed much lower loads for the production vehicle versus the prototype automated vehicle, highlighting that certain automation features can be enabled with relatively low electrical draw. This underscores the importance of understanding the specific functionality and system being developed when investigating electrical load impacts on efficiency. It also points to the need for ongoing research and development, Rask said.

“I expect future work to be multidisciplinary, and focused on trying to quantify, lower, and optimize the loads associated with these systems, at various levels of automation and capability, in order to build and improve upon the current state of the art,” he said.

This work is supported by the U.S. Department of Energy (DOE) Vehicle Technologies Office (VTO) under the Systems and Modeling for Accelerated Research in Transportation (SMART) Mobility Laboratory Consortium, an initiative of the Energy Efficient Mobility Systems (EEMS) Program.