Electrolytes are the lifeblood of any battery, carrying charge back and forth between the battery’s cathode and anode. In all commercial batteries, from cars to hand held devices, electrolytes are liquid in form.

These types of batteries, mainly lithium-ion, have many advantages — they are lightweight, have high energy density and a long lifespan — however, the liquid electrolytes used within them are potentially flammable.

To overcome this drawback, and improve the safety and energy density of future batteries, automakers from Volkswagen to Toyota, are exploring ways to create solid-state batteries for next-generation technologies.

Argonne battery research targets all aspects of battery development, from the discovery of new materials, to testing of battery cells, and the scale up of devices with commercial potential. Among its research efforts is the study of novel ceramic and polymer materials that can overcome barriers to the development of solid-state batteries and ​“beyond-lithium-ion” technologies.

Opportunity and challenges of solid-state batteries

The search for better solid materials with which to replace existing liquids has a long history. Consider lithium metal batteries, which incorporate lithium metal in place of the common graphite anode. Researchers have explored the potential of lithium metal technology for decades due to its potential for greater energy density.

“The concept of using solid parts, particularly lithium metal, has been known since the 1970s,” says Venkat Srinivasan, director of the Argonne Collaborative Center for Energy Storage Science (ACCESS). ​“Since then, theory has emerged that shows, on paper, you can double the energy density of a battery by replacing graphite with lithium metal.”

Unfortunately, lithium metal technology development has been stymied by the formation of dendrites, which are needle- or whisker-like structures that grow and protrude inside liquid electrolytes when lithium metal is used as the anode. Dendrite formation, primarily affecting lithium metal batteries during recharge, can short-circuit a battery and severely hinder its performance.

“Seeing this problem, researchers thought that by using a hard solid as an electrolyte, as opposed to a liquid, we could stop dendrites from forming,” Srinivasan said. ​“However, testing revealed that using a hard solid lowered conductivity, so for many years, researchers did not see the use of solids as very practical or useful.”

According to Srinivasan, that changed about five years ago, when researchers in Japan discovered a hard solid electrolyte with the same conductivity as the liquid electrolytes in use at the time.

“While there were many problems with the material itself, by demonstrating that conductivity and mechanical strength can both be high, this discovery totally changed the paradigm,” said Srinivasan. ​“It showed the battery community that yes, it’s possible to have both high conductivity and high strength in a solid material.”

This discovery, among others, has renewed excitement around creating solid-state batteries, mobilizing institutions like Argonne to investigate further and deliver insights and research support to battery manufacturers and other industry stakeholders.

To further accelerate discovery, the laboratory continues to invest in experts and new research infrastructure. Material discovery and characterization are aided by Office of Science User Facilities like the Advanced Photon Source, a high-energy X-ray light source, and the Electrochemical Discovery Laboratory at JCESR, which boasts equipment for synthesizing and characterizing materials for beyond-lithium-ion technologies. Argonne’s robust capabilities in advanced modeling and simulation further support material synthesis by enabling detailed analysis of atomic behavior and molecular interactions.

“With support from facilities like the Argonne Leadership Computing Facility, which has high performance computing resources, we can model processes and materials from the nanoscale to the mesoscale, to find out what kinds of properties we need from these materials to avoid things like dendrites,” Srinivasan said.

Along with synthesizing and characterizing materials, Argonne also tests them at the lab’s Cell Analysis, Modeling and Prototyping (CAMP) Facility, the nation’s first and top-tier battery cell fabrication facility. Here, new battery materials are made into electrodes and small cells or, if warranted, larger pouch cells.

The CAMP facility has tripled in size and will soon expand its capabilities further to support research in solid-state lithium battery systems, among other things. The expanded CAMP facility will house a multi-functional coater to test and develop new electrode-separator designs needed for solid-state lithium battery systems. This long-sought-after technology will enable research into higher-energy-density materials that can increase battery life and reduce the risk of fires from overheating.

The most promising new materials validated at CAMP end up in Argonne’s Materials Engineering Research Facility, where experts develop cost-efficient manufacturing processes to commercially scale materials and transfer the scale-up processes to industry for production.

“At Argonne, we use the latest and greatest technology to not just discover new materials but also scaling them and achieve the properties that companies can use to commercialize. We’ve been doing this work for lithium-ion batteries and are now looking to do it with solid-state batteries,” said Srinivasan.

Ongoing partnerships with industry and academic institutions through ACCESS and JCESR, combined with a multidisciplinary team of experts, all contribute to Argonne’s rich ecosystem of synthesis, testing and scaling capabilities.

“A solid state battery may be the holy grain to battery innovation, but there are still many barriers to realizing its potential,” Srinivasan. ​“Argonne offers the right tools and expertise to over cover many of these challenges and bring this technology to fruition.” 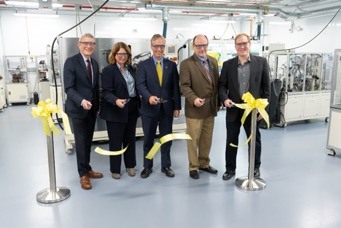 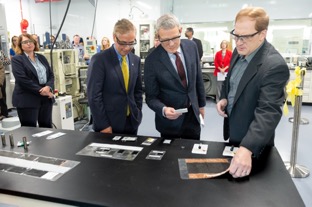 US Department of Energy’s Vehicle Transportation Office Director Michael Berube and Argonne National Laboratory Director Paul Kearns get shown by CAMP manager and group leader Andrew Jansen the different types of prototype battery electrodes and cells that are made and validated at the battery R&D CAMP Facility at Argonne.