In their quest to develop more efficient engines, engineers have lost their spark. Modern gasoline-powered engines are smaller, but generate more power and fewer emissions than ever before. To accomplish this feat, engineers use turbochargers to boost the pressure inside an engine until spark-based ignition systems sputter.

The problem affects engines of all types - from car and truck engines to large stationary engines running on natural gas to generate electricity.

To solve the problem, researchers at Argonne National Laboratory are evaluating and developing advanced ignition systems that, unlike traditional spark ignition systems, tolerate and even thrive in the challenging operating conditions of modern engines.

Researchers of advanced ignition systems have discovered innovative ways to improve upon the conventional spark plug, including systems that use lasers, transient plasma, and ​“corona” ignition (think lasers on the top of a rook in chess).

Argonne’s multi-disciplinary teams of engineers, computer scientists and physicists are making ground-breaking discoveries in this field. Argonne’s discoveries stem from its unique strengths in both fundamental science and applied research and development. Longman and his colleagues across the laboratory not only discover which new technologies outperform spark plugs under challenging engine conditions, but why they do so.

Argonne’s insights arise as scientists from different fields approach ignition from all angles. ​“We cover the whole ignition realm,” said Thomas Wallner, section manager in Vehicle Systems and Interoperability at Argonne. Wallner, Longman and their peers experiment on many engine platforms, apply this new data to models that simulate ignition, and also investigate how ignition unfolds in real time with ultra-bright, high-energy x-rays generated by Argonne’s Advanced Photon Source.

Lightening takes ignition by storm
One reason that advanced ignition systems tend to outperform spark ignition is because lasers, transient plasmas or the crown-like corona arrangement can trigger the ignition process potentially anywhere in the engine’s combustion chamber. ​“It’s like a lightning strike,” said Wallner. These setups also extend the systems’ lifespans. (By contrast, spark plugs must overcome the gap between electrodes and always ignite on the side of the combustion chamber – a less efficient approach.)

After testing laser ignition on a single-cylinder engine, Argonne engineers Sreenath Gupta and Bipin Bihari patented a new technique to deliver laser pulses to an entire six-cylinder engine for the first time. Gupta’s and Bihari’s laser-ignition approach improved engine efficiency by up to 3% or reduced nitrogen-oxide emissions by up to 70%.

“Our experimental and modeling teams work together in a loop,” said Riccardo Scarcelli, an engine research engineer at Argonne. ​“The data helps us to build and validate our models, and then we try to use those models to design optimized devices. Simulations give you a hint of how ignition systems could perform better,” said Scarcelli.

Ignition is so complex that most computational models of spark-based ignition systems remain fairly simplistic. Yet with its world-class facilities and expertise, Argonne is leading the way, refining these models as well as pioneering new models of advanced systems.

To develop new models, Scarcelli and his colleagues first study the basic physics of the ignition process. While spark ignition systems generate hot plasma, corona systems act differently, so modelers need to change their assumptions. ​“For example, instead of introducing heat in your model, you could use a high amount of ions or electrons – that would still trigger combustion,” said Scarcelli.

Digging deeper at the Advanced Photon Source
How do advanced ignition systems actually behave? Argonne researchers are now shedding light on ignition with endoscopes, which peer directly into combustion chambers, and the Advanced Photon Source, which produces bright, x-rays. Argonne physicists at the APS have already mapped spark-based ignition systems. Now Argonne and its partners at Sandia National Laboratories have started evaluating transient plasma ignition and are preparing to measure Gupta’s and Bihari’s laser igniters as well.

Along with experimental engine data, advanced diagnostics from the APS and Sandia provide detailed measurements that help refine Scarcelli’s models and help his colleagues to further optimize engine performance and reduce emissions.

Moving beyond the spark
By advancing the field of ignition systems through experiments, modeling, and optical research, Argonne is helping the U.S. attain energy independence and support innovation across the energy sector.

This research is funded by the Department of Energy’s Office of Energy Efficiency and Renewable Energy. 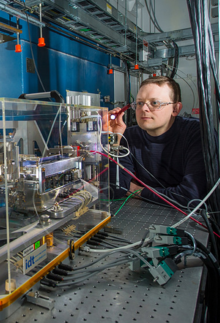 The Argonne-Sandia Partnership
Argonne is collaborating with Sandia National Laboratories to uncover the secrets of ignition systems. The laboratories are building on each other’s strengths to reveal unique aspects of both spark-based systems and advanced ignition systems. Argonne Physicist Alan Kastengren and Research Scientist Christopher Powell are mapping the heat signatures of various systems at the Advanced Photon Source. Meanwhile, Sandia scientists are measuring the chemical properties of advanced ignition plasmas. Scientists from both laboratories are sharing data, hardware, and techniques to deliver results quickly. ​“The Argonne and Sandia work complements each other,” said Kastengren.

Fuel Under Pressure: Rapid Compression Machines
To accurately model advanced ignition systems, engineers also explore the fundamental characteristics of gasoline and biofuels. To do this, Argonne engineers isolate and test the chemical kinetics of various fuels in rapid compression machines (RCMs). These machines compress fuel and air, heating the molecules to identify properties by which they autoignite under ideal conditions.

Argonne’s Engine Research Facility is one of only a handful of laboratories worldwide that study engine combustion chemistry with RCMs. Since 2012 RCM engineers and scientists have gathered to share insights at workshops every two years. At each workshop, Argonne engineers Scott Goldsborough, Douglas Longman and their peers discuss data and emerging experimental techniques, as well as new chemical kinetic models that help solve the mystery of why fuels behave in certain ways.