A theoretical formalism was described to represent electron-optical magnetic phase shift as a Radon transform of the 3D magnetic induction of the nano-object, and the tomographic reconstruction methods for vectorial data reconstruction were improved.

It was shown that the projection data for magnetic vector field tomography can be reformulated in terms of Radon projection of the magnetic induction of a nanostructure. This allows for implementing the reconstruction as a linear algebra problem such that various iterative algebraic reconstruction methods can be used. Overall, it was concluded that the iterative methods are better at reconstructing the magnetization inside the nano-object as compared to the stray field outside the object. This was demonstrated by reconstructing a more complex magnetization pattern around a domain wall in a magnetic nanowire.

Intense ongoing research on complex nanomagnetic structures requires a fundamental understanding of the 3D magnetization and the stray fields around the nano-objects. 3D visualization of such fields offers the best way to achieve this. Lorentz transmission electron microscopy provides a suitable combination of high resolution and ability to quantitatively visualize the magnetization vectors using phase retrieval methods. In this paper, we present a formalism to represent the magnetic phase shift of electrons as a Radon transform of the magnetic induction of the sample. Using this formalism, we then present the application of common tomographic methods particularly the iterative methods, to reconstruct the 3D components of the vector field. We present an analysis of the effect of missing wedge and the limited angular sampling as well as reconstruction of complex 3D magnetization in a nanowire using simulations. 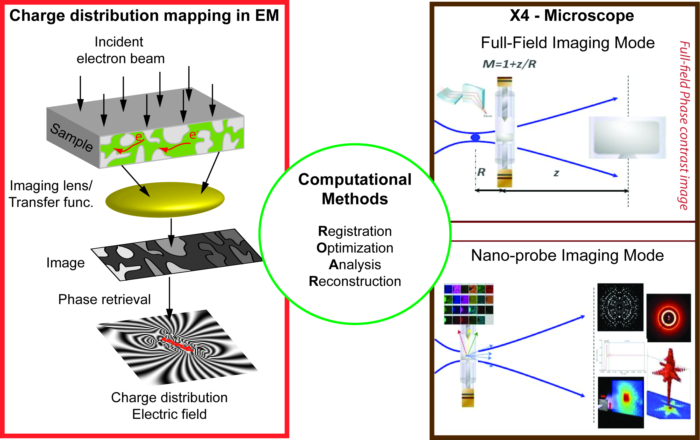