Scientific Achievement
From a combination of TEM images and density functional theory (DFT) calculations, we could infer that reduction of the Ag/AgCl to Ag occurs via formation of Cl vacancies while Ag+ ions accept electrons. A two-step oxidation process of the Ag/AgCl has been observed: rather than direct replacement of Cl by O, the Ag/AgCl heterostructure is first reduced to Ag, and then the O2 molecules react with the Ag nanoparticle. Ag2O forms at low O2 partial pressure, while AgO forms primarily at atmospheric pressure.

Significance
Understanding gas-solid catalyst reactions at the nanoscale is critical for the development of catalysts for a wide range of energy and environmental technologies. In situ environmental TEM (ETEM) has the capability to visualize the gas-solid interactions on individual catalyst nanoparticles due to its high spatial and temporal resolution, which allows us to obtain indispensible insights into how the reactions occur. Using an in situ TEM nanoreactor allowed us to directly visualize the redox process of a single Ag/AgCl heterostructure at the nanoscale under different gas pressures up to atmospheric pressure, simulating the working catalyst environment. By combining in situ ETEM results and DFT calculations, we could capture the local phase transitions that the catalyst particle undergoes.

Research Details
The expertise and capabilities of Argonne’s Center for Nanoscale Materials – including in-situ TEM techniques, DFT calculations and nanoparticle synthesis – were utilized in in this study. The environmental TEM experiment was realized using a gas flow holder with a nanoreactor in a JEOL 2100F operated with accelerating voltage of 200 kV. Two silicon chips coated with Si3N4 membranes and separated by a spacer with thickness of 100 nm formed the nanoreactor, in which the Ag/AgCl nanoparticles were sandwiched. A MEMS heating chip enabled the experiments to be carried out at elevated temperature. A gas flow rate controller and heating controller were connected to the nanoreactor, which is part of a TEM holder developed by Hummingbird Scientific Inc., to control the partial pressure of gas in the nanoreactor and the temperature. DFT calculations are performed using the generalized gradient approximation (GGA) with the parameterization of Perdew-Burke-Ernzerhof (PBE) for the exchange-correlation functional, as implemented in the Vienna Ab-initio Simulation Package (VASP).

Sponsors
US Department of Energy

Acknowledgements
Use of the Center for Nanoscale Materials, an Office of Science user facility, was supported by the U.S. Department of Energy, Office of Science, Office of Basic Energy Sciences, under Contract No. DE-AC02-06CH11357. This work used the Eztreme Science and Engineering Discovery Environment (XSEDE), which is supported by National Science Foundation grant number ACI-1053575. 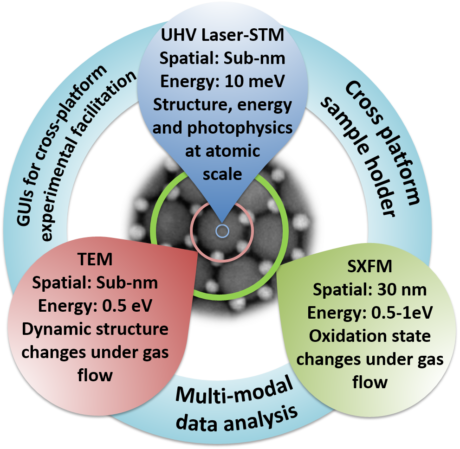 The photocatalytic conversion of CO2 to liquid fuels has the dual advantages of carbon recycling for global climate change mitigation and solar energy capture for renewable energy development.