This theme uses top-down nanofabrication techniques to direct the self-assembly from the bottom up, providing the group with nanoscale control over the morphology of soft matter, unlocking new material properties, functionalities and applications. 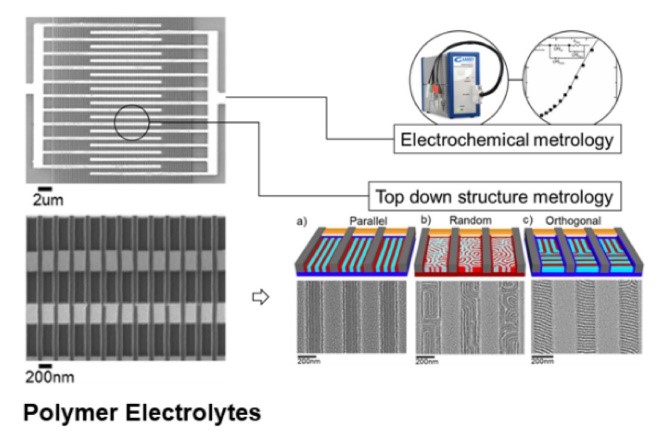 Ionic conducting polymers are of continued interest for their potential application in solid state batteries, water filtration membranes, fuel cells and supercapacitors. In particular, block copolymer (BCP) electrolytes (BCEs) can provide both ionic conductive and mechanically robust domains that might be crucial for technologies such as lithium metal batteries. Our group focuses on understanding the role of sequence and charge distribution on the molecular structure of hetero-charged polyelectrolytes. Although BCEs offer the prospect for high ionic conductivity alongside the desired mechanical properties, achieving conductivities in the nanostructured material comparable to those of the ion-conducting component alone has remained elusive. In the absence of specialized assembly techniques, block copolymer systems are typically ordered only on length scales of one micron or less. To overcome this limitation, our lab implemented an experimental platform using the self-assembly of BCP thin films on interdigitated electrodes: post-assembly functionalization of BCPs into BCEs with retention of structure, quantitative characterization of all areas of the thin film (between the electrodes) contributing to ion conduction, and electrochemical impedance spectroscopy (EIS) to unambiguously elucidate fundamental structure/ion-transport relationships in BCEs.

For example, recent work by our group demonstrated that the ionic conductivity of well-defined PS-b-P2VP/NMP+ I- BCEs could be predicted a priori by morphology arguments. By orienting the microdomains in the BCE through thin-film topographical alignment strategies, the relationship between the nanostructure and electrochemical behavior was elucidated. The conductivity of the phase-separated films was found to increase with alignment of the lamellar BCE domains parallel to the applied electric field, while the capacitance decreased with alignment parallel to the applied electric field. It was demonstrated that structural arguments alone are sufficient to predict the conductivity values for phase-separated films. 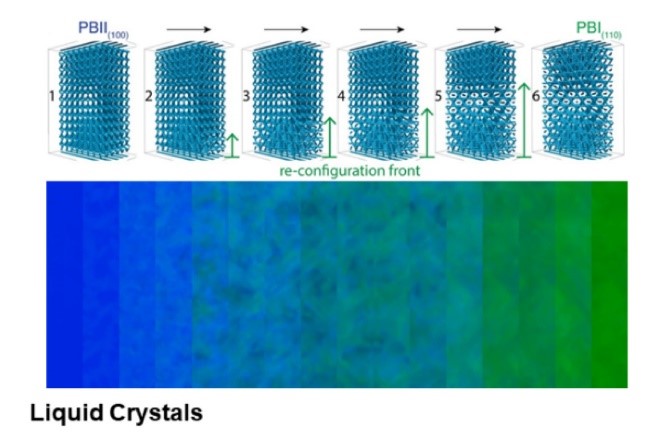 Liquid crystals (LCs) exhibit a combination of long-range orientational ordering, fluidity and controllable surface interactions, which together provide an ideal platform for various applications including, famously, the modulation of light in display technologies. The orientation of LCs at a surface is governed by the surface anchoring, which includes contributions from van der Waals, dipole–dipole, π–π stacking, hydrogen bonding, and steric interactions. The equilibrium morphology of the LCs in contact with a surface, therefore, reflects a balance between elastic and surface contributions to the free energy of the system. Working within the SSAGES code team of the Midwest Integrated Center for Computational Materials (MICCoM), the Nealey Group focuses on designing and fabricating chemically patterned surfaces that impart anchoring contrast to the LCs, thereby allowing us to engineer the morphology of different LC phases, such as the nematic, smectic and blue phases. MICCoM, headquartered at Argonne National Laboratory and funded by U.S. Department of Energy, Office of Science, Office of Basic Energy Sciences, develops and disseminates interoperable open source software, data and validation procedures, enabling the community to predict properties of functional materials. Our experimental platform, based on this directed self-assembly (DSA) of LCs by chemically-patterned surfaces, allows us to control the control LC orientation, study LC topological defects, assemble colloidal particle assemblies within the LC morphology, fabricate reconfigurable metasurfaces, and achieve single crystalline blue phase. In doing so, we accelerate the discovery of innovative functional materials, validating experimentally the LC assembly processes predicted and simulated by our MICCoM colleagues. DSA of LCs opens exciting opportunities to apply this fascinating material type to the exploration and development of new LC-based functionalities, including devices for advanced optical devices or soft material design.

Our recent work focuses on a new strategy to direct the self-assembly of blue phase LC phases to produce macroscopic single blue phase crystals. This strategy is based on the use of chemical patterns designed using insights gleaned from field theoretic calculations. We are therefore able to characterize and analyze heterogeneous LC nucleation and growth mechanisms on nano-patterned surfaces using both experiments and theoretical calculations. Another current topic is the design, fabrication, characterization and simulation of dynamically reconfigurable optical metasurfaces via the DSA of optically resonant nanoparticles within chemically patterned LC phases.

Engineering the grain boundaries of crystalline materials represents an enduring challenge, particularly in the case of soft materials. Grain boundaries, however, can provide preferential sites for chemical reactions, adsorption processes, nucleation of phase transitions and mechanical transformations. In this work, ​“soft heteroepitaxy” is used to exert precise control over the lattice orientation of three-dimensional liquid crystalline soft crystals, thereby granting the ability to sculpt the grain boundaries between them. Since these soft crystals are liquid-like in nature, the heteroepitaxy approach introduced here provides a clear strategy to accurately mold liquid-liquid interfaces in structured liquids with a hitherto unavailable level of precision.