Julie Jastrow, an ecologist and soil scientist at the U.S. Department of Energy’s (DOE) Argonne National Laboratory, has been named a Fellow of the American Association for the Advancement of Science (AAAS).

AAAS Fellows are nominated for their ​“efforts on behalf of the advancement of science or its applications [that] are scientifically or socially distinguished,” according to the AAAS. The Association elected its first fellows in 1874.

Jastrow’s induction as an AAAS Fellow came as a result of her ​“distinguished contributions to understanding plant-microbe-soil interactions, and for dedicated service to the field of soil science.”

Jastrow has spent her entire professional career at Argonne, where she is an Argonne Distinguished Fellow and group leader in the Environmental Science division. A member of the Northwestern-Argonne Institute for Science and Engineering, she received her Ph.D. from the University of Illinois at Chicago and her M.S. and B.S. from the University of Illinois at Urbana-Champaign.

“The dark mysteries of soil functions are critical for sustaining life on Earth as we know it,” Jastrow said. ​“I’ve had the opportunity to study how complex soil processes respond to environmental stresses and perturbations because of long-term support from DOE’s Office of Biological and Environmental Research.”

Presently, Jastrow’s research focuses on factors affecting the distribution, composition and decomposability of organic matter stored in soils of the semifrozen regions of the northern latitudes that are known to sequester carbon. She also studies the climate adaptation and sustainability of perennial bioenergy crops across continental-scale environmental gradients.

Jastrow has served as president of the Soil Ecology Society, and she was chosen by the Soil Science Society of America to deliver the 15th Francis E. Clark Distinguished Lectureship on Soil Biology. In 2014, she received the UChicago-Argonne Board of Governors Distinguished Performance Award.

Scientists from Argonne will study the soil around ground-mounted solar panels and develop a national soil database to better understand impacts on the ecosystem.
November 30, 2022 | Environmental and Earth Science, Site Restoration, Soil Science 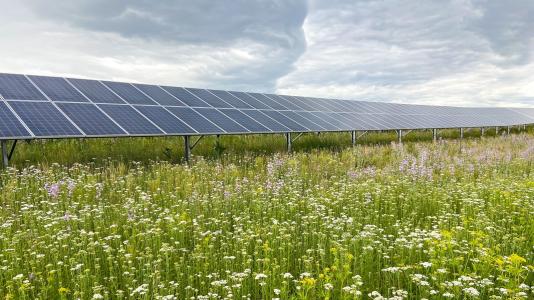