By
Kristen Mally Dean
|
December 1, 2021
Ultrabright light from the Advanced Photon Source continues to illuminate mysteries around coronaviruses and shape the vaccines and therapeutics protecting us against variants of concern.

It’s been nearly two years since the first outbreaks of COVID-19. In that time, facilities such as the Advanced Photon Source (APS), a U.S. Department of Energy (DOE) Office of Science user facility at DOE’s Argonne National Laboratory, have proved integral to the fight against the disease.

Building on more than a decade of research into similar viruses, scientists using the ultrabright X-rays of the APS have been instrumental in the development of vaccines and treatments against SARS-CoV-2, the virus that causes COVID-19. Now research has pivoted to the variants of the virus, and determining whether the approved vaccines will be effective against them.

“Time is of the essence in combating this virus. We are enormously appreciative of APS remaining open throughout the pandemic for COVID-related experiments.”  — Ian Wilson, Scripps Research.

Nearly all viruses, including SARS-CoV-2, attempt to mutate in wily efforts to ​“escape” eradication. Some of these variants disappear as quickly as they emerge. Others linger and are classified as variants of concern (VOCs).

VOCs become highly problematic when established human means of eradicating them fail to have the desired effect. A vaccinated person’s immune system knows to produce virus-fighting antibodies when it sees certain molecular characteristics. However, the SARS-CoV-2 virus’s spike protein molecule — which the APS helped researchers identify as the target site of current vaccines — has been able to mutate ever so slightly and still attach itself to human cells more readily or tightly. Depending on the degree of mutation, antibodies can then fail to recognize the mutated viruses.

Such variants and mutations of SARS-CoV-2 were always expected, and APS beamlines were used from an early date to study them.

Ian Wilson, a scientist at the Scripps Research Institute, leads a laboratory whose APS-informed work has advanced understanding of dominant and emerging variants of the virus. The Wilson lab, spearheaded by postdoctoral fellows Meng Yuan and Nicholas Wu (now an assistant professor at University of Illinois Urbana-Champaign), first looked at SARS-CoV-2 at the APS in February 2020, shortly after its genome was released.

They specifically narrowed their lens on the receptor binding domain (RBD) of the spike protein. The RBD is a part of the virus that latches onto and invades cells to increase infection. This focus helped the Wilson lab determine crystal structures of many human antibodies combined with the RBD and see exactly how antibodies target and neutralize the virus.

Ten months later, when it was reported that SARS-CoV-2 was infecting farmed mink in Denmark and that the mutated viruses were transmissible to humans, the Wilson lab built on this initial research to study the emerging variants. They initially identified vulnerable sites on the virus surface that could be targeted by neutralizing antibodies. They also identified the more conserved sites — regions on the viral surface that are often less mutated — which, when targeted by antibodies, are effective at neutralizing the virus’s emerging variants.

Conserved sites of the viral surface, it turns out, are critical to study because while the virus may relentlessly change, certain regions of its spike protein cannot accommodate mutations, as they would lose essential viral function and fitness. By changing too much, the virus wouldn’t be itself anymore. Antibodies target these sites and more changeable sites with different degrees of success.

“Only a small portion of antibodies isolated from COVID-19 patients can cross-react with related SARS-like viruses,” explained Yuan of results published in Cell Host & Microbe. ​“Some can neutralize these different viruses and are termed cross-neutralizing. Our study was able to reveal conserved regions on these different viruses that can be targeted by cross-neutralizing antibodies.”

In another study of the virus’s escape mechanism published in Science, the Wilson lab tested a panel of 17 neutralizing antibodies isolated from COVID-19 patients, or from mice designed to carry human cells or human genetic and physiological properties. In these tests, two mutations of the virus in the RBD were particularly able to evade a number of neutralizing antibodies. However, when more conserved sites were tested, the variants fared less well; the antibodies were still able to target the variants.

Jonathan Abraham, an assistant professor of microbiology at Harvard University, is another researcher who used the APS to examine antibody response to SARS-CoV-2. He was buried in a different project using data collected at the APS when he attended a clinical presentation about a local patient infected with SARS-CoV-2.

“[The patient] had a five-month-long infection and was receiving therapy to treat an autoimmune condition,” explained Abraham. ​“One of our colleagues sequenced the virus, and I remember seeing the SARS-CoV-2 RBD sequences and having an ​“aha!” moment.”

As detailed in Cell, Abraham studied viral sequences collected from the patient at various times during infection — from up to 152 days after they were diagnosed with COVID-19. He found that the immunocompromised patient’s virus over time evolved to acquire RBD mutations that could fool antibodies into no longer recognizing it.

When X-ray crystal structures of the antibodies were examined at the APS, it became clear that the SARS-CoV-2 spike protein can build a mature resistance to antibodies — and scientists can see exactly where it did so at a molecular level.

“We were compelled to move forward with experiments to better understand the significance of these mutations to receptor and neutralizing antibody binding,” said Abraham. ​“Many of the RBD mutations we were studying because they arose in this individual later emerged as part of variants of concern.”

Wilson and Abraham give credit to those at Argonne who worked hard to make APS beamlines available for SARS-CoV-2 research. Their dedication, professionalism and fast response times were critical.

“APS staff on numerous occasions have gone above and beyond to help us secure beam time to study SARS-CoV-2 antibodies and spike protein fragments,” said Abraham. ​“The Argonne technicians and scientists who work on the beamlines have simply been outstanding, and they often provided training and instruction to graduate students who were leading the SARS-CoV-2 research projects in our lab.”

“Time is of the essence in combating this virus,” said Wilson. ​“We are enormously appreciative of APS remaining open throughout the pandemic for COVID-related experiments.”

The APS has been a powerful tool in the battle against the novel coronavirus, contributing more information about the structure of the virus to the International Protein Databank than any other light source in the United States.
December 10, 2020 | Biology, Structural Biology, Diseases
Feature Story

Advanced Photon Source at the heart of COVID-19 research

Argonne scientists, working as part of a national consortium of structural genomics experts, have greatly increased our knowledge of the virus that causes COVID-19.
November 11, 2020 | Biology, Molecular Biology, Protein Science 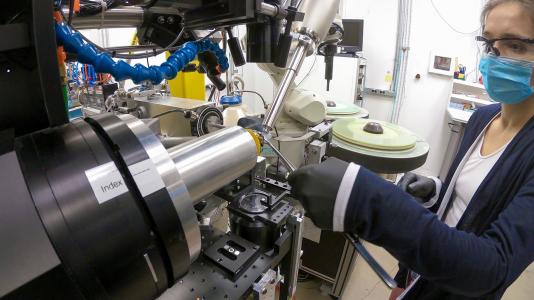