Quantum computers promise to revolutionize science by enabling computations that were once thought impossible. But for quantum computers to become an everyday reality, there is a long way to go and many challenging tests to pass.

One of the tests involves using quantum computers to simulate the properties of materials for next-generation quantum technologies.

In a new study from the U.S. Department of Energy’s (DOE) Argonne National Laboratory and the University of Chicago, researchers performed quantum simulations of spin defects, which are specific impurities in materials that could offer a promising basis for new quantum technologies. The study improved the accuracy of calculations on quantum computers by correcting for noise introduced by quantum hardware.

“We want to learn how to use new computational technologies that are up-and-coming. Developing robust strategies in the early days of quantum computing is an important first step in being able to understand how to use these machines efficiently in the future.” — Giulia Galli, Argonne and University of Chicago

The research was conducted as part of the Midwest Integrated Center for Computational Materials (MICCoM), a DOE computational materials science program headquartered at Argonne, as well as Q-NEXT, a DOE National Quantum Information Science Research Center.

“The reasons we do these kinds of simulations is to gain a fundamental understanding of materials properties and also to tell experimentalists how to eventually better design materials for new technologies,” said Giulia Galli, a professor in the Pritzker School of Molecular Engineering and the Department of Chemistry at the University of Chicago, senior scientist at Argonne National Laboratory, Q-NEXT collaborator and director of MICCoM. ​“Experimental results obtained for quantum systems are often rather intricate and may be hard to interpret. Having a simulation is important to help interpret experimental results and then put forward new predictions.”

“We want to learn how to use new computational technologies that are up-and-coming,” said Galli, lead author of the paper. ​“Developing robust strategies in the early days of quantum computing is an important first step in being able to understand how to use these machines efficiently in the future.”

Looking at spin defects offers a real-world system to validate the capabilities of quantum computers.

“The great majority of calculations with quantum computers these days are on model systems,” Galli said. ​“These models are interesting in theory, but simulating an actual material of experimental interest is more valuable to the whole scientific community.”

Performing calculations of the properties of materials and molecules on quantum computers faces a problem that one does not experience with a classical computer, a phenomenon known as hardware noise. Noisy calculations return slightly different answers each time a calculation is performed; a noisy addition operation might return values slightly different from 4 each time for the question, ​“What is 2 plus 2?”.

“The uncertainty in the measurement depends on the quantum hardware,” said Argonne scientist Marco Govoni, co-lead author of the study. ​“One of the accomplishments of our work is that we were able to correct our simulations to compensate for the noise that we encountered on the hardware.”

Understanding how to handle the noise in quantum computers for realistic simulations is an important result, said University of Chicago graduate student Benchen Huang, the first author of the study.

“We can anticipate that in the future we might have noiseless quantum computing — learning how to eliminate or cancel the noise in our simulation will also teach us whether quantum advantage may become a reality and for which problems in materials science.”

In the end, according to Galli, the groundbreaking potential of quantum computers will motivate more work along these lines.

“We’ve just started,” she said. ​“The road ahead looks full of exciting challenges.”

A paper based on the study ​“Simulating the Electronic Structure of Spin Defects on Quantum Computers” appeared online in Physical Review X Quantum on March 10.

Apply by March 1 for an opportunity to learn the tools and techniques needed to carry out research on the world’s most powerful supercomputers.
February 08, 2021 | High Performance Computing, Modeling and Simulation, Computer Science and Engineering 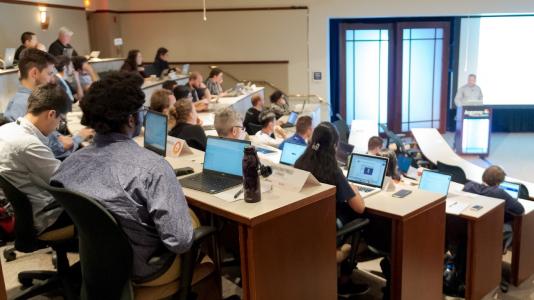