By
Jared Sagoff
|
October 18, 2019
Scientists use X-rays to see the true nature of chocolate.

The taste of a silky piece of rich chocolate is one of life’s great pleasures, and producing a smooth mouthfeel is an aspiration of every serious chocolatier.

The characteristics that truly set haute chocolate apart can be seen at the microscale thanks to recent, pivotal research performed by researchers from the University of Guelph at the Advanced Photon Source (APS) located at the U.S. Department of Energy’s (DOE) Argonne National Laboratory.

“Based on how compact or how open the structure is, that can possibly have an impact on how fast or how slowly the chocolate melts.” — Jan Ilavsky, Argonne X-ray physicist

In a series of studies, University of Guelph researcher Fernanda Peyronel used a technique called ultra-small-angle X-ray scattering (USAXS) to investigate a property called fractal dimension, a particular feature of the geometric configuration of tiny particles of chocolate.

“Basically, we’re trying to see whether these particles have a more open or a more closed structure and to correlate that to the mouthfeel experienced by consumers,” Peyronel said.

The USAXS technique allows scientists to resolve particles that range in size from a few hundred nanometers to around 10 micrometers — roughly the limit at which our taste buds can distinguish different textures. The beamline at the APS also accommodates detectors for small-angle X-ray scattering as well as large-angle X-ray scattering. These allow scientists to study their systems from less than a nanometer to around 10 micrometers.

Argonne X-ray physicist Jan Ilavsky, who runs the USAXS beamline at the APS — a DOE Office of Science User Facility — and collaborates with Peyronel on the chocolate studies, explained that the smooth versus grainy texture of a piece of chocolate could be due to the amount of open space within the chocolate at the microscopic level, which could change how it melts on the tongue.

“Our tongues are actually pretty good detectors at this length scale,” he said. ​“Based on how compact or how open the structure is, that can possibly have an impact on how fast or how slowly the chocolate melts.”

According to Peyronel, smooth and creamy chocolate typically results from a process known as tempering, in which the chocolate mixture is repeatedly heated and cooled. If a chocolate is tempered improperly, or not at all, a grainy mouthfeel might result — and the particles’ structure would look different.

“When you’re talking about a chocolate manufacturer that is tempering tons and tons of chocolate, knowing how that process is affecting how the chocolate tastes is very important,” she said.

The tempering process requires a considerable amount of time and energy, Ilavsky said, representing a major source of the cost of preparing a delicious chocolate. ​“We’re not merely interested in this question because we want to find out why chocolate tastes good,” he said. ​“There are major energy and cost savings to be gained as well.”

Previous food science work using the USAXS technique had focused primarily on other edible fats, such as cocoa butter. By looking at chocolate as a multi-ingredient matrix that contains not only cocoa butter but also cocoa powder, sugar and an emulsifier such as lecithin, Peyronel hoped to achieve a more comprehensive insight into the relationship between chocolate microstructure and mouthfeel.

“Some chocolate makers want to replace some of the cocoa butter, because this edible fat is quite expensive,” Peyronel said. ​“However, it’s unclear how the cocoa butter affects the microstructure.”

Although the atomic and molecular structures of chocolate are well known, Peyronel said, those are not what chocolate consumers experience in their mouths. Instead, a key indicator that has been used to characterize a good chocolate is called a polymorph. The best polymorph, according to Peyronel, is called βV (beta-5), indicating a configuration in which the atoms are nearly at their energetic minima. ​“A lot of thought is going into trying to create a βv polymorph in the chocolate and have it be stable,” she said.

The USAXS instrument provides a unique view into the characteristics of chocolate and other materials, Ilavsky explained.

“USAXS at the APS is one of the few available instruments in the world that can measure materials at all of these different length scales at once,” he said. ​“The cool thing about X-ray scattering is that you can study a much larger volume of your material at the same time, so instead of getting detailed information about a few particles, you’re getting a statistically averaged picture of a much larger region.”

This research is funded by Natural Sciences and Engineering Research Council of Canada. 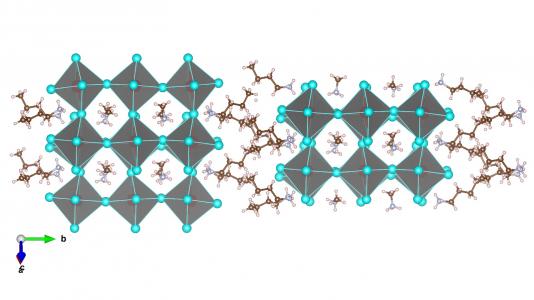