By
Matthew Chin and Andre Salles
|
March 10, 2021
The new material, which the Advanced Photon Source helped characterize, is strong yet stretchable, and could be ideal for creating artificial tendons and ligaments for prosthetics and robotics.

A research team led by the University of California, Los Angeles (UCLA) has developed a new method to make synthetic biomaterials that mimic the internal structure, stretchiness, strength and durability of tendons and other biological tissues. The structure of these biomaterials was investigated at the Advanced Photon Source (APS), a U.S. Department of Energy Office (DOE) of Science User Facility at DOE’s Argonne National Laboratory.

Researchers developed a two-pronged process to enhance the strength of existing hydrogels that could be used to create artificial tendons, ligaments and cartilage that are 10 times tougher than the natural tissues. Hydrogels are a broad class of materials with interior structures made up of crisscrossing polymers or gels. They show promise for use as replacement tissues, either to temporarily close wounds or as a long-term or even permanent solution. In addition, the gels may have applications for soft robots and wearable electronics.

“We have a large, fast detector that can capture the X-rays scattered off the material as it is stretched. This material is remarkable. Like a natural tendon, it is organized into a network of fibrils, that allows it to sustain very large strains.” — Joe Strzalka, physicist, Argonne National Laboratory

Although the hydrogels contain mostly water with little solid content — they are about 10% polymer — they are more durable than Kevlar and rubber, which are 100% polymers. The new hydrogels could also provide coating for implanted or wearable medical devices to improve their fit, comfort and long-term performance. The study was published in Nature.

“This work shows a very promising pathway toward artificial biomaterials that are on par with, if not stronger than, natural load-bearing biological tissues,” said study leader Ximin He, an assistant professor of materials science and engineering at the UCLA Samueli School of Engineering.

Researchers investigated the structure that enables the durability and flexibility of their new material at APS beamline 8-ID-E. Beamline staff used a tool developed at the beamline to stretch and pull a sample of the material while it was exposed to the ultrabright X-rays of the APS, to probe the material’s microstructure.

“We have a large, fast detector that can capture the X-rays scattered off the material as it is stretched,” said Joe Strzalka, physicist with Argonne’s X-ray Science Division and a co-author on the paper. ​“This material is remarkable. Like a natural tendon, it is organized into a network of fibrils, that allows it to sustain very large strains.”

X-ray scattering techniques allow researchers to see the changes their material goes through as it is stretched out or strained, said Hua Zhou, physicist with Argonne’s X-ray Science Division and a co-author on the paper. These data showed a material that well surpassed the high stress and strain values seen in many reported tough hydrogels, as well as exhibiting strong fatigue resistance and ability to return to its original shape.

“The data captured at the APS can complement microscopy data to give researchers a good picture of what actually happens when the material is strained,” Zhou said. ​“This beamline is perfect for testing the relationship between the structural and mechanical properties of soft materials.”

Current hydrogels are not strong or durable enough to mimic or replace tissues that need to move and flex repeatedly while bearing weight. To address these issues, the UCLA-led team employed a combination of molecular and structural engineering approaches that were not previously utilized together to make hydrogels.

First, the researchers used a method called ​“freeze-casting” — a solidifying process that results in porous and concentrated polymers, similar to a sponge. Second, they used a ​“salting-out” treatment to aggregate and crystalize polymer chains into strong fibrils. The resulting new hydrogels have a series of connecting structures across several different scales — from molecular levels up to a few millimeters. The hierarchy of these multiple structures, similar to that of biological counterparts, enables the material to be stronger and more stretchable.

As demonstrated by the team, this versatile method is highly customizable to create hydrogels of a broad range of stiffness that match various soft tissues in the human body and could replicate and even strengthen various soft materials.

The researchers used polyvinyl alcohol, a material already approved by the U.S. Food and Drug Administration, to make their hydrogel prototype. They tested its durability, seeing no signs of deterioration after 30,000 cycles of stretch testing. Under light, the new hydrogel produced a vivid shimmer, similar to real tendons, confirming the micro/nano structures that formed in the gel.

In additional to biomedical applications, the advance may hold potential for surgical machines or bioelectronics that operate innumerable cycles, and 3D printing of previously unachievable configuration, thanks to the hydrogel’s flexibility. In fact, the team demonstrated that such 3D-printed tough hydrogel architectures can transform into other shapes upon environmental cues and generate much large force acting as artificial muscles.

The research was supported by the National Science Foundation, Air Force Office of Scientific Research, and the Office of Naval Research. 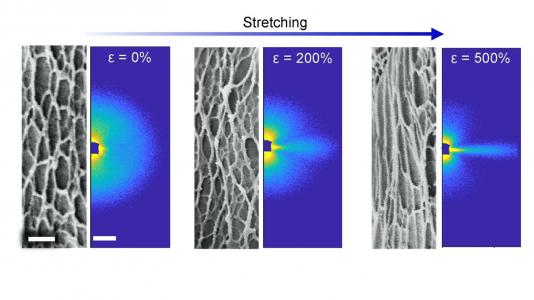 Polymer membranes could benefit from taking a dip