By
Liz Thompson
|
April 27, 2021
Research partly conducted at the Advanced Photon Source helped scientists discover the composition of Earth’s first atmosphere. What they found raises questions about the origin of life on Earth.

A long time ago, as our solar system was forming into the planets we know today, Earth was essentially a giant ball of molten lava. Approximately 4.5 billion years ago, scientists believe that Earth collided with a planet the size of Mars. The energy from this catastrophic collision blew Earth’s existing atmosphere into space, created our Moon, and caused the entire planet to melt.

Over time, this worldwide magma ocean released gases such as nitrogen, hydrogen, carbon and oxygen, creating a new atmosphere, the oldest version of the one we have today. But what, exactly, was that early atmosphere like? And why is our atmosphere now so different from those of our cosmic neighbors? These questions have perplexed scientists for generations, but the answers have eluded us until recently.

“We found that the atmosphere we calculated to have been present on Earth billions of years ago was similar in composition to what we find on Venus and Mars today.” — Paolo Sossi

Now an international team of scientists exploring the origins of Earth’s atmosphere have found that ours was once very similar to the atmosphere found on Venus and Mars today. Their findings, recently published in the journal Science Advances, have implications that go well beyond the chemical composition of Earth’s early atmosphere, as the results poke holes in a popular theory of the evolution of life itself.

It turns out clues to Earth’s early atmosphere were buried in our oldest rocks. What it took to uncover them was a laser furnace, a levitating ball of lava and the Advanced Photon Source (APS), a U.S. Department of Energy (DOE) Office of Science User Facility at DOE’s Argonne National Laboratory.

The research team, led by Paolo Sossi, now a senior research fellow at Eidgenössische Technische Hochschule (ETH) Zürich and the National Centre of Competence in Research (NCCR) PlanetS, set out to unlock these secrets. Although they had no way of measuring Earth’s ancient atmosphere directly, they found a way to measure the exact composition of the atmosphere when Earth’s oldest rocks were formed.

“Four-and-a-half billion years ago, the magma — the molten rock that now lies beneath the Earth’s crust — constantly exchanged gases with the overlying atmosphere,” Sossi explained. ​“The air and the magma influenced each other. So, you can learn about one from the other.”

However, to understand the exact composition of Earth’s early atmosphere, the scientists essentially needed to create a miniature version of the early Earth (and its atmosphere) in the lab. To do this, they assembled the elemental components of the Earth’s early mantle (known to geologists at peridotite), heated it with a laser until it became molten lava and then levitated this ball of molten lava in a stream of gas meant to represent Earth’s earliest atmosphere.

When the lava cooled, the marble-sized glass ball that remained had trapped a record of the chemical reaction between the lava and the atmosphere in the iron it contained. The technological advances that made this experiment possible only came about recently. In order to melt peridotite, you have to get it very, very hot — nearly 2000°C — and then quench it quickly to preserve the chemistry at high temperatures. The ability to do this was made possible with the development of a new laser furnace technique.

The scientists repeated the experiment a number of times using various chemical compositions of gases that could have existed in the early atmosphere, then studied the iron oxidation state in the samples, looking for ones that most closely resembled those found in Earth’s mantle rocks. Comparing the iron oxidation state in natural rocks with the ones formed in the lab gave the scientists an idea of which one of their gas mixtures matched Earth’s early atmosphere.

“We found that the atmosphere we calculated to have been present on Earth billions of years ago was similar in composition to what we find on Venus and Mars today,” said Sossi, who knew he had the correct atmospheric composition when the iron oxidation state in their sample matched those found in ancient rocks from Earth’s mantle. ​“When you have an atmosphere produced from magma at the right oxidation state, you get one made up of about 97 percent carbon dioxide and 3 percent nitrogen once it cools down, the same ratio found today on Venus and Mars.”

For years, geologists have turned to the APS to study the composition of rocks and the oxidation state of the iron contained within them. One particular beamline at the APS managed by scientists from the University of Chicago, GeoSoilEnviroCARS (13-ID-E), has become a world leader in this type of research and analysis. When the time came for the scientists to have their samples analyzed, there was an obvious place to go.

“The APS gives us the ability to make very small beams that we can do this type of analysis with,” said Matt Newville, a senior research associate and beamline scientist at the APS and an author on the paper. The beamline he works on can focus its beams to as small as 1 micron across – about 50 times smaller than the width of a human hair – giving scientists the ability to make very precise and accurate measurements of their samples.

“We do this type of analysis on rocks all the time, but these were amazingly well-created samples,” said Newville. ​“That they were able to get these samples that were very good at simulating the effect of the early atmosphere is really incredible.”

Not only do these samples provide a way to measure the composition of Earth’s ancient atmosphere, but they also put some geological constraints on a popular theory of the origin of life. In the 1950s, Stanley Miller conducted a groundbreaking experiment at the University of Chicago showing that amino acids — the building blocks of life — would form in an environment with liquid water and air rich in methane and ammonia when zapped with electricity to simulate lightning. At the time, these were the conditions believed to exist on the early Earth.

However, if Earth’s early atmosphere was instead rich in carbon dioxide and nitrogen as this new research indicates, it would make it more difficult for these amino acids to form.

These experiments also helped answer questions as to why Earth’s current atmosphere is so different from our neighboring planets. On Earth, liquid water formed out of this magma-made atmosphere, pulling carbon dioxide out of the air and into newly forming oceans. Sossi said that because all three planets — Earth, Venus and Mars — were formed from similar materials, it was the combined effects of both the Earth’s large mass and its particular distance from the Sun that enabled it to retain liquid water on its surface, which then caused a carbon dioxide drawdown. Whereas that wasn’t the case on Venus because it was too hot, or on Mars because it was too cold.

Now that Sossi has figured out what type of atmosphere forms from a magma-Earth, he is setting his sights on the stars. Using a modification of this experimental technique, he hopes to find a way to measure atmospheric composition using infrared so that one day we can use satellites to study magma worlds that may actually exist in other solar systems today.

Scientists using a unique combination of capabilities at the Advanced Photon Source have learned more about how meteorites affect one of the most abundant materials in the Earth’s crust.
December 02, 2020 | Planetary Science, Environmental and Earth Science, Geology 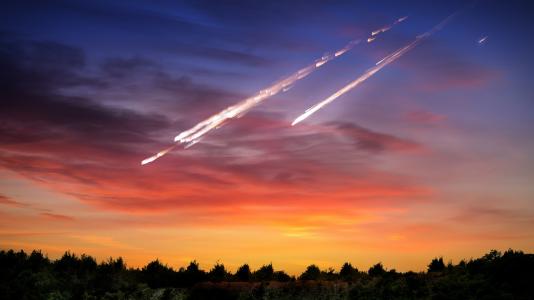