Nature provides a myriad of ways to keep check on its health. One of the more successful indicators is the status of its soil organic carbon, or the concentration of carbon in the organic fraction of soil that consists of decaying vegetation or animal products. A small change in carbon levels can dramatically alter atmospheric carbon concentrations and affect climate.

“We believe that the scaling functions we developed in this research … can improve the spatial representation of soil organic carbon in land surface within Earth system models.” — Umakant Mishra, Argonne geospatial scientist

A collaboration between the U.S. Department of Agriculture and several DOE National Labs, including Argonne, set out to predict and model the effect of environmental controllers, or soil-forming factors — climate, organisms, topography, parent material and time — on soil organic carbon at different spatial scales across the continental United States.

The results of the soil organic carbon study are intended to reduce uncertainty in predicting global carbon climate feedbacks and associated climate changes. They also could provide more certainty as to how future climate extremes may impact the activities of numerous industries, from agriculture and crop insurance industries to natural resource conservation industries.

Researchers, for the first time, were able to generate scaling algorithms to account for such a large geographic region by using a large set of recently available field observations, a large number of environmental factors and a machine learning algorithm — an artificial intelligence method that learns from specific data to progressively improve predictions of new, similar data.

In this case, scale refers to the area across which soil organic carbon properties are assumed to be similar, and scaling takes information collected from one spatial scale and applies it to another. With the region broken down into a pattern of grid cells, the spatial scale used in this research ranged from a finer resolution of 100 m to a more course 50 km between grid centers.

“The soil organic carbon content differs in different sampling locations, that’s why we need to sample at representative locations if we intend to capture the spatial heterogeneity of soil properties in the study area,” Mishra said.

The scaling algorithms that he and his collaborators created as part of the research are important to Earth system models, like the DOE’s Energy Exascale Earth System Model, in addition to predicting changes in climate more accurately.

Scaling, Mishra noted, is an issue which has traditionally been ignored in biogeochemical/natural sciences, where it was believed that properties or processes associated with one spatial scale can be applied at both smaller or larger scales. In reality, however this is not the case.

Current Earth system models, which are used to predict the future global carbon climate feedbacks and associated climate changes, operate at coarse spatial scales (50-100 km) and are currently unable to represent environmental controllers and their effect on soil organic carbon in a manner consistent with field observations.

“The control of environmental factors on soil organic carbon is not consistent with the observations in the current land surface models,” he added. ​“We believe that the scaling functions we developed in this research, which are drawn from numerous samples across a large geographical area, can improve the spatial representation of soil organic carbon in land surface within Earth system models.”

Among the results of the team’s recent work, models showed that topographic and soil attributes were significant controllers of soil organic carbon at finer scales. At the coarser end of the scale, climatic and land use factors served as important controllers.

An article on the study, ​“Importance and strength of environmental controllers of soil organic carbon changes with scale,” appears in the October 1, 2020, issue of Geoderma (published online, June 23, 2020).

Funding for this study was provided in part by the DOE’s Office of Science. 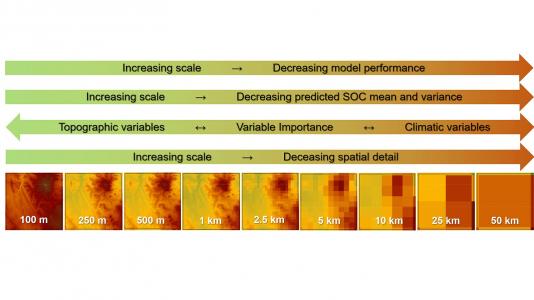 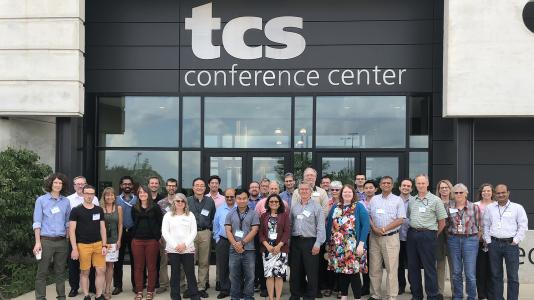