Made from organic waste, renewable natural gas (RNG) is rapidly gaining ground as an alternative fuel source with the potential to significantly reduce greenhouse gas emissions.

Argonne maintains a database of renewable natural gas transportation projects that are currently in operation or under construction.

Built on an Excel-based platform, the database provides a comprehensive list of projects that upgrade biogas for pipeline injection or on-site dispensing as vehicle fuel.

Along with the nonprofit Energy Vision, Argonne has tracked these projects for the past five years, recording sustained, rapid growth. Data shows that between 2019 and 2021, the number of projects that are operational, under construction or planned for transportation increased from 219 to 402 total projects, which is an 85% increase.

“Renewable natural gas is a very attractive option for decarbonizing heavy-duty transportation, which is very difficult to do,” Mintz said. ​“RNG is a ​‘drop-in fuel,’ meaning any natural gas engine can use RNG in the same way as fossil-natural gas. RNG uses existing technology and infrastructure, and no engine modifications are needed. RNG can be transported in any pipeline network. Using RNG in larger vehicles like heavy-duty trucks and buses reduces the damaging effects of diesel emissions on air quality and health.”

While fossil natural gas comes from deep below the earth’s surface, RNG is created from organic waste already around us in landfills, farms and livestock operations, wastewater plants and food-processing facilities.

As they decompose, these wastes emit biogas composed mostly of methane, a powerful greenhouse gas more damaging than carbon dioxide if released into the atmosphere. The biogas is captured, purified and compressed to become RNG, also known as biomethane.

Currently, RNG is primarily used as a substitute for conventional natural gas which itself is a substitute for diesel in heavy-duty vehicles like semis. While electric cars are now a viable, clean-energy solution, heavy-duty trucks will take longer to successfully electrify, making RNG a good fuel for near-term decarbonization in large vehicles.

Argonne data shows that in 2021, the 230 operational RNG facilities alone produced over 59 million MMBtus, the equivalent of over 459 million gallons of diesel, which is enough to fuel 50,000 refuse trucks. That growth represents a 30% increase in production capacity since 2020.

Growth in production and use of RNG is closely tied to federal and state incentives, which are expanding. For example, California awards credits through its Low Carbon Fuel Standard (LCFS), which focuses on reducing the carbon content of fuels used within the state.

“Other states are moving in the same direction as California,” Mintz said. ​“Oregon and Washington have adopted clean fuel standards and several other states are considering adopting similar legislation.”

“Demand is highest right now for the lowest carbon intensity RNG projects, but there is a market for all feedstock projects,” Mintz said.

Projects run the gamut in terms of size, scope and cost, from individual dairies to clusters of five or more farms, to landfills generating enough RNG to displace millions of diesel gallons. For example, McCommas Bluff Landfill, Dallas, owned by the City of Dallas and Energy Power Partners, creates RNG and injects it into the pipeline infrastructure. The RNG is predominantly used to produce renewable electric power by a California municipal utility.

Several large developers are building multiple landfill projects, while other projects are operating on a smaller scale. St. Landry Parish Landfill in Opelousas, Louisiana, produces RNG for an on-site fueling station that powers the Sheriff’s Department cars and light-duty trucks and vans. In Madison, Wisconsin, the Dane County Landfill started as a small-scale project for about 30 vehicles and has since expanded with a $28 million facility to create RNG.

And RNG projects are on track to keep accelerating. The potential for domestic RNG production is estimated to be 10 to 20 times greater than current production.

Mintz says RNG is just one piece of the overall decarbonization strategy — not the entire solution. 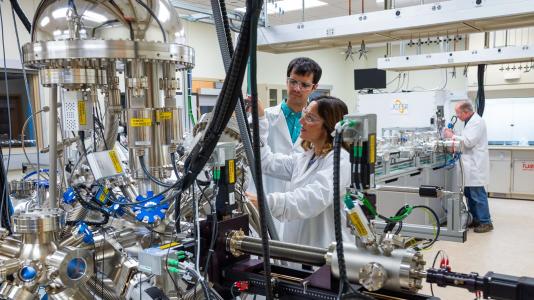