The idea of a nuclear power plant today evokes images of large cooling towers and expansive, warehouse-size buildings. Such facilities generate about a fifth of electricity in the United States without emitting greenhouse gases. A different picture of nuclear energy is emerging, however, in the form of micro-reactors that could fit on the back of a truck or inside a rocket to space. The promise of these micro-reactors is to provide the same reliable, zero-carbon power in remote settings or to support electrical power grid recovery.

Experts at the U.S. Department of Energy’s (DOE) Argonne National Laboratory are developing strategies to bring micro-reactor concepts closer to commercial reality, working together with private industry and federal regulators. A micro-reactor might have a capacity of anywhere from a few kilowatts to 20 megawatts — far less than even the smallest operating U.S. nuclear power plant, which has a capacity of 581 megawatts. The low electricity output allows micro-reactors to have a smaller physical size and reduced costs, which would be enabled through factory manufacturing and design simplification.

Aside from being compact, micro-reactors must be designed to operate safely for many years — perhaps several decades. They can also be self-controllable, operating without the need for a constant human presence. While it’s possible to build such a reactor with today’s technology, it might not have the portability or the efficiency needed to operate on a military base, for example, or in an Arctic community where renewable alternatives such as wind or solar energy are not feasible.

As work proceeds on the design and deployment side, other experts at Argonne are lending technical assistance to regulators in determining the requirements for safety, safeguards and security for micro-reactors. ​“With new reactor designs coming online in the next decades, we are creating a framework to ensure confidence in how these reactors are being built, sited and constructed,” said Andrew Breshears, principal nuclear chemist at Argonne.

Here are a few of the ways Stauff, Breshears and colleagues are moving micro-reactors forward.

Pumping the breaks for low-enriched fuel

Subatomic particles called neutrons enable the fission reaction that creates energy in a reactor. But in order for that to happen reliably, the neutrons need to be slowed down — a process called moderation. Typically, graphite is used for moderation, but graphite ​“adds a lot of weight and takes up a lot of room,” Stauff said. To find an alternative to graphite, Stauff and Yinbin Miao, principal materials scientist, formed a team to develop an advanced moderation module with metal hydrides, compounds in which metal is bonded to hydrogen. Though metal hydrides alone would decompose at the high temperatures within a nuclear reactor, the module employs an innovative, multilayered enclosure that protects the moderator without compromising its performance. More moderation enables the use of low-enriched uranium fuel, which is desirable from a safeguards and security standpoint because it is difficult to weaponize.

Nuclear reactors require cooling, which is typically achieved by pumping a fluid that can transfer the reactor’s heat to the power conversion cycle. A solution developed at Argonne, the Versatile Heat Transfer Module, removes heat from the reactor via a heat pipe — no pumping power needed. ​“It’s just natural evaporation, circulation and recondensation of the fluid inside the heat pipe that cools down the reactor,” Stauff said. ​“It’s a fully passive heat transfer mechanism.” Argonne’s technology, developed by Stauff and Miao’s team, is using a lined and coated envelope of silicon carbide — a crystalline compound of silicon and carbon — and a metal hydride wick filled with a small amount of liquid metal. The design enables exceptionally compact reactor designs while enhancing inherent safety and facilitating autonomous control.

Argonne’s work with HolosGen is focused on a high-temperature gas-cooled mini-reactor designed to fit into a standard 40-foot shipping container, funded in part by DOE’s MEITNER and Gateway for Accelerated Innovation in Nuclear programs. The gas used for this concept, helium, does an excellent job of conveying heat away from the reactor, but it’s notoriously prone to leaks. To address this problem, Argonne researchers have developed a silicon carbide-based coolant sleeve using advanced coating to allow the helium to circulate at a high velocity while remaining fully sealed inside.

The nuclear industry relies on a suite of computer codes to evaluate and model various aspects of a reactor: how the fuel behaves, how high the temperature gets, and a host of other variables that determine safety and efficiency. However, these traditional tools are usually not directly compatible with the unconventional technologies being developed for micro-reactors. As part of the NEAMS program, which is developing modern codes for advanced nuclear energy technologies, Argonne has assembled a team of reactor physics experts to gain experience with micro-reactor modeling problems, identify modeling gaps and demonstrate capabilities to support industry users. Using the Bebop high-performance computing cluster at Argonne’s Laboratory Computing Resource Center, researchers are working to solve complex multi-physics modeling problems that are unique to micro-reactor designs. Stauff and colleagues are also training users in the private sector at companies such as Oklo and Westinghouse to use the codes to accelerate development of their advanced reactor concepts.

Whether a micro-reactor is deployed for charging electric trucks on the highway or in a remote community, the Nuclear Regulatory Commission (NRC) needs to make sure it will operate safely and remain secure. Breshears is leading a multidisciplinary study on a safety-informed domestic safeguards framework for the agency that will be completed this year. The framework will address the many considerations involved when assessing the construction and operation of a mini-reactor. These include questions about how the reactor needs to be managed, what kind of physical protection it might need and how sensitive nuclear materials are handled and accounted for. As with any energy facility, mini-reactors must be hardened to face risks that range from weather events to intruders. ​“Inherently safe from an earthquake doesn’t necessarily mean inherently safe from a disgruntled actor,” Breshears said. ​“We’re accounting for a variety of scenarios in this framework, both for the NRC and for vendors to understand what they’re expected to bring to the table when it comes to domestic safeguards.” 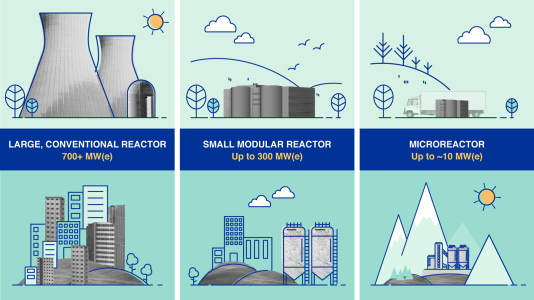