By
Louise Lerner
|
March 6, 2017
When the Deepwater Horizon drilling pipe blew out seven years ago, beginning the worst oil spill in U.S. history, those in charge of the recovery discovered a new wrinkle…

the millions of gallons of oil bubbling from the sea floor weren’t all collecting on the surface where it could be skimmed or burned. Some of it was forming a plume and drifting through the ocean under the surface.

Now, scientists at the U.S. Department of Energy’s (DOE) Argonne National Laboratory have invented a new foam, called Oleo Sponge, that addresses this problem. The material not only easily absorbs oil from water, but is also reusable and can pull dispersed oil from the entire water column—not just the surface.

“The Oleo Sponge offers a set of possibilities that, as far as we know, are unprecedented,” said co-inventor Seth Darling, a scientist with Argonne’s Center for Nanoscale Materials and a fellow of the University of Chicago’s Institute for Molecular Engineering.

We already have a library of molecules that can grab oil, but the problem is how to get them into a useful structure and bind them there permanently.

The scientists started out with common polyurethane foam, used in everything from furniture cushions to home insulation. This foam has lots of nooks and crannies, like an English muffin, which could provide ample surface area to grab oil; but they needed to give the foam a new surface chemistry in order to firmly attach the oil-loving molecules.

After some trial and error, they found a way to adapt the technique to grow an extremely thin layer of metal oxide ​“primer” near the foam’s interior surfaces. This serves as the perfect glue for attaching the oil-loving molecules, which are deposited in a second step; they hold onto the metal oxide layer with one end and reach out to grab oil molecules with the other.

The result is Oleo Sponge, a block of foam that easily adsorbs oil from the water. The material, which looks a bit like an outdoor seat cushion, can be wrung out to be reused—and the oil itself recovered.

At tests at a giant seawater tank in New Jersey called Ohmsett, the National Oil Spill Response Research & Renewable Energy Test Facility, the Oleo Sponge successfully collected diesel and crude oil from both below and on the water surface.

“The material is extremely sturdy. We’ve run dozens to hundreds of tests, wringing it out each time, and we have yet to see it break down at all,” Darling said.

Elam, Darling and the rest of the team are continuing to develop the technology.

“The technique offers enormous flexibility, and can be adapted to other types of cleanup besides oil in seawater. You could attach a different molecule to grab any specific substance you need,” Elam said.

The team is actively looking to commercialize the material, Harvey said; those interested in licensing the technology or collaborating with the laboratory on further development may contact partners@​anl.​gov.

The research was funded by the U.S. Coast Guard and the Bureau of Safety and Environmental Enforcement. The team used resources of the Center for Nanoscale Materials, a DOE Office of Science User Facility, in the development of the material.

How does oil wind up below the surface? 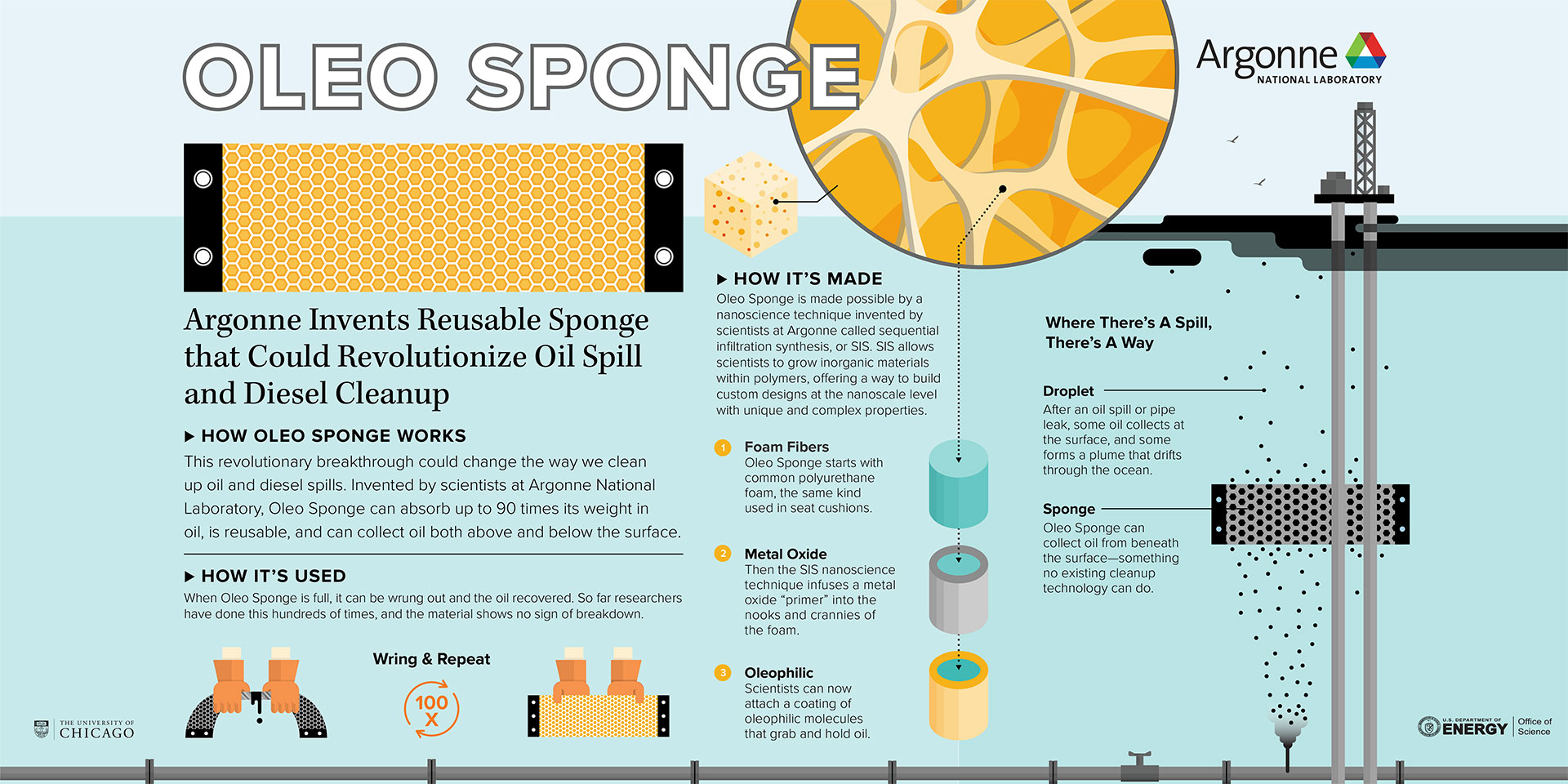 Scientists at the U.S. Department of Energy’s (DOE) Argonne National Laboratory have invented a new foam, called Oleo Sponge, that addresses this problem.