By
Dave Bukey
|
October 6, 2020
Electric semitrucks could revolutionize the transportation industry. But not until a convenient source of electricity is found. Could mini nuclear reactors at rest stops solve this problem?

Driving a newer electric car for the first time can instill the excitement of playing a favorite video game. Everything is sleek, fast and futuristic. That’s an image that every technology firm wants to convey, including the makers of semitrucks, many of which have unveiled plans to electrify their 18-wheelers.

At first glance, electric semitrucks sound like a great idea, leading to cleaner, carbon-free skies. But the largest cross-country 18-wheel truck needs five to 10 times more electricity than an electric car to recharge its battery. And these trucks often need to recharge far from high-power transmission lines. Where will that electricity come from?

A team of engineers at the U.S. Department of Energy’s (DOE) Argonne National Laboratory will tell you the answer is clear — microreactors.

These microreactors, which rely on nuclear fuel and passive safety features, could recharge cross-country semitrucks at thousands of rest stops across the country, say these engineers who have developed a novel way to generate power that links a nuclear reactor — about the size of two home water heaters — to an energy storage system.

“The reactor can operate for more than 10 years and generate direct current power to charge electric semis at rest stops,” said Derek Kultgen, a principal engineer in Argonne’s Nuclear Science and Engineering division, who leads the new project. ​“We expect recharging costs to be far less expensive than fueling a diesel semitruck.”

Nuclear experts have designed small reactors that could generate power in remote areas — e.g., the Arctic, military bases, on spacecraft — for years without refueling or servicing. These designs arise from 20-plus years of DOE research and use mature, proven technologies for nuclear safety.

Indeed, Kultgen’s plan is one of five new projects at the laboratory that are exploring how so-called microreactors can help solve the nation’s energy challenges. The projects combine two of Argonne’s strengths — nuclear research and energy storage.

Yet, this rest stop concept stands out for three reasons.

First, the system is flexible; it adjusts as demand swings when trucks come and go — even as the reactor’s power output remains steady. When the rest stop is empty, the reactor produces power in the form of heat, which is transferred and stored in a separate tank of inert heat-transfer fluid. When trucks crowd the rest stop, the system taps that heated fluid to produce steam, generate electricity and recharge batteries. (To learn more about this, see ​“How this design transfers and stores heat” on the right.)

Second is the rest stop reactor’s safety-forward design; the team chose a special type of nuclear fuel that secures all radioactive material. The fuel is made of Tri-structural ISOtropic (TRISO) pellets, developed from 60 years of research at DOE National Laboratories. The pellets contain low-enriched uranium covered by layers of carbon and ceramics. Those protective layers ensure the reactor’s safety.

Third, the Argonne team aimed to keep the cost of the rest-stop reactor low — under $3,000 per kilowatt-hour for capital costs — by choosing proven, practical approaches. The team, for example, picked a thermal reactor design — the same type that powers all 95 nuclear plants in the U.S. — because of its 70-plus-year track record of safety and reliability. The system, said Kultgen, works at relatively low temperatures (about 700 degrees Fahrenheit) to reduce costs and promote rapid development.

The decision to go with a temperature lower than many advanced designs require came, in part, from Kultgen’s four years of managing Argonne’s Mechanisms Engineering Test Loop (METL) Facility. There, a team of engineers gauge the durability of equipment by dunking it in liquid sodium at 1,200 degrees Fahrenheit for months or years.

Sticking to lower temperatures may sacrifice efficiency for cost and safety, but Kultgen accepts that tradeoff.

“Cost is one of the biggest challenges to constructing and operating a facility to withstand these extreme temperatures,” he said.

To design the system, the team turned to Nicolas Stauff, a principal nuclear engineer who had already designed microreactors for startup companies and the Department of Energy. Stauff used modeling software, including the laboratory’s award-winning System Analysis Module (SAM) Reactor Analysis Code, to pick the best reactor size, fuel amount and heat-transfer fluid type. With these tools, Stauff also designed the reactor core and simulated how the whole system would operate.

At that point, everything clicked. ​“We realized we could put this together,” Kultgen said. ​“The system could be standardized, mass produced on an assembly line and loaded on trucks to ship to installation sites across the country.”

The team has shown that the approach could fill a gap in infrastructure for electric long-haul, 18-wheel trucks. But they stress that much work remains.

“We plan to go much further in the analysis of this reactor,” said Stauff. Over the next year, he plans to examine the tradeoff between the reactor core’s size and its longevity, while exploring the reactor core’s behavior with tools that offer high-fidelity, multi-physics simulations.

Stauff is an expert user of these tools as he leads the microreactor area within the DOE Office of Nuclear Energy’s Nuclear Energy Advanced Modeling and Simulation (NEAMS) program.

How this design transfers and stores heat

Admittedly, the inner workings of any nuclear power plant — big or small — are complex. But the system used to store thermal energy, discussed to the left, is straightforward.

The nuclear reactor core first heats a pool of liquid metal, which boils and turns into vapor. As the vapor moves away from the core, it passively heats a second liquid, designed specifically to transfer heat, via a heat exchanger. That second liquid holds the heat and ultimately converts it to electricity via a steam generator. Meanwhile, as the liquid metal pool cools, it condenses back into a liquid and recirculates back into the reactor core.

“It’s a sealed and robust system,” said Derek Kultgen, a principal mechanical engineer at Argonne. ​“No pressure or outside power or pumps are needed.”

5 ways Argonne scientists are powering ahead on nuclear micro-reactors 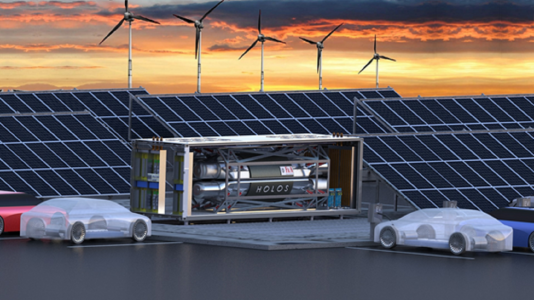