What is climate resilience?

Extreme weather, such as hurricanes, flooding, and drought appear more often these days. Exacerbated by drought, for example, wildfires have increased, burning millions of acres from California to Australia.

Climate resilience is a way to protect ourselves from the effects of extreme climate events — impacts such as rising sea levels, wildfires, erosion, hurricanes, and extreme heat — that can damage the systems that underpin the economy. To do this, scientists start with smart maps to project climate patterns decades into the future. (Weather describes what happens outside over hours or days, while climate explains this behavior in a certain area over longer time periods.)

You may have seen scientists predict changes in average temperature or rainfall. And some scientists go further and predict weather patterns years from now using powerful computers. We call this climate modeling. Scientists use these 3-D models of the earth’s climate system to create maps showing how climate will evolve into the future, and in ways that could impact communities. But we need more detailed maps.

Why? Because the rates and intensity of climate change depend on which specific location one is in, and more detailed maps will help us learn how the climate may change the environment around each city, town, even single buildings. The weather can change from one zip code to the next and so does climate. The sun may be shining on one side of a mountain while a blizzard hits the other side, and these differences will show up as different intensities of climate change if one is in the mountain west or even a moderately sized city.

Scientists at the U.S. Department of Energy’s (DOE) Argonne National Laboratory have created climate maps of the whole United States with grid squares of just 12 kilometers (about 7.5 miles) in size. While some global scale climate models are able to simulate the earth at spatial resolutions of ~3 kilometers, they are currently able to, at best, forecast a single season or year. The Argonne Downscaled Data Archive (ADDA) takes a different approach. It represents North America at a resolution approximately 10 times greater than that of most global models. The ADDA also projects climate over 10-year periods, starting at either the present, middle, and end of the 21st century.  As a result, the ADDA represents some of the most detailed maps of their kind that scientists can use to project risks to our society.

The entire climate dataset holds 700 terabytes of information. And Argonne’s supercomputer can draw in minutes what would take your laptop 3,000 years to draw.

By looking many years ahead, we can fine tune how we plan for the future. If we were concerned about wildfires, we could identify those spots that are likely to be at greater risk of fires — those with low humidity, dry soil, and high winds — and take action to protect the communities and assets in these places. Or we could create buffer spaces between buildings and fires, which would help lower risks.

Since 2019, Argonne’s climate scientists have helped others create their own plans:

Climate resilience is a way to plan to protect us from a changing climate. It helps experts project the impact of extreme climate events that can damage natural systems, agriculture, utilities, facilities and networks via clear or hidden connections. By planning correctly, we can avoid disruptions to natural habitats and to communities as the frequency and intensity of droughts, wildfires, blizzards, and heat waves change in the future.

During a heat wave, for example, air conditioning spikes and the increased electricity demand can overload power lines and transformers. Heat waves can also weaken transportation networks. Roads and railroad tracks buckle. Health and safety are also concerns. Heat waves may cause illness for those who are vulnerable, overwhelming hospitals. Without electricity, supply chains clog. Agricultural productivity may decrease because of extreme heat and drought, and biodiversity shrinks as species are threatened by the changing natural environment.

The goal is to spot these possibilities early and plan and design around them. 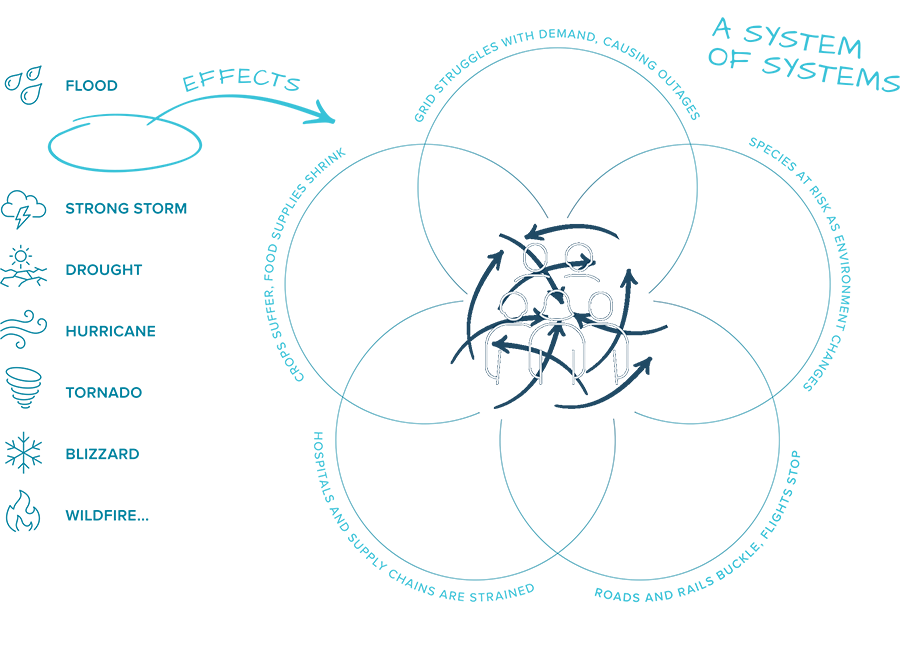