What is a battery?

Batteries power our lives by transforming energy from one type to another.

Lithium-ion batteries that power cell phones, for example, typically consist of a cathode made of cobalt, manganese, and nickel oxides and an anode made out of graphite, the same material found in many pencils. The cathode and anode store the lithium.

When a lithium-ion battery is turned on, positively charged particles of lithium (ions) move through the electrolyte from the anode to the cathode. Chemical reactions occur that generate electrons and convert stored chemical energy in the battery to electrical current.

When you plug in your cell phone to charge the lithium-ion battery, the chemical reactions go in reverse: the lithium ions move back from the cathode to the anode.

As long as lithium ions shuttle back and forth between the anode and cathode, there is a constant flow of electrons. This provides the energy to keep your devices running. Since this cycle can be repeated hundreds of times, this type of battery is rechargeable.

Argonne is recognized as a global leader in battery science and technology. Over the past sixty years, the lab’s pivotal discoveries have strengthened the U.S. battery manufacturing industry, aided the transition of the U.S. automotive fleet toward plug-in hybrid and electric vehicles, and enabled greater use of renewable energy, such as wind and solar power.

The lab’s research spans every aspect of battery development, from the breakthrough fundamental science of the Argonne-led Joint Center for Energy Storage Research, a DOE Energy Innovation Hub, to the Argonne Collaborative Center for Energy Storage Science, a cross-lab collective of scientists and engineers that solves complex battery problems through multidisciplinary research.

Argonne researchers are also exploring how to accelerate the recycling of lithium-ion batteries through the DOE’s ReCell Center, a collaboration led by Argonne that includes the National Renewable Energy Laboratory, Oak Ridge National Laboratory, as well as Worcester Polytechnic Institute, University of California at San Diego and Michigan Technological University.

For another take on ​“Batteries 101,” check out DOE Explains.

A lithium-ion battery is a type of rechargeable battery. It has four key parts:

When the battery is in use, positively charged particles of lithium (ions) move through the electrolyte from the anode to cathode. Chemical reactions occur that generate electrons and convert stored chemical energy in the battery to electrical current.

When the battery is charging, the chemical reactions go in reverse: the lithium ions move back from the cathode to the anode. 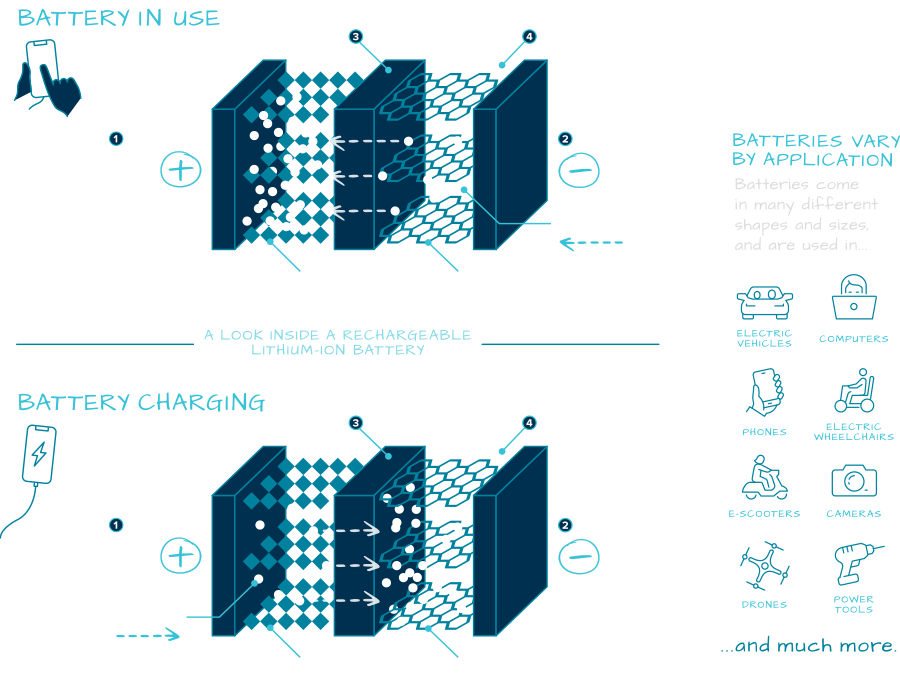