What is an X-ray light source?

To develop treatments to combat deadly infectious diseases, we need to understand the organisms that cause them. To design the next generation of electric cars, we need to create better, longer-lasting batteries to power them. To build more efficient, safer airplane engines, we need stronger, more durable materials that won’t crack under stress.

To do all of those things, and more, a powerful X-ray light source is needed. X-rays are light, but they are not the visible light one typically thinks of when you hear the word. You may be familiar with the X-ray machines dentists use to take pictures of the insides of teeth. A light source such as the Advanced Photon Source (APS), a U.S. Department of Energy (DOE) Office of Science User Facility located at DOE’s Argonne National Laboratory, generates similar X-ray light, but a billion times brighter.

What can be done with a light that bright? The APS works like a giant microscope, but unlike visible light, X-rays are penetrating, enabling scientists to see deep inside materials. The X-ray beams can be focused so tightly that scientists can use them to ​“see” what happens inside a battery during use, for example, so more energy-efficient versions can be developed.

The APS, and other light sources around the world, have been improving our lives for decades. The technology that powers them – particle acceleration – has been around since the 1920s.

At the heart of the APS is a storage ring, about two-thirds of a mile around. It’s so large you could fit a baseball stadium inside it. Its job is to circulate particles called electrons with high precision and at a consistent speed very near to the speed of light. Electrons travel around this ring many billions of times a day, releasing bright light at each bend in the track. The APS sends that light to experiment stations located all around the ring, where different types of science experiments are performed.

The APS is a national user facility, meaning this resource is made available to scientists worldwide. There is no charge for scientists to use it, provided that their data is released publicly. More than 5,500 scientists from around the world use the APS annually to study a wide variety of things, from new ways to combat greenhouse gases to new methods of fortifying our roads and bridges.

The APS has been a world-leading X-ray light source since it was first built in the 1990s, and its future is about to get a lot brighter. A massive upgrade will replace the current storage ring with one that will generate X-rays up to 500 times brighter than those produced today, enabling more experiments and innovations that will improve our lives.  Along with other light sources around the world, the APS will continue to enable scientists to keep us healthier, keep us safer and improve our knowledge of the world around us.

A powerful light source such as the Advanced Photon Source (APS) is similar to the X-ray machines dentists use, except the light it creates is a billion times brighter. 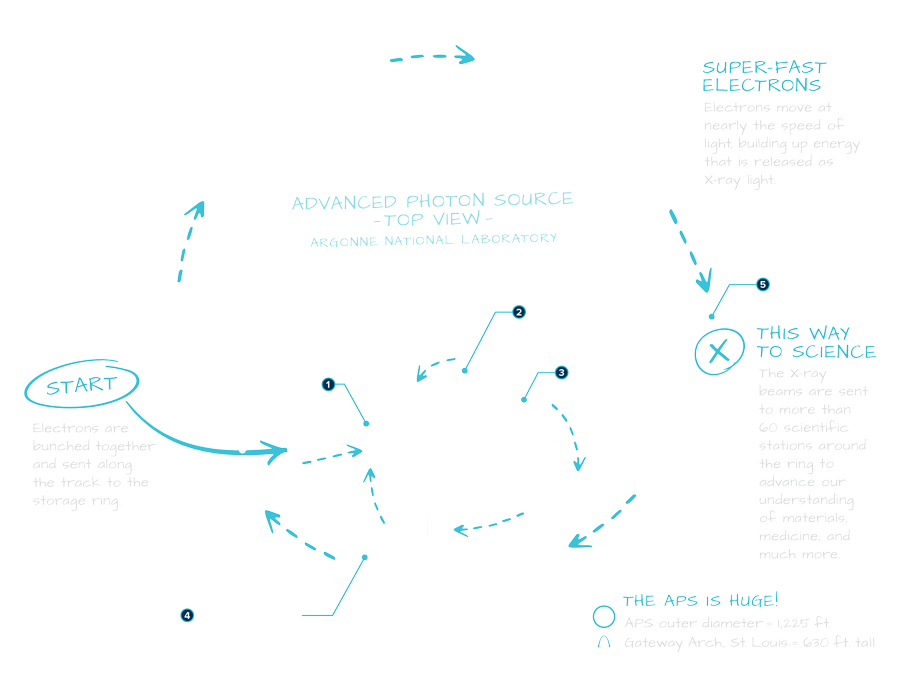