How can you accurately predict how much it will cost to build a new nuclear power plant? Nuclear scientists at the U.S. Department of Energy’s (DOE) Argonne National Laboratory are working to provide answers to this question. They have developed a new algorithm for estimating the capital cost of building advanced nuclear reactor designs.

About 449 nuclear reactors currently operate worldwide, serving a portion of the world’s energy needs. However, more than 1.6 billion people across the globe still lack access to electricity and, according to the World Nuclear Association, global demand for energy is projected to rise by 50 percent by 2040.

Nuclear power plants currently generate an estimated 20 percent of our nation’s electricity; with nearly 100 reactors, the United States leads other nations in the number of reactors in operation.

According to experts, nuclear energy is the only carbon-free power in existence that can satisfy demand at the scale required by cities and factories. However, the broad array of available energy sources — fossil fuels, solar, hydropower and wind, to name a few — creates stiff competition in the marketplace. Opponents of nuclear energy often cite high construction costs and cost overruns as reasons to discourage the construction of additional nuclear power plants.

The new tool allows researchers to ​“focus on specific components of the cost drivers and ask, ​‘How can I reduce that cost?’ The ability to do that will help create a reasonable and appropriate cost estimate and maximize the effect of research dollars dedicated to reducing overall costs.” — Temi Taiwo, program manager in Argonne’s Nuclear Science and Engineering division

To understand better the cost of nuclear systems and what drives those costs, Argonne scientist Francesco Ganda has created a method for estimating the cost of building nuclear energy systems, including nuclear reactors. A report coauthored with T.K. Kim and Temi Taiwo, two colleagues in the laboratory’s Nuclear Science and Engineering division, outlines the details of the approach.

During the ​“golden era” of nuclear reactor innovation in the United States (the 1950s and 1960s), the federal government heavily funded R&D to enable the country to compete with the then-USSR in scientific discovery. This effort enabled the accumulation of knowledge that formed the technological foundation for building the current operating fleet between the late 1960s and the mid-1990s. However, because reactor design has seen significant advances since the end of that era, accurately projecting building costs today is difficult.

As Kim observed, ​“We have had more than a 20-year gap in building nuclear power plants in the United States.”

Because of this hiatus, the costs associated with building a plant today aren’t readily or easily discernible, Kim said. ​“That’s a big issue and a big problem, because an accurate cost estimation is an important factor in planning a multi-billion-dollar, multi-year project like a nuclear plant.”

The algorithm developed by Ganda and his colleagues provides a valuable tool, said Taiwo, that allows users to ​“focus on specific components of the cost drivers and ask, ​‘How can I reduce that cost?’ The ability to do that will help create a reasonable and appropriate cost estimate and maximize the effect of research dollars dedicated to reducing overall costs.”

Formulating the algorithm required a thorough examination of many facets of the nuclear industry, including understanding the reasons for the cost overruns observed historically for several of the U.S. nuclear power plants, said Ganda. ​“For this work, we studied the main drivers of cost, focusing on the most expensive. At this point, the algorithm considers the 30 most expensive components of the capital cost, which contribute more than 80 percent of the direct costs of building a pressurized water reactor. However, we have plans to expand the set of components beyond that, in order to increase the algorithm’s fidelity.”

“By having a tool like this algorithm, we are able to identify which cost components are more (or less) expensive, and by how much. This potentially provides insight into the cost drivers of this advanced technology.”

Although Ganda cautions that more work remains to be done on the algorithm, a comprehensive report is now available in the public domain. Ganda also will present a paper announcing the algorithm in September at the 2018 Pacific Basin Nuclear Conference in San Francisco. Organized by the American Nuclear Society, this event brings together nuclear scientists and government officials from around the globe, particularly those from Pacific Basin nations.

Funding for this project comes from the DOE Office of Nuclear Energy’s (NE) Nuclear Technology Research and Development (NTRD) office.

The mission of DOE NE is to advance nuclear power to meet the nation’s energy, environmental, and national security needs. Under the guidance of three research objectives, NE resolves barriers to technical, cost, safety, security, and proliferation resistance through early-stage research, development, and demonstration to:

For more information, visit the Office of Nuclear Energy website. 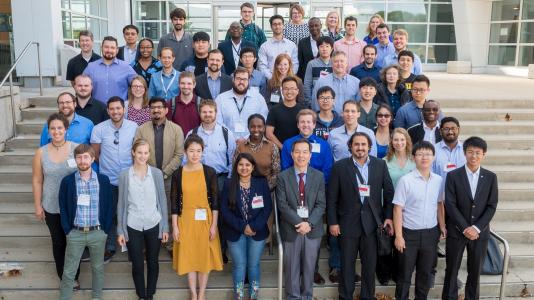