By
Savannah Mitchem
|
January 24, 2019
Equipping the next generation for a technological revolution

As the rate of technological development accelerates, scientific and technological fields are rapidly evolving, merging and growing. Changes in the methods and tools that scientists and engineers use — demonstrated by an increased focus on data science, machine learning and other emerging fields — make the need for capable STEM problem solvers urgent.

How do we prepare the next generation of scientists and engineers for future success when the problems they will solve — and the technologies they will use to solve them — have yet to be defined and developed?

“It’s hard to imagine problems we might be solving in 10 to 15 years, but at Argonne, we are looking at the skills and dispositions that make researchers successful now and providing students with opportunities to develop those in themselves.” — Meridith Bruozas, Educational Programs and Outreach

Meridith Bruozas, the Educational Programs and Outreach manager at the Department of Energy’s (DOE) Argonne National Laboratory, recently responded to this question with a keynote presentation to the Illinois Association of School Business Officials at TechCon: Technology and Financial Issues for the 21st Century. The talk, titled ​“Preparing the next generation for a future unknown,” addressed how Argonne is connecting today’s students to the laboratory’s world-class research and preparing them for futures in STEM.

“It’s hard to imagine problems we might be solving in 10 to 15 years,” said Bruozas, ​“but at Argonne, we are looking at the skills and dispositions that make researchers successful now and providing students with opportunities to develop those in themselves.”

One part of the mission Bruozos describes is preparing students for the increasingly interdisciplinary nature of modern research. ​“Today’s successful STEM problem solvers not only have a solid knowledge base,” said Bruozas, ​“but they are able to interweave their understandings across complex, multi-disciplinary problems.”

“In these modern research projects, we see creative thinkers who can connect and communicate with each other effectively,” said Bruozas, ​“and we also see that the lines separating the disciplines are beginning to blur.”

For example, in scientific and engineering professions, technology is not its own subject, but rather a tool that helps scientists and engineers in any field. ​“We want to make sure that curricula integrate the use of technology into disciplinary spaces to more closely replicate how research is done at a place like a national lab,” said Bruozas.

One of the focuses of Argonne’s Educational Programs and Outreach is to afford students the opportunity to develop skills in computer science and data science. Argonne offers programs for students from middle school to graduate school that increase awareness, build knowledge and teach applications of computer technology and programming.

“Computational thinking and data science show up in everything we do onsite,” said Bruozas. ​“Whether you’re collecting, visualizing or analyzing the data, you have to be able to break down a problem in terms of how a computer can solve it.”

Programs at the laboratory — such as internships, ​“CodeGirls at Argonne” and high school data visualization and coding camps — feature data-infused, problem-based learning to show students not only how to code, but why we code. In 2018, Argonne connected with over 30,000 students and their families through these programs, engaging them in science and forging STEM career pathways.

In addition to providing programs on-site, Argonne also helps to incorporate computational thinking in the classroom. Every December, Argonne scientists participate in Computer Science Week and the Worldwide Hour of Code Initiative, visiting schools in the Chicagoland area and introducing students to programming.

“We want students coming out of school as curious, ambitious team players that can help us solve the scientific problems of the future,” said Bruozas. 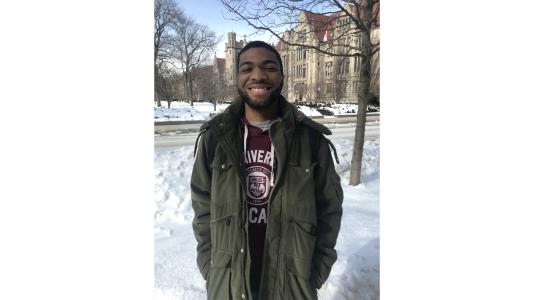