By
Louise Lerner, University of Chicago
|
October 25, 2018
National labs, UChicago to create one of the country’s longest fiber-optic links to ​“teleport” information

As the number of hacks and security breaches rapidly climbs, scientists say there may be a way to make a truly unhackable network by using the laws of quantum physics.

To explore the concept, scientists are creating a network in the Chicago area that taps the principles of quantum physics to send information. Such a link could one day form the basis for a truly secure network, which would have wide-ranging impact on communications, computing and national security. The federal government estimates that malicious cyber activity cost the U.S. economy between $57 billion and $109 billion in 2016.

The quantum network, supported by the U.S. Department of Energy (DOE), will stretch between the DOE’s Argonne National Laboratory and Fermi National Acceleratory Laboratory, a connection that is expected to be among the longest in the world to send secure information using quantum physics. The experiment will ​“teleport” information across a 30-mile distance, as particles change their quantum states instantaneously rather than traveling between two points.

“This project launches the construction of a communications network based on the quantum states of matter, offering a fundamentally new way to create and securely send information,” said David Awschalom, an Argonne scientist and the Liew Family Professor of Molecular Engineering at the University of Chicago, who is principal investigator of the project. ​“We will build a national testbed to develop the science for engineering quantum systems and explore the properties of quantum entanglement, a phenomenon that’s fascinated scientists and the general public alike.”

As the result of a growing focus on quantum research among scientists at Argonne, Fermilab and UChicago, the three institutions have formed a partnership, the Chicago Quantum Exchange, involving 70 scientists and engineers and bringing together the intellectual talents, research capabilities and engineering power of the three affiliated institutions.

“This is the first time anyone has even planned to carry out a quantum network like this: a permanent, functioning quantum teleportation network at long distances in the United States,” said Fermilab Deputy Director and Chief Research Officer Joe Lykken. ​“We want to demonstrate the enabling quantum technology. And we want to capitalize on our expertise to pave the way for others to create their own networks. Decades ago, building something like this would have been just a dream. But we’re doing it now, and soon others will be able to.”

The strange laws of quantum

The new communications network taps the strange laws of quantum mechanics, which govern the interactions of the smallest particles.

Part of the interest in the development of quantum systems stems from a rule of quantum mechanics that states that measuring a quantum particle alters its state. Scientists believe that a quantum system could be virtually unhackable because, if someone tries to look at a transmission, it would be disturbed, the information destroyed, and the senders alerted.

The quantum systems being developed at Fermilab and Argonne will eventually tap an underground link first built in the 1980s to test data transfer. The optical fiber cables are still undisturbed and functional, scientists said.

The way the quantum network works is by ​“entangling” particles, another quirk of quantum mechanics that says you can link two (or more) particles so that they are in a shared state—and whatever happens to one affects the other, even if they’re miles apart at the time.

So far, systems like these have been tested in laboratories and at small scales. Even a few kilometers of distance have been a challenge, since entangled particles must not interact in any way with their environment, and scientists must overcome any loss of photons emitted by the particles and precisely coordinate the timing of their transmissions.

“Performing information teleportation across real-world distances many miles apart allows us to identify practical problems involved in operating a quantum network – what are the technological challenges, how secure is the communication, and what are the limits to transporting information in this manner,” Awschalom said.

“Quantum testbeds of similar scale exist around the world. But most of them rely on entangled photons – particles of light – to teleport information. Our testbed is unique in that, for the first time, we push towards an all solid-state architecture where trapped quantum particles in solids are used as information carriers,” said Tian Zhong, assistant professor of molecular engineering at University of Chicago and scientist at Argonne, who is a co-principal investigator of the project.

At Fermilab, Shang-Yi Ch’en Professor of Physics at Caltech Maria Spiropulu is currently building an onsite quantum network with partners AT&T and Jet Propulsion Laboratory. They began this effort in 2017, and one year later, Spiropulu and her team have deployed the network within Fermilab and are working on developing improved devices for long-distance entanglement distribution. Their goal is to eventually extend that network to form part of the larger Fermilab-Argonne link.

“Networking quantum devices is important for scaling quantum computation and architecting hybrid communication systems towards a quantum-enhanced internet,” Spiropulu said. ​“It will take deliberate collaboration between the government research laboratories, academia, industry and foundations to get there. The Chicago Quantum Exchange program will catalyze progress in all these areas.”

On Nov. 8-9, scientists from Argonne, Fermilab and UChicago will gather with industry, academic and government leaders in the field for the Chicago Quantum Summit, a program exploring the future of quantum computing and information science.

A public event in the city of Chicago titled ​“Quantum Engineering: the Next Technical Arms Race,” featuring a conversation between Awschalom and Hartmut Neven, director of the Google Quantum Artificial Intelligence Lab, will be held as part of the summit.

Work on developing the Argonne-Fermilab quantum network is supported by the DOE Office of Science.

What they did this summer: perspectives from five Open Quantum Initiative undergraduate fellows 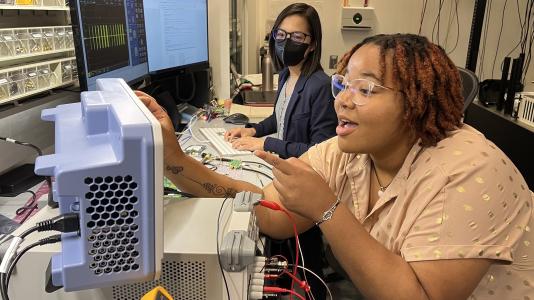