By
Andre Salles
|
May 18, 2020
Using two flat-top diamonds and a lot of pressure, scientists have forced a magnetic crystal into a spin liquid state, which may lead to insights into high-temperature superconductivity and quantum computing.

It sounds like a riddle: What do you get if you take two small diamonds, put a small magnetic crystal between them and squeeze them together very slowly?

The answer is a magnetic liquid, which seems counterintuitive. Liquids become solids under pressure, but not generally the other way around. But this unusual pivotal discovery, unveiled by a team of researchers working at the Advanced Photon Source (APS), a U.S. Department of Energy (DOE) Office of Science User Facility at DOE’s Argonne National Laboratory, may provide scientists with new insight into high-temperature superconductivity and quantum computing.

But no one really knows how high-temperature superconductors achieve this state. This knowledge is needed to increase these materials’ operating temperature towards ambient temperature, something that would be required for full-scale implementation of superconductors in energy-conserving power grids.

One idea put forth in 1987 by the late theorist Phil Anderson of Princeton University involves putting materials into a quantum spin liquid state, which Anderson proposed could lead to high-temperature superconductivity. The key is the spins of the electrons in each of the material’s atoms, which under certain conditions can be nudged into a state where they become ​“frustrated” and unable to arrange themselves into an ordered pattern.

To relieve this frustration, electron spin directions fluctuate in time, only aligning with neighboring spins for short periods of time, like a liquid. It is these fluctuations that may aid in the electron pair formation needed for high-temperature superconductivity.

Pressure provides a way to ​“tune” the separation between electron spins and drive a magnet into a frustrated state where magnetism goes away at a certain pressure and a spin liquid emerges, according to Daniel Haskel, the physicist and group leader in Argonne’s X-ray Science Division (XSD) who led a research team through a series of experiments at the APS to do just that. The team included Argonne assistant physicist Gilberto Fabbris and physicists Jong-Woo Kim and Jung Ho Kim, all of XSD.

Haskel is careful to say that his team’s results, recently published in Physical Review Letters, do not conclusively demonstrate the quantum nature of the spin liquid state, in which the atomic spins would continue to move even at absolute zero temperatures — more experiments would be needed to confirm that.

If this is a quantum spin liquid, Haskel said, the ability to create one by this method would have wide implications.

So what did the team do, and how did they do it? That brings us back to the diamonds, part of a unique experimental setup at the APS. Researchers used two diamond anvils, cut in a similar way to what you’d see in jewelry stores, with a wide base and a narrower, flat edge. They positioned the smaller flat edges together, inserted a sample of magnetic material (in this case a strontium-iridium alloy) between them, and pushed.

“The idea is that as you pressurize it, it brings the atoms closer together,” said Fabbris. ​“And since we can do that slowly, we can do that continuously, and we can measure the properties of the sample as we go up in pressure.”

When Fabbris says that pressure was applied slowly, he isn’t kidding — each one of these experiments took about a week, he said, using a sample of about 100 microns in diameter, or about the width of a thin sheet of paper. Since researchers didn’t know at what pressure magnetism would disappear, they had to carefully measure with each very slight increase.

And see it disappear they did, at around 20 gigapascals — equivalent to 200,000 atmospheres, or about 200 times more pressure than can be found at the bottom of the Mariana Trench in the Pacific Ocean, the deepest trench on Earth. The spins of the electrons remained correlated over short distances, like a liquid, but remained disordered even at temperatures as low as 1.5 Kelvin (−457 degrees Fahrenheit).

The trick, Haskel said — and the key to creating a spin liquid state — was to preserve the crystalline order and symmetry of the atomic arrangement, since the unwanted effect of random disorder in atomic positions would have led to a different magnetic state, one without the unique properties of the spin liquid state. Haskel likens the electron spins to neighbors on a city block — as they get closer, they all want to make each other happy, changing their spin direction to match their neighbors’. The goal is to get them so close together that they cannot possibly keep all of their neighbors happy, thereby ​“frustrating” their spin interactions, while still maintaining the structure of the city block.

The research team used the intense X-ray imaging capabilities of the APS to measure the magnetism of the sample, and according to Haskel and Fabbris, the APS is the only facility in the United States where such an experiment could be done. In particular, Fabbris said, the ability to focus in on one type of atom, ignoring all others, was crucial.

“The samples are very small, and if you try to measure magnetism with other techniques in a university lab, you will pick up the magnetic signal from components in the diamond anvil cell,” Fabbris said. ​“The measurements we did are impossible without a light source like the APS. It is uniquely capable of this.”

Now that the team has achieved a spin liquid state, what’s next? More experimentation is needed to see if a quantum spin liquid has been created. Future experiments will involve probing the nature of spin dynamics and correlations more directly in the spin liquid state. But the recent results, Haskel said, provide a path for realizing these elusive quantum states, one that could lead to new insights into superconductivity and quantum information sciences.

Haskel also pointed forward to the APS Upgrade, a massive project that will see the instrument’s brightness increased up to 1,000 times. This, he said, will allow for much deeper probes into these fascinating states of matter.

“It’s up to anyone’s imagination which surprising quantum mechanical effects are waiting to be discovered,” he said.

Argonne quantum research may reshape how we sense and relay data

The smallest bits of matter and energy are the building blocks of a radically new paradigm for sensing and relaying information.
November 29, 2021 | Computer Science and Engineering, Theoretical Computer Science, Quantum Mechanics 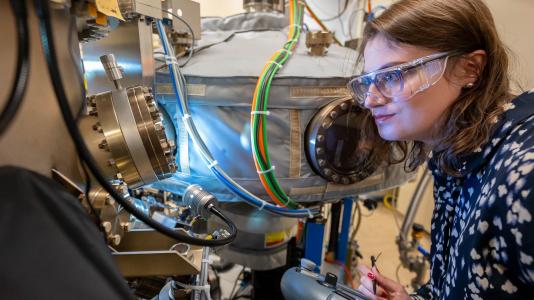