By
Jared Sagoff
|
September 13, 2013
The outlet in your living room doesn’t know a lot—yet.

Unaware of whether they are drawing power from wind, solar, gas, or coal plants, the electrical lines that bring us power in many ways still resemble the chaotic, tangled, unidirectional network that has been in place for a century.

With new and better electronic communication technologies, scientists and engineers from around the country have begun to discuss its replacement: a more adaptable, efficient, reliable, and responsive national electrical network called the ​“smart grid.”

“Ideally, the grid of the future should be one that gives the consumer as much flexibility as possible,” said Argonne energy systems analyst Guenter Conzelmann.

Conzelmann and his colleagues at Argonne have started an initiative to develop better and more powerful modeling capabilities to help us improve how electricity is generated and distributed.

“There are many positive changes to the grid that we have already started to see, such as some families using their own small wind turbines or solar panels to generate power, and this will only continue to spread,” Conzelmann said. As consumers start generating their own energy, sometimes in significant quantities, utilities and electrical engineers have begun an ambitious restructuring of the grid from the bottom up, said Argonne power grid program director Mark Petri.

“The task we’re charged with doing is closer to reconstructive surgery than a mere facelift,” he said.

On one hand, as computing and algorithms get better and more available, researchers have been able to build intricate simulation models that give utilities a much clearer picture of the grid—which they can use to make the grid run more efficiently and reliably.

On the other hand, operators have to figure out how to integrate new breakthroughs in renewables and technology into a network more than a century old, and whose reliability we’ve come to depend on for everything from traffic lights to toast.

Improving the grid also means protecting its vulnerabilities. ​“A national smart grid would represent one of the biggest and most complex networks in the world—one in which even a rogue washing machine might be able to start problems if we didn’t have safeguards,” Conzelmann said.

Everyone suffers from the inability of the current grid to respond quickly and nimbly to changes in demand. That’s one of the big changes that will likely take place in the coming five or 10 years.

Talking about ​“the grid” as it currently exists is something of a misnomer. There are actually several different electrical grids separated around the country by region: one that spreads from the heartland to the East Coast, one for the West Coast and Rockies, and a smaller one for most of Texas. Each of these ​“grids” contains not only large-scale power plants (like nuclear and gas plants) and end-line consumers, but also smaller installations for on-site generation, as well as the entire distribution and transmission infrastructure.

But even taking that approach looks at only half the picture. ​“In order to bring about the kind of transformation we envision, we need to face both scientific and economic questions at the same time,” Petri said. ​“In an ideal situation, we’d be able to provide, well in advance, information to the markets so that companies can predict how much power their customers are going to need and how much electricity will be available. But the current grid can’t do that without sizeable uncertainties.”

Argonne scientists have already started an effort to improve forecasting for wind and solar power, both of which are obviously highly contingent on meteorology. Solar forecasting in particular is in its infancy—the difference between a mostly cloudy and a mostly sunny day can result in an output prediction error of more than 50%. Developing a more robust solar or wind model requires rapidly analyzing tremendous amounts of data, and researchers have only just begun to put together the initial pieces of a comprehensive real-time model.

The grid is complex enough that its future will be shaped by the growth of several different components, according to Petri. ​“The evolution of the grid includes the simultaneous evolution of all the pieces of it,” he said. ​“Consumer behavior is going to change, electric vehicles are going to come on the market, coal power plants are retiring and natural gas-plants are replacing them, and more and more renewable energy is going to come online. How do you understand the behavior of the whole system, how do you manage it, how do you respond to new kind of threats like climate change and terrorism?”

It seems only fitting that some of the best work on the fledgling smart grid is being done by one of the Department of Energy’s brightest young stars. Victor Zavala started his career as a chemical engineer, but has emerged as one of the United States’ top computational mathematicians in the power grid domain.

Last year, Zavala received an Early Career Award for his work at Argonne to improve the efficiency of the power grid and to understand the limits of its flexibility. This is no easy task. ​“The complexity of the grid is such that it pushes the status quo of mathematics and computer science,” he said. ​“It’s no longer enough to look at averages of power flows and demands every hour; with the advent of renewable power and electric cars, now we have to take snapshots every five minutes or less. This generates a massive amount of data and adds significant source of uncertainty that the grid has never seen before.”

While researchers have devised effective and accurate methods to forecast demand for electricity, the real challenge from a computational standpoint lies in changing the nature of the real-time operation of the grid. ​“Operators need to change their way of thinking, which tends to be reactive instead of proactive,” Zavala said.

“In order to make power flow smoothly, we have to be immediately aware of problems and possible scenarios within the system,” Petri added.

Although new supercomputers like Argonne’s IBM Blue Gene/Q and highly efficient algorithms have given scientists a new window into complicated grid dynamics, the problem of uncertainty has made Zavala and his colleagues change their approach to the most serious problems. ​“We’re focusing much more on taking a probabilistic attitude when we’re dealing with forecasting,” he said. ​“At a certain point there’s no real way of making absolute statements of what’s going to occur, so we have to prepare for multiple outcomes using limited information.”

Since June, the number of smart meters installed at homes and businesses has doubled to 10 million meters nationwide. The Department of Energy’s goal is to install an additional 5.5 million by 2015.

Unfortunately, making decisions about how much power to draw from any particular plant is not always as easy as just turning on a switch. Certain types of plants, especially coal and nuclear, are all-or-nothing—bringing them on- or off-line involves significant cost. This process, called ​“ramping up” or ​“ramping down,” takes a great deal of time so flipping the switch is not something to be done lightly, given the uncertainties in other generation sources and in consumer demand.

“Grid operators still don’t yet have a good way to account for the costs of ramping,” Zavala said.

The inelasticity of these parts of the grid causes unpredictable price spikes. The volatility in the power market creates unwelcome uncertainty for everyone in the chain, from power plant operators to distributors to consumers. ​“There’s a huge inefficiency here that is crying out to be fixed,” Petri said. ​“Everyone suffers from the inability of the current grid to respond quickly and nimbly to changes in demand, and that’s one of the big changes that will likely take place in the coming five or 10 years.”

The grid’s inflexibility stems in large part from the fact that scientists have yet to discover a cost-effective method to store a lot of electricity at once. Currently, the best we have is pumped-storage hydropower—pumping a lot of water to a higher elevation with electricity, then releasing it through a hydroelectric plant to get that electricity back when needed—but that only works in places with the right geography. Most power has to be consumed as soon as it’s generated, which is inefficient and limits how much renewable energy we can use.

“One of the major obstacles confronting solar is that you can generate a lot of energy on a sunny day, but you can’t keep that power around for nighttime or a cloudy day,” Conzelmann said.

Until there’s a breakthrough in grid storage technology, an unexpected new resource could be an initial step in the grid’s evolution. Plug-in hybrid electric vehicles like the Chevrolet Volt and the Nissan Leaf could give consumers a way of drawing power from the grid as well as feeding energy back. It’s a bit like having thousands of car-sized batteries stored around the country in garages.

“Using cars as a form of grid storage is an intriguing idea because it allows individuals to buy and sell power to each other, but we’re still years away from having enough capacity to make a real dent in the problem,” Zavala said.

Automobiles can offer another benefit: they alleviate the problem of ramping, as power can be drawn from or fed into car batteries on a minute-to-minute basis.

Although nowhere near enough PHEVs have yet been sold to make this a realistic solution today, improvements in battery technology will hopefully lead to cost reductions that will make plug-in cars more economically competitive with gasoline engines.

Zavala predicts that as it evolves, the new grid will progressively decentralize how power is generated and used. Because solar and wind installations have lower capacity but greater flexibility than coal and nuclear plants, they are ideal for the creation of ​“microgrids”—small power networks to supply surrounding neighborhoods instead of bigger cities.

“The microgrid approach has the potential to give consumers vastly more flexibility, and grid operators can still treat them as a single individual unit,” Conzelmann said. ​“We’re getting a chance to rewrite the rules for how we generate and distribute electricity.”

Petri is similarly optimistic. ​“The day is not too far off when we have a more responsive, adaptable, and secure network that easily incorporates new energy resources and technologies,” he said.

The U.S. Department of Energy’s Office of Science and the Office of Energy Efficiency and Renewable Energy support grid research at Argonne.

This article was published in the summer 2013 issue of Argonne Now, the laboratory science magazine. 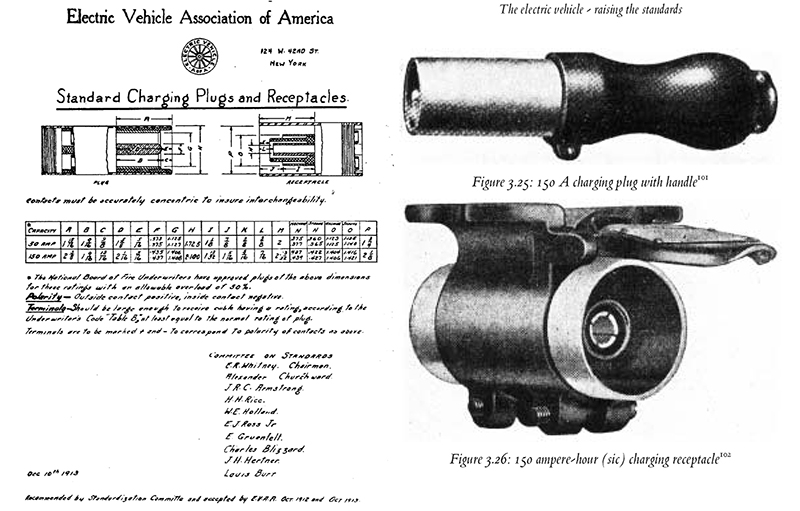 Via smart grid technology, you could plug your car and your home appliances into the electric outlet to ​“talk” with electricity suppliers to arrange the most convenient or cheapest way to power your home. Manufacturers are working on a standard plug for the home hub, cars, and appliances. But it turns out that American manufacturers already agreed on a standardized electric vehicle plug—in 1913! In the early days of cars, electric vehicles seemed a likely competitor for gasoline-powered engines and 30,000 were on the road; thus the plug seen here, complete with wooden handle.