By
Beth Burmahl
|
January 18, 2022
The U.S. Department of Energy’s Office of Nuclear Energy has recently selected three Argonne scientists to principal roles in ushering in the next generation of nuclear reactors that could fill a crucial energy niche.

For decades, scientists at the U.S. Department of Energy’s (DOE) Argonne National Laboratory have led the way in designing the next generation of safer, cheaper and more efficient advanced nuclear reactors that could be key to meeting the world’s future clean energy needs.

In recognition of Argonne’s leadership, the Reactor Fleet and Advanced Reactor Deployment office within DOE’s Office of Nuclear Energy has recently selected three Argonne scientists, Robert Hill, Bo Feng and Meimei Li, to principal roles in ushering in the next generation of nuclear reactors that could fill a crucial energy niche.

“Argonne is at the center of fast reactor development. Most of the Generation IV advanced reactor systems have origins in designs developed by Argonne scientists — including those now perfected by other national laboratories and countries.” Temitope Taiwo, director of Argonne’s Nuclear Science and Engineering division

Hill, who leads Argonne’s Advanced Nuclear Energy Research and Development within the division of Nuclear Science and Engineering (NSE), was named technical director of the Generation IV International Forum (GIF), the lead international organization dedicated to cooperative research and development of next-generation nuclear energy systems. Hill, who assumed the role on Jan. 1, has served in other GIF leadership positions since its inception in 2000.

In 34 years at Argonne, Hill has contributed groundbreaking research on fast reactor technology and served as the DOE Fast Reactor Program national technical director from 2006 through 2021.

Feng, NSE group manager of Reactor and Fuel Cycle Analysis, was promoted to the role of DOE Fast Reactor Program national technical director. Feng, who assumed the role in December, has more than a decade of experience in designing and analyzing advanced reactor systems and fuel cycle applications. As part of this role, he was also named a member of GIF’s Sodium Fast Reactor System Steering Committee.

Argonne has played a key role in the growth and direction of GIF, an international collaboration of 14 countries including the U.S., Japan, France, South Korea, Russia and China. All countries, which are at varying stages of nuclear reactor development, are united in the goal of reaching commercial deployment of the most advanced nuclear energy systems beginning in 2030.

The U.S. has been selected to lead the GIF initiative for a three-year term starting in 2022, which is a critical time for the future of advanced nuclear reactors, Hill said.

“The U.S. was one of the leading countries in starting this collaboration, and it has grown significantly,” Hill said. ​“In the past two decades, the GIF has focused primarily on researching and developing advanced reactor technology. It is especially timely for the U.S. to assume leadership when we are moving several next-generation reactors to the demonstration phase. Adapting GIF collaborations to this new phase will be a primary goal heading into 2022.”

GIF experts from all countries work on technical projects, capability working groups and topical task forces to share critical research, information and experiences. Along with Hill and Feng, seven other Argonne staff members are serving as U.S. representatives in the GIF.

Because advanced nuclear reactors will eventually be deployed internationally, GIF is working to standardize as many aspects of the process as possible, including licensing regulations.

“Argonne scientists are using their knowledge and capabilities on advanced reactors to make progress in every way we can across a wide range of GIF groups on an international level,” Hill added.

Advanced nuclear reactors are key to a clean energy future

Harnessing the potential of nuclear power — which emits zero carbon dioxide (CO2) — could be key to meeting climate change goals in the U.S and around the world. In the U.S alone, nuclear power comprises 20% of all electricity.

Currently the U.S. is powered by 94 traditional, light water reactors that use normal water as both a coolant and neutron moderator. Nuclear reactors that are even safer, more sustainable, more efficient and less costly open the door for expanding their use in generating more clean energy worldwide.

Some of the spotlight is on fast reactors that have the potential of delivering 100 times more energy per an initial quantity of uranium than today’s reactors and recycling the fuel while generating electricity.

“Argonne is at the center of fast reactor development,” said Temitope Taiwo, director of Argonne’s NSE division. ​“Most of the Generation IV advanced reactor systems have origins in designs developed by Argonne scientists, including those now perfected by other national laboratories and countries.”

In his role as fast reactor national technical director, Feng will focus on developing the technology to move fast reactors closer to commercialization, which means working closely with the nuclear industry and collaborating with other national laboratories, he said.

“Argonne has the people, capability and experience to advance these fast reactors toward commercialization, but more investments in demonstrations are needed,” Feng said. ​“My goal is to anticipate and develop the fast reactor technologies needed by industry to license and build these reactors.”

Argonne also has a long history in developing the materials and manufacturing processes that are necessary to move nuclear reactors forward, Li said.

“Advanced reactors often have to withstand a corrosive environment, high radiation field and high temperatures that are beyond capabilities of current nuclear reactors,” Li said. ​“We are developing materials that can survive such conditions.”

These materials also have the potential to extend the life of the current fleet that are often at risk of premature closures, Li said.

Collaboration on every piece of the process has laid the groundwork for transitioning reactors from development to demonstration.

Argonne is partnering with TerraPower and X-energy, under the DOE Advanced Reactor Demonstration Program, to build two advanced nuclear reactors that can be operational within seven years. In 2020, the DOE awarded each company $80 million in initial funding for the public-private partnership. The projects are intended for commercial demonstration of the Natrium and Xe-100 reactors, respectively, as part of the $3.2 billion allocated for full funding of the Advanced Reactor Demonstration Program in the $1 trillion infrastructure bill recently signed into law by President Joe Biden.

Such partnerships are fundamental to moving next-generation reactors toward the commercial sector and positioning the U.S. as a leader in the competitive nuclear energy market, Hill said.

“Russia and China also have nuclear demonstration projects under way and other countries are following,” Hill said. ​“It’s important for the U.S. to take a leadership role in demonstrating and deploying these new reactor technologies.”

The U.S. Department of Energy’s Office of Nuclear Energy has recently selected three Argonne scientists to principal roles in ushering in the next generation of nuclear reactors that could fill a crucial energy niche.
January 18, 2022 | Nuclear Engineering, Nuclear Reactors, Argonne Climate News 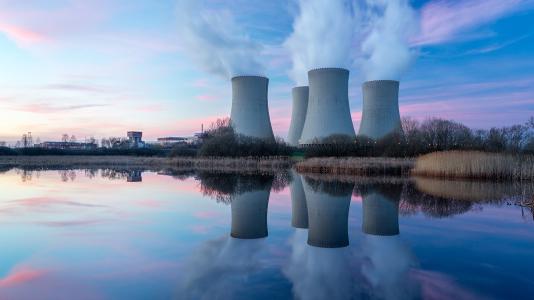