By
Leah Hesla
|
August 30, 2022
A member of two national quantum research collaborations, Choy is creating technologies to boost the performance of quantum sensors.

Jennifer Choy makes atom-size antennas. They bear no resemblance to the telescoping rod that transmits pop hits through a portable stereo. But functionally, they’re similar. They’re quantum sensors, picking up tiny electromagnetic signals and relaying them in a way we can measure.

How tiny a signal? A quantum sensor could discern temperature changes in a single cell of human tissue or even magnetic fields originating at Earth’s core.

Jennifer Choy, a scientist at the University of Wisconsin–Madison, is developing technologies that could lead to ultraprecise accelerometers and magnetometers for navigation and for probing minuscule changes in a material’s electromagnetic fields.

­“You can think of these quantum sensors as an atomic scale probe that allows you to be sensitive to and measure really localized changes in magnetic fields,” Choy said. ​“And you can extend your measurements to probe macroscopic magnetic features and other physical parameters like mechanical strain and temperature.”

“Quantum-enabled devices have both near-term applications and longer-term promise. That full spectrum of having both near-term, very tangible progress and impactful, long-term vision is exciting.” — Jennifer Choy, University of Wisconsin–Madison

Taking advantage of atoms’ quantum nature — which reveals itself only at nature’s smallest scales — and their sensitivity to external disturbances, these sensors exhibit extraordinary accuracy and precision, making their traditional counterparts look like blunt instruments by comparison.

For Choy, the challenge is to boost the efficiency with which these invisible instruments transmit information. The research is equal parts physics discovery and engineering, she says.

“I find the work exciting because it’s a good fit for the kind of hodgepodge training that I had,” said Choy, who is a member of both Q-NEXT, a U.S. Department of Energy (DOE) National Quantum Information Science Research Center led by DOE’s Argonne National Laboratory, and the National Science Foundation’s Quantum Leap Challenge Institute for Hybrid Quantum Architectures and Networks, or HQAN. ​“I’m an applied physicist by training, and I don’t categorize myself as purely a physicist or engineer. But I really enjoy that intersection of fundamental science and engineering work.”

Choy works on quantum sensors in which electrons in quantum materials act as the antenna. The information they pick up can be read through their interactions with photons, the massless particles that carry electromagnetic information.

The firmer the handshake between the electron and photon, the clearer the transmission.

When the electron receives a particular signal, it absorbs the photon’s energy. Shoomp! The energized electron rockets to a higher rung on the atomic energy ladder. When it comes time to dissipate the energy, the electron drops from that upper rung to the ground — thwop! — and the pent-up energy is released as a photon of a particular color.

The scientists read the light, measuring its properties — such as intensity and wavelength — to interpret the original signal.

As a member of Q-NEXT, Choy is engineering sensors that take the form of atom-sized holes in a diamond created by the removal of individual carbon atoms. The vacancy and an adjacent atom together trap a pair of electrons — the atomic antenna — from neighboring atoms.

The energy absorbed by the electron gives the material a particular hue, which is why these vacancy-based sensors are often called color centers.

The energies of the trapped electrons are especially sensitive to nearby changes in magnetic field, temperature and strain. However, their sensitivity also renders them susceptible to other environmental factors that can degrade the measurement performance. That’s why engineering color centers is a delicate balancing act: ensuring that the electrons respond strongly to the sensing target on one hand while minimizing their responses to undesired background noise on the other.

She’s also engineering structures that could funnel photons in and out of these color centers efficiently, improving the sensor’s ability to both collect signals and emit light. The more and the faster the electron can absorb and emit the photons, the stronger the signal.

The different photonic structures that can be realized in diamond sound like sophisticated, atom-scale tinker toys: nanowires; tiny metallic resonators applied near the vacancy; a layer of specially designed silicon added on top of diamond.

Each of these architectural marvels aims to facilitate the electron-photon handshake.

“The use of color centers for sensing has expanded to directions as varied as biosensing, condensed-matter studies and dark-matter detection over the past decade, and it is still a field that’s rich in both fundamental and applied research,” Choy said.

As a member of HQAN, Choy is developing a different class of quantum devices called a quantum metamaterial.

Quantum metamaterials rely on an ensemble of closely packed, photon-emitting atoms. These quantum emitters can be neutral atoms, charged atoms or systems such as color centers.

They exhibit collective behavior when interacting with a common mode of light. Choy and her collaborators are working on accurately positioning the metamaterials’ color centers and tailoring their properties in a way that neighboring emitters become indistinguishable from one another, behaving as a single unit.

“The emitters behave collectively. This allows us to control the speed at which they radiate photons — with far more control than when they’re isolated,” Choy said. ​“There are no individual features anymore.”

With photon-emitting atoms working cooperatively, a quantum sensor could send a stronger, amplified, unified signal — one that responds to a single, incoming photon.

“We’re interested in quantum metamaterials as a way to greatly enhance and control light-matter interaction with quantum systems,” Choy said. ​“This can enable the ability to engineer a collective optical response based on a quantum state as well as extend the interaction range between quantum systems.”

Choy’s interest in quantum sensing began when she was a grad student at Harvard, where she earned master’s and doctoral degrees in applied physics. She worked in Marko Loncar’s lab developing diamond-based photonic devices.

“After grad school I realized I really enjoy hands-on work and wanted to do more of that. But I also wanted to have a better understanding of how the research that I do can further practical applications,” she said.

So she went to work at Draper Lab in 2013, a not-for-profit organization in Cambridge, Massachusetts. There, she researched quantum sensing to develop precision accelerometers, gyroscopes and atomic clocks.

“The atomic clock, which serves as the basis of how the second is defined and is used by satellites in the GPS constellation, is an example where a quantum technology has completely changed our lives,” she said. ​“Now we want to explore other transformative applications of quantum sensors, some of which require engineering solutions in order to maintain their best performance outside of the lab.”

In 2019, Choy joined the faculty of the University of Wisconsin–Madison, where she continues to advance quantum-sensor performance and promote quantum education and workforce development.

“Quantum science and engineering is a field that can advance fundamental understanding and create enabling technologies for many disciplines in science and engineering. It’s great for providing the next generation of scientists and engineers with well-rounded and multidisciplinary training,” she said. ​“Quantum-enabled devices have both near-term applications and longer-term promise. That full spectrum of having both near-term, very tangible progress and impactful, long-term vision is exciting.”

Quantum repeaters and their role in information technology 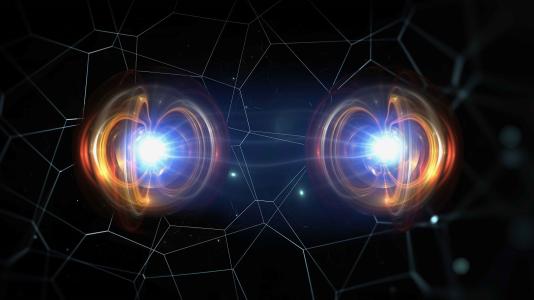