January 6, 2022
A new version of the Energy Exascale Earth System Model (E3SM) is two times faster than the previous version.

The Earth — with its myriad interactions of atmosphere, oceans, land and ice components — presents an extraordinarily complex system for investigation. For researchers, simulating the dynamics of these systems has presented a process that is just as complex. But today, Earth system models capable of weather-scale resolution take advantage of powerful new computers to simulate variations in Earth systems and anticipate decade-scale changes that will critically impact the U.S. energy sector in coming years.

Scientists at the U.S. Department of Energy’s (DOE) Argonne National Laboratory are part of a team that developed Version 2 of the Energy Exascale Earth System Model (E3SMv2). Released to the scientific community in late September, the model runs more than two times faster than its predecessor (E3SMv1).

“It’s unusual for a new version of a major climate model to be faster than its predecessor,” said Argonne climate scientist Robert Jacob, who leads the Infrastructure Group within E3SM. ​“Climate model developers usually anticipate computing advances and add features or resolution that make the model wind up with the same speed or slower. This time, advances in the algorithms resulted in a model almost twice as fast for the same simulation quality.”

“It’s unusual for a new version of a major climate model to be faster than its predecessor. Climate model developers usually anticipate computing advances and add features or resolution that make the model wind up with the same speed or slower. This time, advances in the algorithms resulted in a model almost twice as fast for the same simulation quality.” — Robert Jacob, Argonne climate scientist

“E3SMv2 allows us to more realistically simulate the present, which gives us more confidence to simulate the future,” said David Bader, a scientist at DOE’s Lawrence Livermore National Laboratory in California and overall lead of the E3SM project.

“Dust generation from dry soils is closely linked to drought events and land use and land cover changes,” said Argonne principal atmospheric and climate scientist Yan Feng, who led much of that work. ​“Airborne dust particles play an important role in modulating the Earth’s energy balance, acting as nuclei for cloud formation.”

In addition, the team added to the model the ability to refine the resolution over particular areas of the globe, resulting in two fully coupled configurations: a 100 kilometer (km) globally uniform resolution atmosphere model and a regionally refined model (RRM) with a resolution of 25 km over North America and 100 km elsewhere. The refined mesh configuration is particularly well suited for DOE applications.

Obtaining results from the RRM and uniform simulations is also faster.

“E3SMv2 uses a new input/output (I/O) library, called SCORPIO, that incorporates enhanced data caching and rearranges algorithms, allowing simulations to write data at approximately an order of magnitude faster than E3SM version 1,” said lead SCORPIO developer and Argonne scientist Jayesh Krishna. ​“In E3SMv2, I/O only occupies about 1 to 2 percent of the model execution time for production simulations. The model users can focus on writing out all the simulation data required for scientific analysis without worrying about I/O performance.”

The team is now conducting a simulation campaign of climate change using E3SMv2. Team members have completed simulations that look several thousands of years into the future, and they are planning to run for several thousand more. 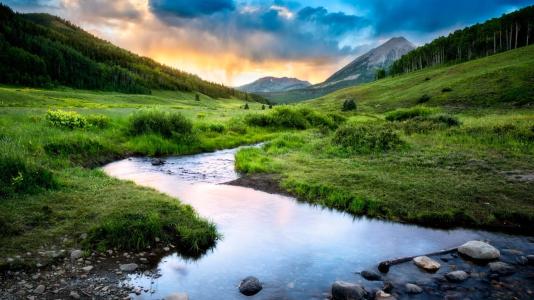