The DDA structure is a counterpart of metallic disk loaded accelerating structure. However, since the EM field can penetrate through the dielectric disk forming the coupling between cells, it exhibits different accelerating properties.

The DDA structure prefers a higher dielectric constant. With a reasonable loss tangent, it can improve the shunt impedance of the DLA structure by a factor of 4 at a cost of fabrication complexity. The most important property of the DDA is that it maintains such a high shunt impedance at a relatively high group velocity, which is critical for Short-Pulse, Two-Beam Wakefield Acceleration, since the short-pulse TBA requires a short rf filling time, in order to achieve a high RF-to-Beam efficiency. Details of the DDA study refer to [Jiahang Shao, et al, Study of A Dielectric Disk Structure for Short Pulse Two-Beam Acceleration, Proceedings of IPAC2018, Vancouver, BC, Canada, TUPML005].

The study of using dielectric-loaded circular waveguide for particle acceleration can be traced back to the early 1950’s. In recent years, because of its geometrical simplicity and availability of low loss dielectrics, the theoretical and experimental studies of the dielectric based accelerators have been intensively revived. One advantage for using dielectric materials is their potentially higher breakdown threshold than the metals. The dielectric-lined circular waveguide is the most commonly used dielectric particle accelerator concept. It consists of a cylindrical ceramic tube (or tubes) inserted into a cylindrical copper waveguide. The fundamental accelerating mode is TM01 mode. The synchronization with the beam is determined by the combination of frequency, dielectric constant, beam aperture and the wall thickness of dielectric tube. Because of its simplicity, the DLA structure can be easily scaled from Microwave frequency to THz régime. In addition to the circular DLA structure, rectangular DLA structures have also received much interest. Details of the DLA study at the AWA are summarized in [Chunguang Jing, Dielectric Wakefield Accelerators, Reviews of Accelerator Science and Technology, Vol. 9 (2016), pp. 127–149].

The electromagnetic properties of a medium in most cases are characterized by the permittivity ε (response to electric field) and the permeability μ (response to magnetic field). Typically ε and μ are positive or tensors with positive values for most frequencies.

It is possible to create a Metamaterial with simultaneously negative ε and μ. Metamaterials with simultaneously negative values for ε and μ can be artificially constructed. The arrays of sub-wavelength elements respond to electromagnetic fields like a medium with dispersive (frequency dependent) permittivity and permeability. Split ring resonators create an effective magnetic material with μ negative at certain frequencies. Artificial ε can be produced for example by wire arrays. Propagating waves in Metamaterial exhibit several unusual effects like the reversed Doppler Effect, reversed Cherenkov radiation and negative refraction. Details of the Metamaterial study in the AWA group refer to [Sergey Antipov, et al, Observation of Wakefield Generation in Left-Handed Band Of Metamaterial-Loaded Waveguide”, J. Appl. Phys. 104 014901 (2008)]. 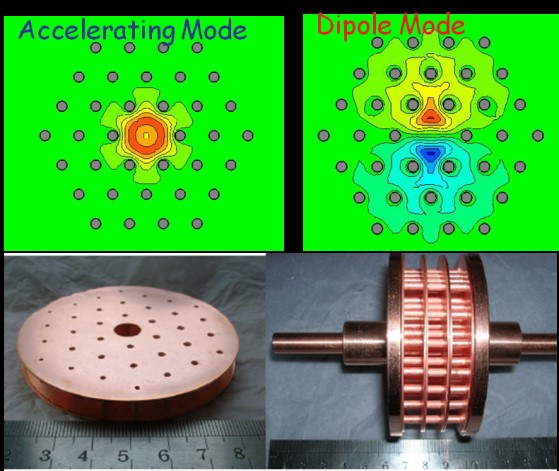 Photonic Band Gap (PBG) structures for particle acceleration have been intensively investigated. The capability of single mode confinement makes it very attractive for future particle accelerator designs which require large transverse deflecting mode suppression. In general, a PBGaccelerating structure consists of a periodic array of metallic rods. Due to the periodicity of the structure, a range of frequency bands (band gaps) exist through which it is forbidden for electromagnetic radiation to propagate. In order to allow particles to move through the structure, one rod is removed from the lattice to create a beam channel. This removal creates a defect in the ​“crystal” where the accelerating mode will be confined. The lattice parameters can be chosen in such a way that neither the transverse modes nor the high order monopole modes are confined in the beam channel. Details of the DLA study in the AWA group refer to [Chunguang Jing, et al,  Observation of Wakefields in A Beam-Driven Photonic Band Gap Accelerating Structure, Phys. Rev. ST Accel. Beams 12, 121302 (2009)].