A digital twin is an analytic representation of an engineered system that when used in combination with sensor data provides an improved performance for tasks such as diagnosing operational anomalies, understanding system health, and improving system efficiency. The application of the digital twin concept to a nuclear facility is being pursued under the traditional domains of physical security, operations, maintenance, and safety.

A data-driven digital twin is an analytic model constructed using sensor data taken from plant operating history. It is a representation of the physical relationship among plant variables and is constructed without the inclusion of first-principles models. The data-driven digital twin provides a valuable modeling capability when the physics of operation are not amenable to modeling by first principles. This is the case when the physics are poorly understood and make development of a model of the required accuracy difficult. 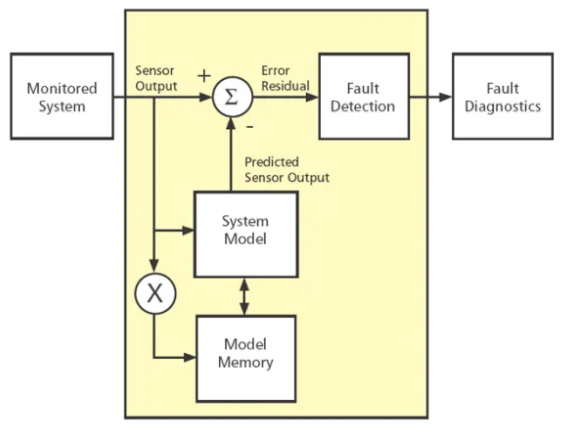 The MSET technology was pioneered at Argonne in the 1990’s and ultimately led to a commercial product offered by the Smart Signal, which was a startup company. The method has seen wide distribution across industries that include oil and gas, aviation, and energy.

The neural network is another form of data-driven digital twin that the NSE Division has applied successfully to solve industry problems. Its utility derives from the ability to learn non-linear relationships for natural phenomena without having to invoke physics-based models. A notion of training algorithm appears in the figure.

The use of an ANN for performance improvement of a utility owned boiling water reactor (BWR) is described under performance optimization. That application involves the types of practical issues that arise in making use of data-driven models. The typical issues that arise and need to be addressed include choosing an appropriate model order to avoid over fitting and achieve good generalization. The accuracy of the resulting model ends up being dependent on the data set size. Another important issue is the identification of the feature space that is consistent with the size of the data set.

When a physics-based digital twin is not practical, but a model of plant dynamic behavior is needed, then the Dynamic Mode Decomposition (DMD) method can provide this model. The method has applicability for control problems where a state space description of the system is required, as in model-based predictive control. The DMD method synthesizes the state space matrices for the system using a system identification approach that tracks system behavior through an observation window that moves in time with the dynamic system as it evolves.

The DMD method potentially provides a higher fidelity model than what is achievable compared to a model developed from first principles. The fundamental reason is that only measurement uncertainty lies between the DMD model and the plant dynamics. The DMD method does, however, require a sensor set that is sufficiently rich that dynamic modes are present in the measurement data train. The DMD method is best suited for performance improvement during normal operation and would not necessarily be relied upon for control during fast-acting plant upset events.

A physics-based digital twin is an analytic model constructed from first principles, which may include conservation balances and constitutive relations. It may also incorporate plant historical operating data to augment the analytic relationships and to validate them.

A physics-based digital twin has inherent advantages over a data-driven model and may be preferred when the additional development effort required is acceptable.

Particularly when it comes to system monitoring, this is the collective experience of utilities over the past ten years. The complicating factors are the inherent variability of operation (both equipment alignment and operating condition), which can confound a data-driven approach, and the absence of theoretical guidelines for determining what constitutes an adequate sensor set. These aspects are eminently addressable under the physics-based approach and have influenced the direction of work in the NSE Division.

The physics-based digital twin has application to both operation and maintenance. Under operation it provides a representation of the plant around which a control algorithm can manage important process variables. Under maintenance the digital twin provides a basis for automated reasoning for assessing the health of plant components.