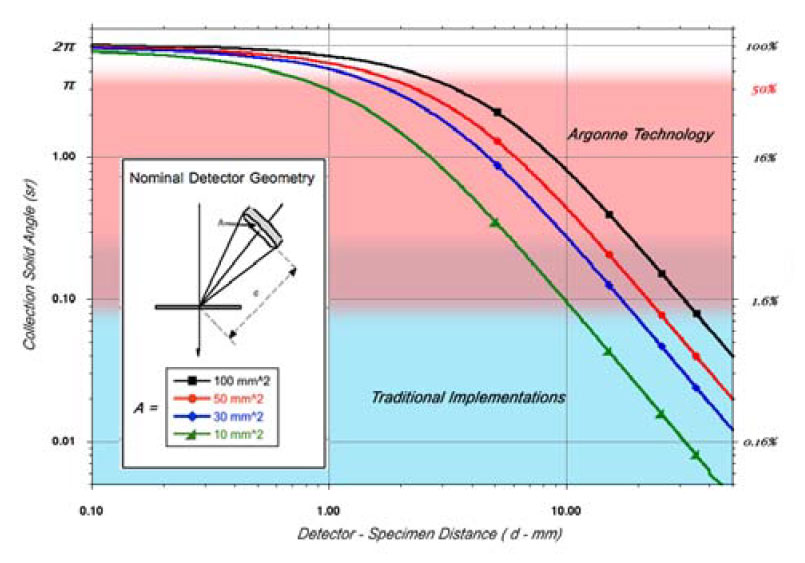 Scanning Electron Microscopes (SEMs) are widely used by materials researchers. Frequently fitted with ancillary x‐ray detectors for elemental analysis of materials, these instruments are limited in their nanoscale analytical sensitivity because they capture less than 2% of the meager x‐ray signals generated when ultra small particles and thin films are probed by the minute electron beams in today’s SEMs. To address this limitation, scientists at Argonne National Laboratory’s Electron Microscopy Center invented a new x‐ray detection system that increases the detection capability of SEMs during nanomaterials analysis.

Traditional implementations of solid state x‐ray detectors in SEMs capture only about 0.05–0.1 sR (<2%) of the signal generated, as indicated by the blue shaded region in the figure below. Argonne’s technology overcomes this limitation through an innovative new geometry and positioning of the x‐ray detection system.

For nanoparticles and thin film analysis, this invention facilitates capture of more than π steradians (sR) or ~50% of available x‐ray signal, encompassing both the blue and red regions in the figure. The technology also features a proprietary electron shield to protect the system from electrons hitting the detector and in addition, integrates electron detection to provide the enhanced capability to image the nanoparticles and thin films as well as identify their elemental composition. The Argonne system can be retrofitted onto existing SEMs or provided as an accessory detector for new SEMs.

Argonne’s π Steradian X‐Ray Detection System can substantially reduce the time and cost for conducting routine analysis of nanomaterials by increasing detection capabilities of SEMs at the nanoscale by up to 500%. It enables highresolution rapid imaging and analysis, which facilitate new discoveries and scientific understanding of nanomaterials not practical using conventional detector implementations. The new system also accelerates ​“materials design and discovery” by enabling effective characterization of nanostructures engineered to evoke specific functionality in a timely fashion, in sync with the modeling and synthesis steps.

The cost of the new Argonne detector system is estimated to be an incremental addition to the cost of a traditional detector.